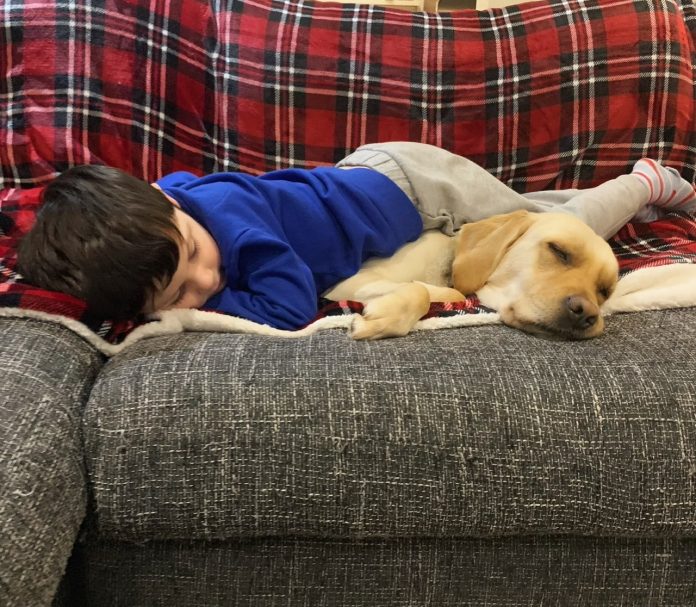 Thanks to his autism assistance dog Thunda, seven-year-old Franklin and his family can enjoy normal activities like going to the park. And now other families with children with autism can follow his mum’s inspirational Instagram blog posts documenting their moving story.

Diagnosed with autism at the age of two, and later with learning difficulties and sensory processing disorder, Franklin Jordan’s story follows a trajectory that will be all too familiar to the parents of children with the condition.

As a toddler, Franklin was different from other children. He struggled with eye contact and communication and didn’t respond to his name. He regularly “stimmed” by spinning in circles, flapping his arms and jumping up and down. After the shock of the diagnosis, and the worry of what the future might hold for their son, parents Jo and Steve got on with the practicalities of giving Franklin the best life possible. That’s when Jo started her blog, Spinning in Circles.

“Going out and about, going into shops, going to new places, has always been really difficult for Franklin”

She says, “I started the blog when he was young. We had no idea what to expect. I wanted to show other people the experience we have had with Franklin, to raise awareness, and give parents a bit of comfort to show that they are not the only ones going through it.”

Franklin started at mainstream school but after two years was moved to a specialist autism school near the Jordan’s home in Bolton. With a class size of just seven, a teacher and four teaching assistants, Franklin started getting the support he needed and has begun to thrive.

However, his biggest problem was leaving the house. “Going out and about, going into shops, going to new places, has always been really difficult for Franklin,” says Jo. “There would be months when we couldn’t get him into the car or out of the house; it was awful. He’d have the most terrible meltdowns in shops. A lot of it was frustration – he gets overwhelmed. He’s very sensitive and has to wear ear defenders as he can’t cope if his surroundings are too bright or too busy.” 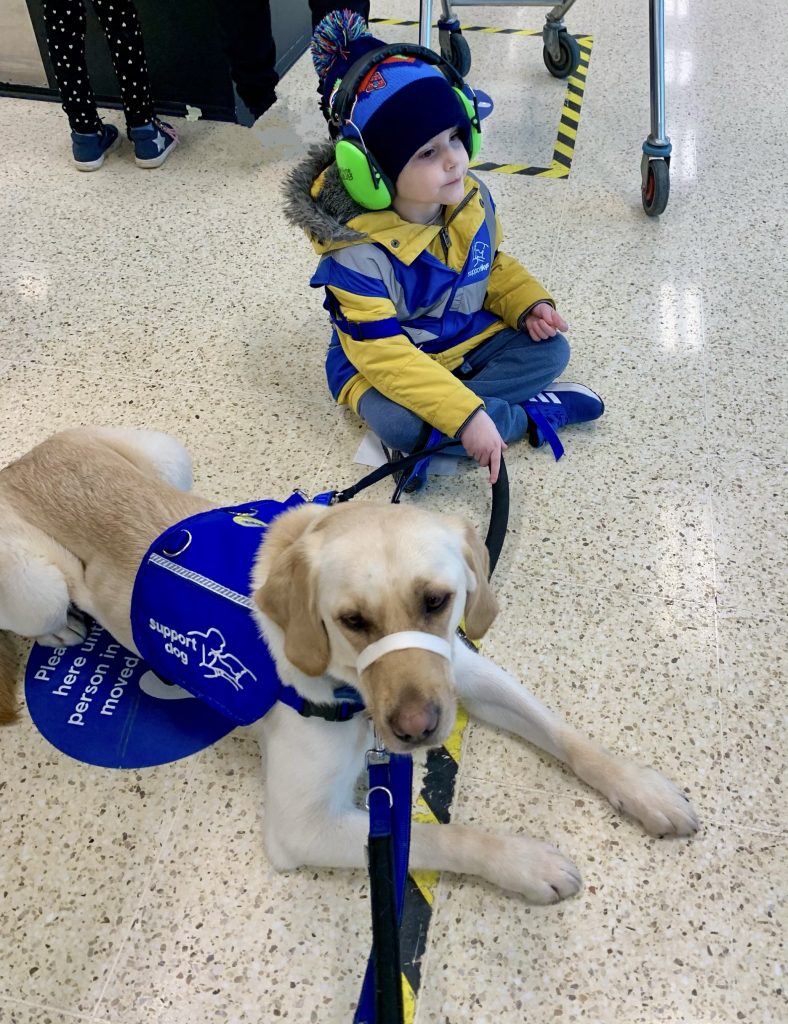 It was at that point Jo and Steve looked around for some four-legged support and found it with Support Dogs, a national charity which trains assistance dogs for children and adults with epilepsy, autism and physical disability.

“We read about the charity in a magazine,” says Jo. “We’d never had a dog as a family, so were not sure how Franklin would react to it. We were accepted onto the programme, and although we had to wait a while due to lockdown, when they were matched, Franklin instantly bonded with Thunda; they seemed so comfortable together.”

Training was intense but thorough, with Jo as Thunda as main handler, and the partnership qualified in September, lightening the load on Jo, and giving them more time to be a family. The Jordans also have a ten-year-old daughter, Tabitha.

“Even when Thunda is off lead having some free time he will look back to see Franklin, to check up on him”

Jo explains Thunda’s impact. “Before Thunda, at times we could never do things like going to the supermarket. Franklin could not cope with that. We could not get him out of the door. Now, thanks to the magic of Thunda he will go for walks, happily tethered to the dog. A simple trip to the supermarket is a run of the mill for most people but it’s amazing for us – we are starting small but hoping to build on this!”

Although boy and dog are a great partnership, they are not joined at the hip in the house. “Thunda is so laid back and chilled, and he loves to snuggle up with us on the sofa,” says Jo. “But as soon as Franklin makes a noise or gets upset or cries, Thunda always seems to know where he is and will go straight over to him.

“When we go out Franklin needs Thunda. Even when Thunda is off lead having some free time he will look back to see Franklin, to check up on him. 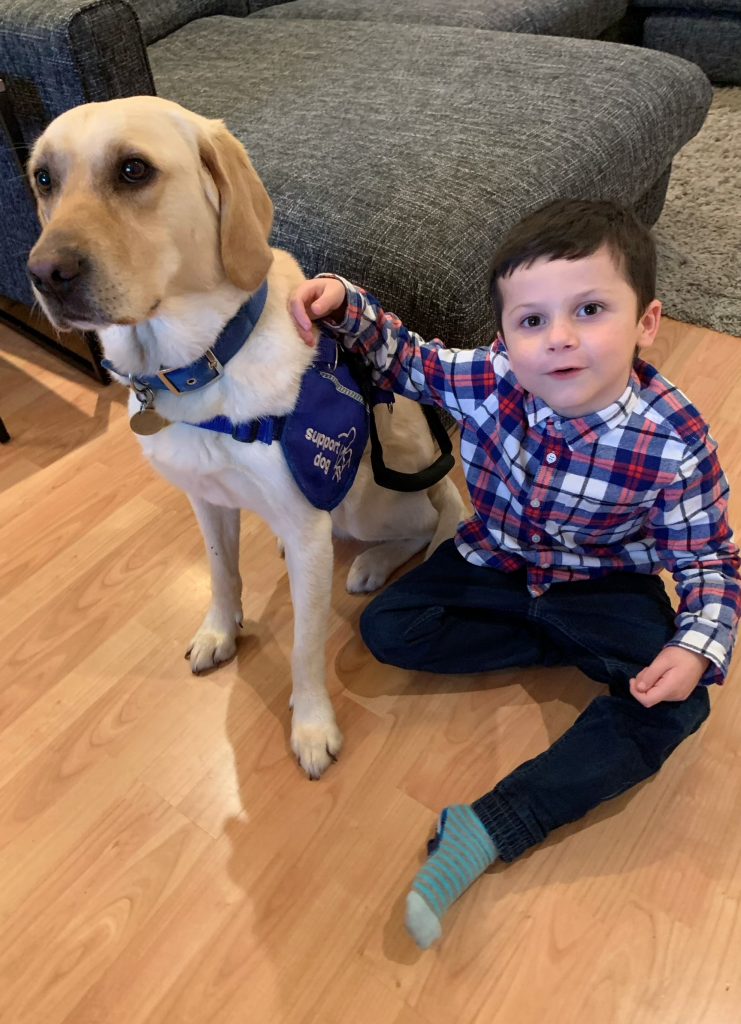 “We always used to be anxious when we went out. The whole time we were out we were waiting for him to become overwhelmed, so it was never enjoyable. It’s so different now, and I don’t think there could be a better dog for us.

“Thunda has become a huge part of our family over the last 12 months and is now a fully-fledged member of it. He has made the most incredible difference to Franklin’s life but also to Tabitha’s, mine and Steve’s and we couldn’t imagine life without him.

“He is the sweetest, gentlest, cuddliest dog with a tinge of bonkers thrown in when he’s playing out. When Support Dogs said they had found a perfect match for Franklin, they weren’t kidding! The bond they have made so quickly is remarkable.”