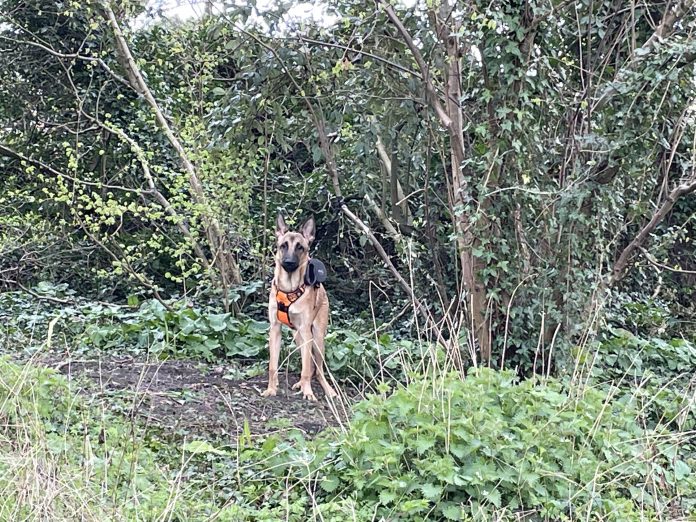 A young German Shepherd or Belgian Malinois cross, around a year old and with deformed back legs, was found tied to a tree at around 4pm on Sunday, 4 April. He was left on a secluded patch of land near Avoncroft Museum Of Historic Buildings in Redditch Road, Stoke Heath.

The dog, who has been named Defford after the police officer who helped him to safety, was first spotted by members of the museum’s team.

Zoe Willems, director of Avoncroft Museum, said, “We found him at the far end of the picnic field which is not part of the pay-for-entry site, and is not in regular use, only for special events and when reenactors camp for a special event like this weekend’s International Living History Festival. That’s the only reason we were there at the time – we wouldn’t otherwise go up to that part of the site, even on a weekly basis.” 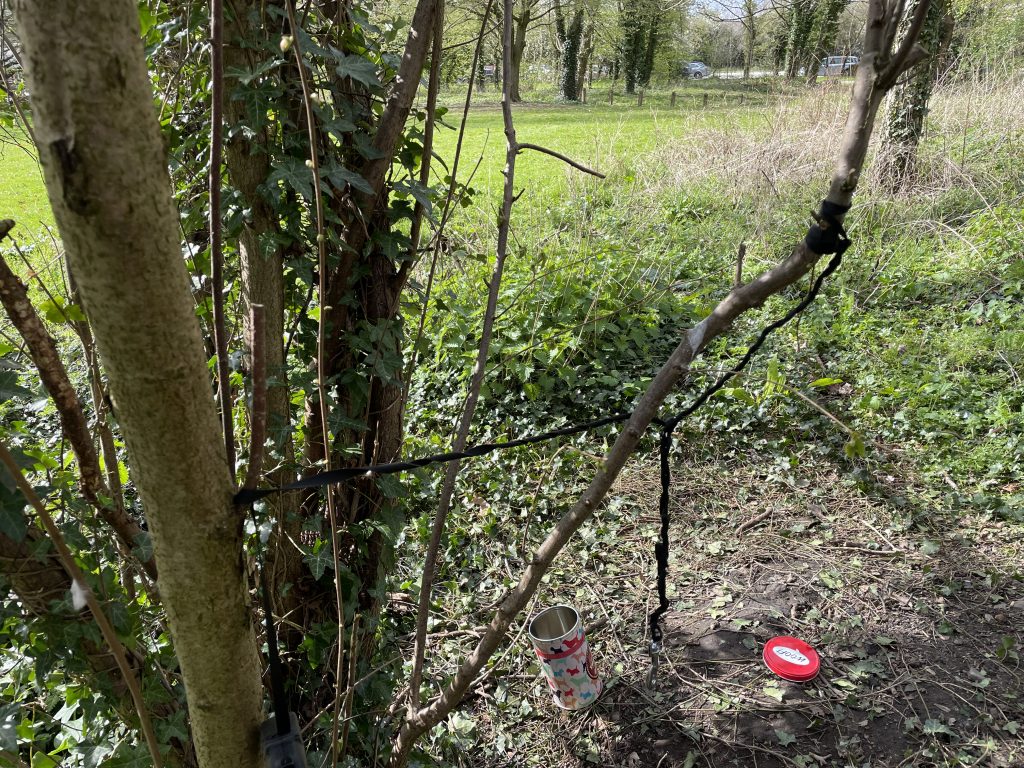 She added, “Defford was found tucked into the woodland edge of the field, so not immediately visible – had he not barked when we got closer we wouldn’t have known he was there.

“There was no food and water and we couldn’t see much mess so don’t think he was there that long, but he had clearly trodden down a circle through pacing when the lead allowed him to. However, he’d been there long enough to get the lead very twisted on itself and as you can see from pictures, he ended up unable to lie down or move very much at all.

“We fetched water and treats and made friends with him as he was understandably very wary and nervous. We then sat with him and walked him round the field – he is clearly a lovely dog, and has been looked after and loved – very good natured and actually very trusting once we’d made friends.” 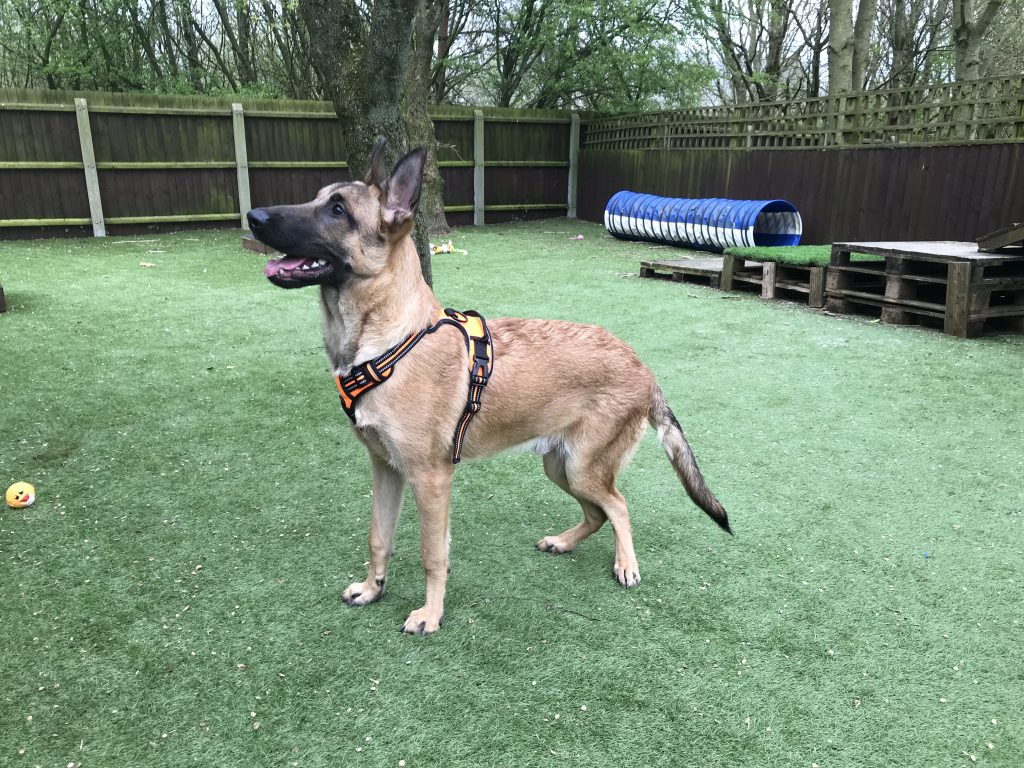 RSPCA Inspector Nicola Johnson, who is investigating, said, “We are very grateful to everyone who helped Defford. He is currently in RSPCA care and doing well.

“It really upsets me to think his owner had decided to just dump him like rubbish and simply walk away from their terrified pet.

“He must have been very confused and frightened to be tied up and abandoned like this. He has deformed rear legs and a very distinct walk so should be easily identifiable to anyone who has seen him before.

“He is such a sweet and gentle-natured dog. It’s heartbreaking to think someone has abandoned him because of his legs.” 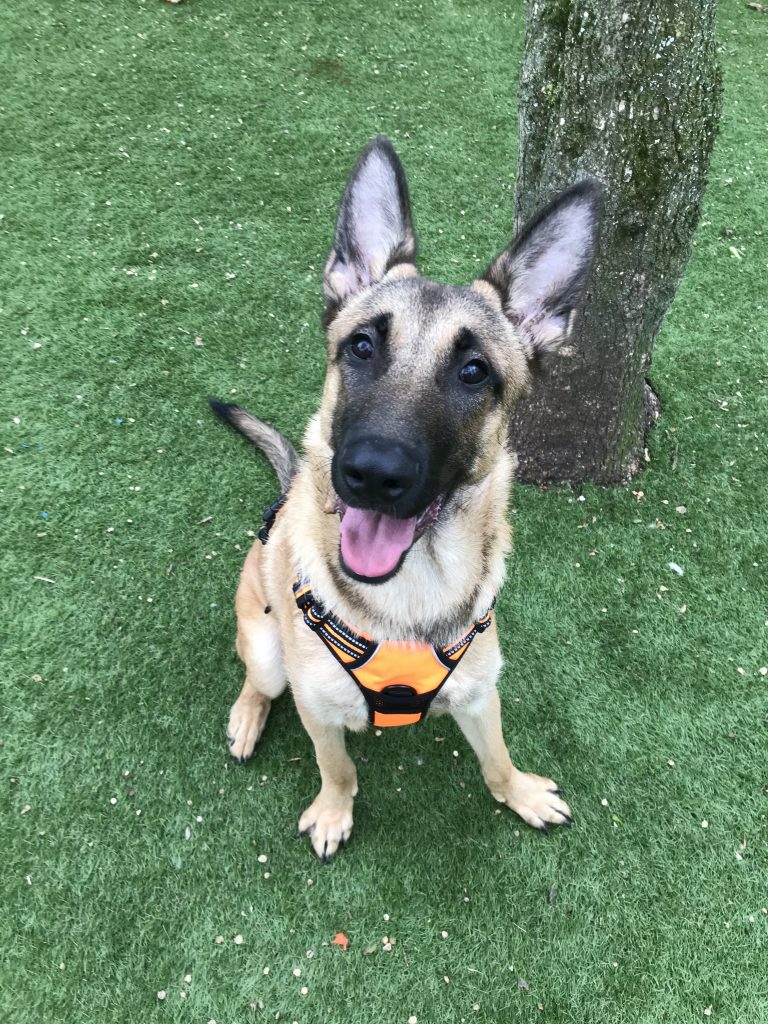 She added, “Unfortunately, dogs are often bred with their looks in mind and not their health and welfare, and in Defford’s case, his deformities may well be a result of poor breeding.

“During the pandemic, pet ownership surged with estimates of more than 3.2m people taking on new pets. With the worrying rise in prices and energy bills, and more people also returning to the workplace following lockdown restrictions, we fear the increased stress and pressures will see a rise in abandonment, neglect and even abuse of animals.

“He is microchipped and we have followed up on the information regarding his microchip and previous owner, but they have told us the details had not been updated upon them selling the dog, therefore our enquiries continue.

“I am appealing for anyone with any information on Defford and how he came to be abandoned to contact the RSPCA appeal line on 0300 123 8018.”