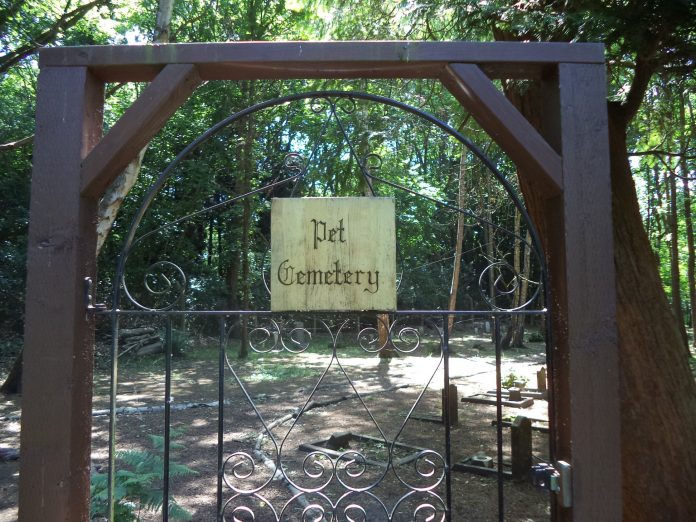 I will be honest and admit that the first thought my mind conjured up was that of a 1983 horror novel by Stephen King, which does in fact centre on an ancient burial ground some people unwittingly used to bury their deceased pets. It was adapted into a movie plus a remake and – spoiler alert – neither ends well.

Luckily, this is a far more pleasant story. I first heard of the Chobham Pet Cemetery, or what was left of it, through an email by local dog owner Frances Atherton. The Dogs Today office is based in Chobham, Surrey, and yet I had no idea the pet cemetery even existed.

“With the clearance of the woodland at the back of Little Heath following the building of the houses on the site of the old Little Heath Nursery, a pleasant walk has been created which my husband, myself and our dog have recently discovered,” she wrote. 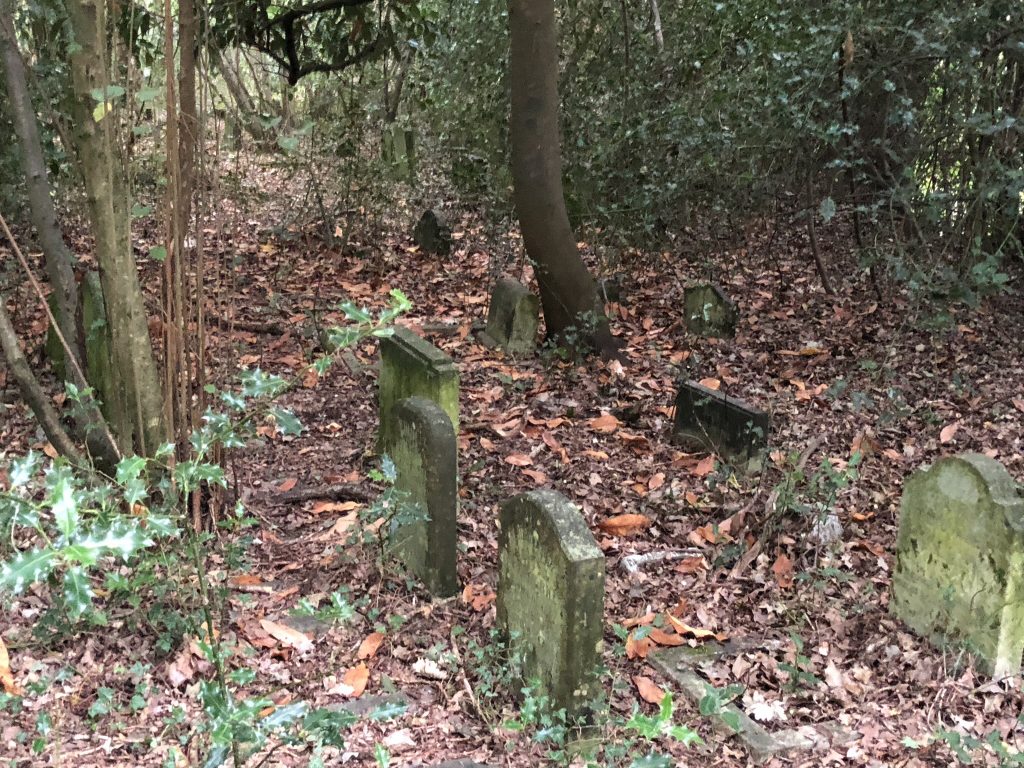 “Despite living in Chobham for 27 years, although we had known of its existence, we had never visited the old Pet Cemetery.

“What a revelation, but how poignant a place this is. It is sadly overgrown, although passable, but full of lots of old and not-so-old gravestones of dearly departed companions. For dog lovers such as ourselves it is a sad but lovely place, with many ghosts of dear departed loving companions present, to look fondly over us as we walk with Toffee.

Frances had found a large gravestone that seemed to be dedicated to a dog, Moffat Treasure, described as “a great friend” – but upon closer inspection she realised the derelict grave was actually for two dogs: Moffat Treasure and… Great Friend. The grave read:

They brought me real joy and happiness. 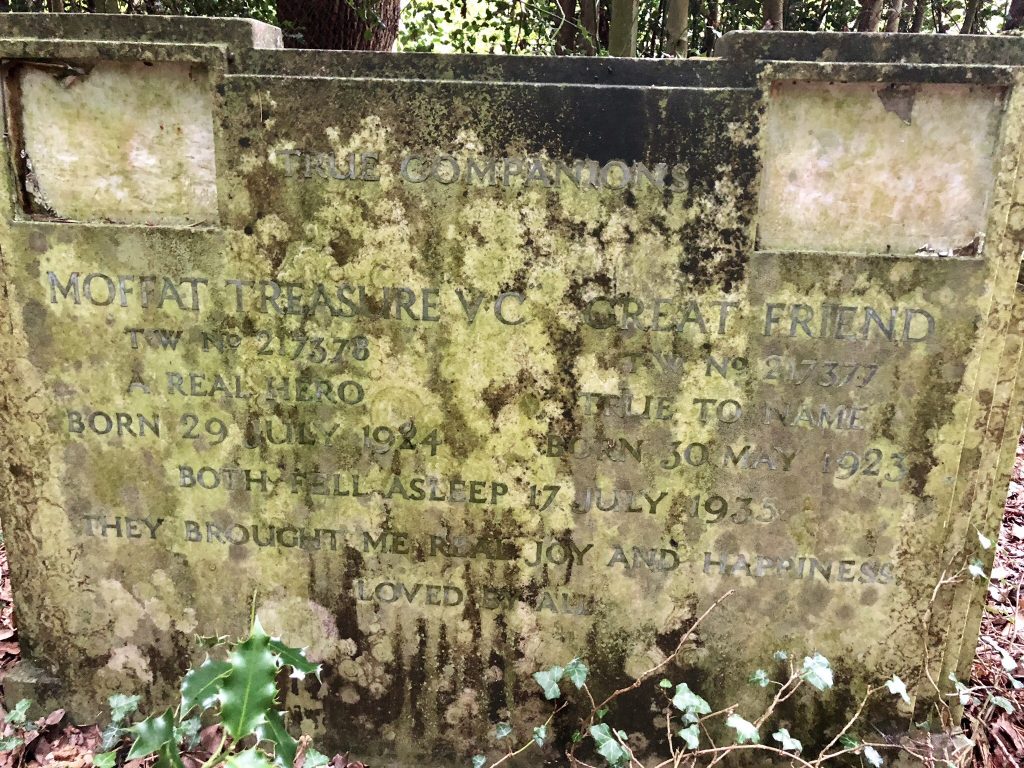 Her curiosity piqued, Frances did some research and found out that Moffat Treasure truly was a hero dog: he’d single-handedly stopped a runaway horse with cart in a busy London Street in 1930, avoiding damage and possibly injuries, or even death. For this deed – chronicled in the 1935 book Dog Heroes – Moffat Treasure was awarded the Brave Dog’s Collar by the Daily Mirror at Crufts in 1931.

“I think he was also awarded the doggy equivalent of a VC, and that the Tailwaggers Club presented both him and Great Friend with silver medallions – hence the TW numbers on the gravestone,” she said.

Sadly, as the Tailwaggers Club no longer exists, we were unable to contact someone in order to find out what Great Friend did to gain himself a medal as well. We know nothing of him past the mention in the Dog Heroes book, the fact he was ‘true to his name’, and that he somehow died on the same day as his companion Moffat Treasure in 1935. How they came to be buried in Chobham, as they lived in London until five years prior, is a bit of a mystery – though Frances has found something while researching. 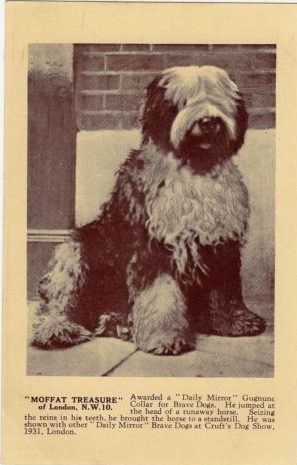 “Presumably Mr A Jinks, the owner, was living in Chobham or nearby in 1935,” she said. “I have found an Alfred Jinks through Ancestry UK, who was born about 1892 and died March 1947 in Surrey – not specifically Chobham, though. His timings fit!”

When Frances offered to accompany me to see the abandoned pet cemetery, I took the chance; I’d wanted to visit it, but on my own I’d risk getting hopelessly lost in the woodland… which is, by the way, the plot of another Stephen King novel. It turned out to be a wise move, because without a guide I would have never found it.

It was just as overgrown and derelict as she’d shown me through pictures, with dozens of graves – some toppled over, some with illegible writings, a lot of them hidden by vegetation and dead leaves, some dating back to the Thirties. 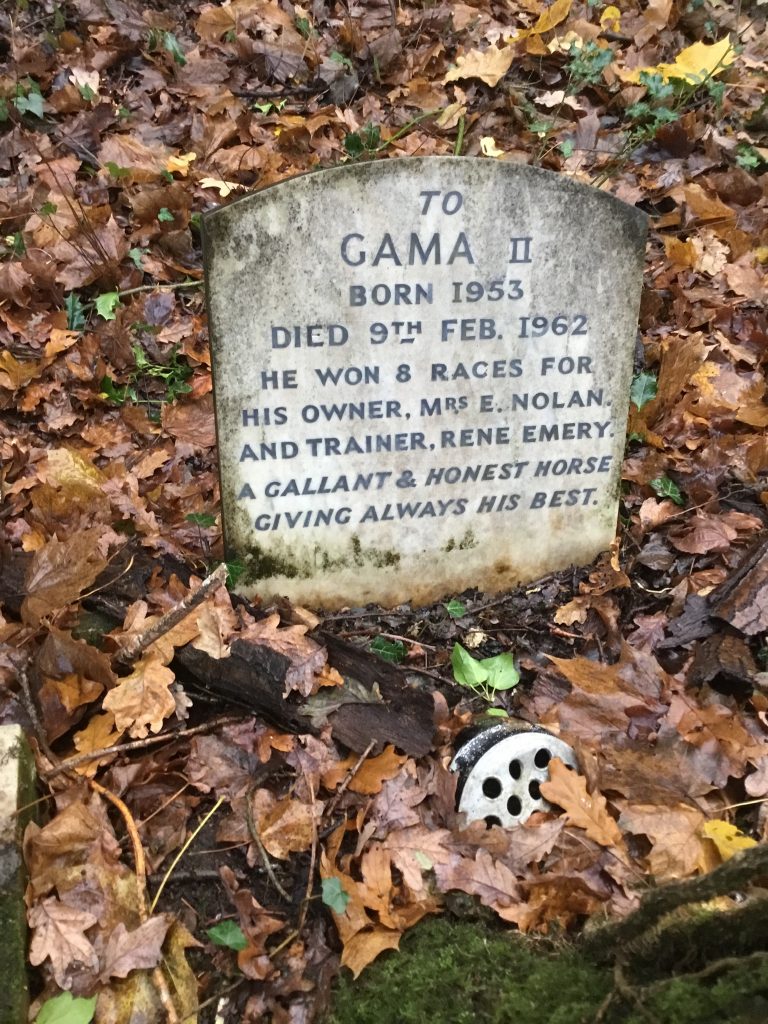 Most graves did not say what companion animal was buried there, but it is safe to bet it was mostly dogs and cats – although a horse’s grave turned up to be on site. The one grave I had come to see was immediately on our right past a shaky plank serving as a makeshift bridge, and by digging up some earth I found an inscription at the foot of the grave – telling of Moffat Treasure’s heroic deed.

Frances laughed when I showed her. “Oh, imagine the research I could have spared myself if I’d seen that!”

A brief walk amongst graves brought us to a memorial stone, dedicated to the eight Airedales of the pet cemetery’s founders: Peter, Sasha, Rover, Joy, Tony, Jock, Luckie and Prince. The founders themselves – Millicent May Baxter and her husband, Colonel R. H. R. Baxter – had their ashes laid to rest at the site. Sadly, the slab of stone dedicated to them was broken, although we could still make out the words.

Heart and soul of this garden.

At her own request, here rest the ashes of
Millicent May Baxter
Beloved wife of
Colonel R. H. N. Baxter
Who joined her dumb friends 7th January 1960.

The kiss of the Sun for pardon
The song of the birds for mirth
You’re nearer God’s heart in a garden
Than anywhere else on Earth. 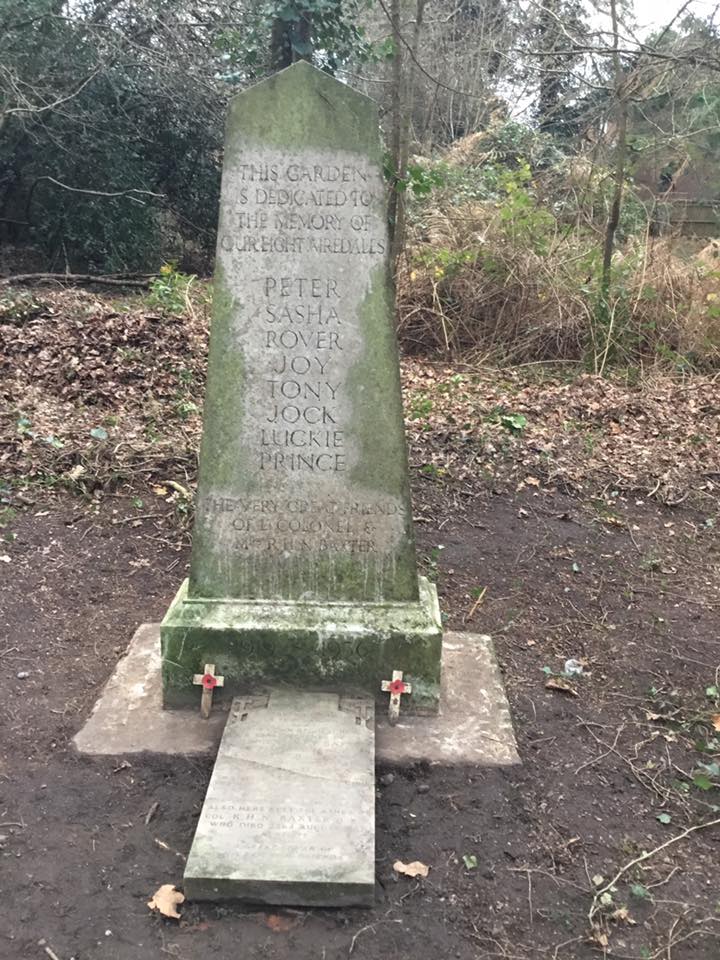 It was a cool October day, the sound of rain in our ears and the smell of dead leaves and earth permeating everything; it truly was a sobering sight, although Frances’ dog Toffee zooming back and forth kept us from growing too sad.

After the visit, I was quite eager to write about this small cemetery, and quickly found out a group of Chobham locals were talking quite excitedly about it. Several of them remembered the pet cemetery, which was still operational at least up to the Sixties – and there were some memories about the Baxters, too.

“Mrs Baxter was a customer of my parents and when my pet Collie died she insisted on it being buried here,” local Robert Hill said. “There was never a gravestone, but a photo was placed in a Summerhouse type building.” 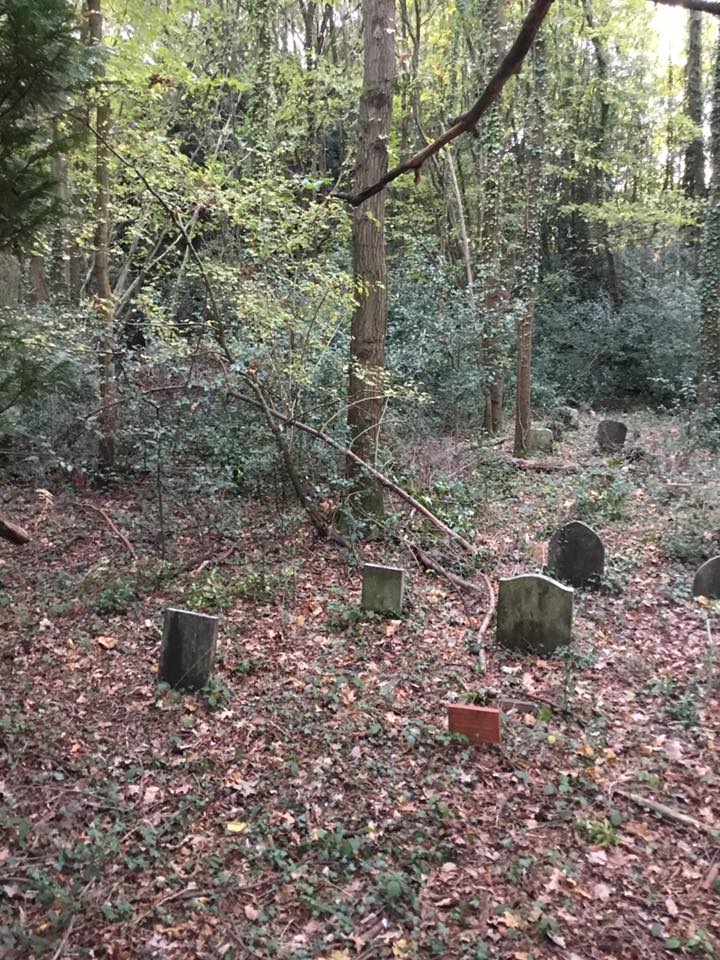 Another local, Kieron Hill, used his interest in military history to find more information on Robert Hugh Neville Baxter. According to his research, in 1914 he enlisted in to the Indian Army Reserve of Officers; the same year he was Lt. Col in the 127th Baluchistan Infantry, then in the Eastern Bengal State Railway Volunteer Rifles in 1916, and back to the Indian Army Reserve of Officers in 1919.

“I am guessing he was born in India in the times of the Great British Empire,” Kieron wrote. “He then turns up as a director of Overseas Cars Limited, a little different! It would be nice to get some of those cars at that price today…”

But they did more than just reminisce: soon they were talking about organising in order to fix up the small cemetery as well as they could. A group called Friends of Chobham Pet Cemetery was created on Facebook to coordinate the efforts to restore as much of possible of the old cemetery, clearing it of overgrown plants and fundraising for money to go into the conservation of this piece of the village’s history.

Group member Christine Stevens offered to pick me up from the office to visit the cemetery again, so that I could meet group founder Tommy Cooper, hard at work with a shovel and some tools to get dead leaves and undergrowth off the tombstones. He vividly remembered what it used to look like – showing me one half of an old iron gate hidden by vegetation, where the path leading in used to be, the building that used to be there.

“Some years back, someone stumbled upon this place and contacted a newspaper, convinced he’d found a children’s cemetery,” he said. “I suppose he thought so because of the size of these graves, but you have never met a child named Waggles, have you?”

The volunteers’ hard work has paid off. When I visited the cemetery again a few months later, the difference was stunning. 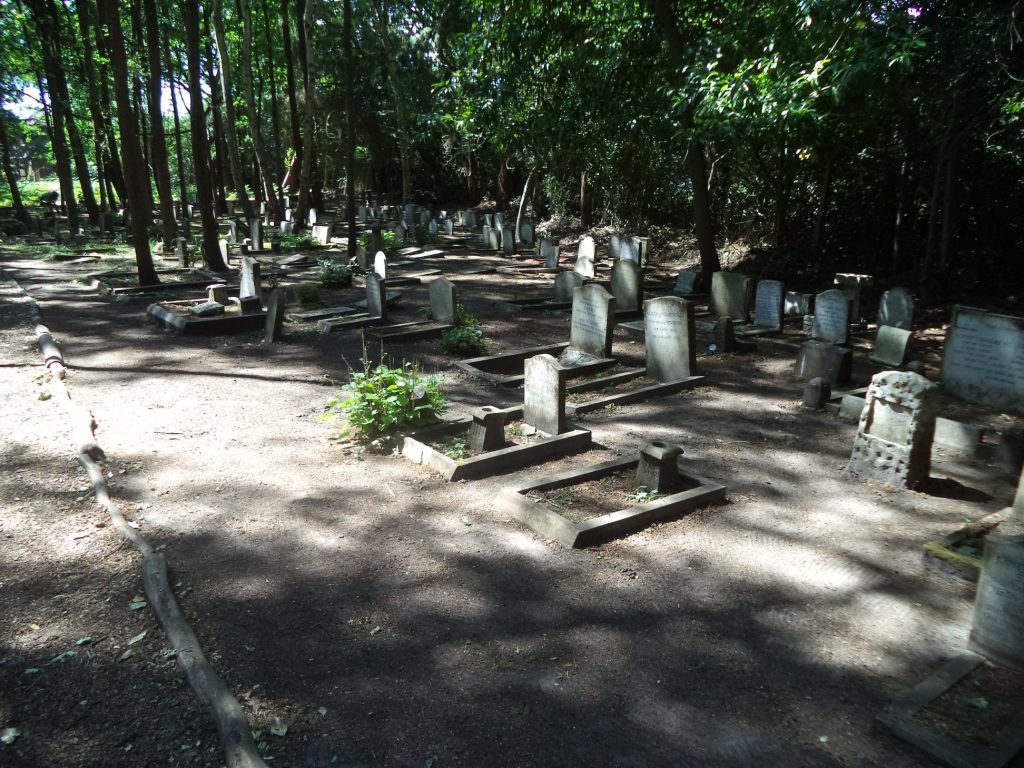 The shaky wooden plank that had served as a bridge was gone, replaced by a proper bridge, with railings and a gate. Across the bridge, past the iron gate, the vegetation that overran the place were gone, the small trees that had been growing among the graves cut down; their trunks were been used to mark a path through the cemetery, which was bigger than I’d imagined during my previous visit. The gravestones were being cleaned out, little by little.

Near the entrance there was a new wooden bench, an angel statue, a bird feeder. Tommy was there as well, planting some snowdrops by the new path. “We found a few new things,” he said, showing off his latest finding: a coffin handle, made of plastic. “The wood must have rotted away, but this was left,” he said.

The volunteers’ efforts unearthed more than that: there were a couple of small statues, including that of a tiny dog which was tucked under a stone bench that presented by ‘Mr and Mrs Taylor’, who knows when. 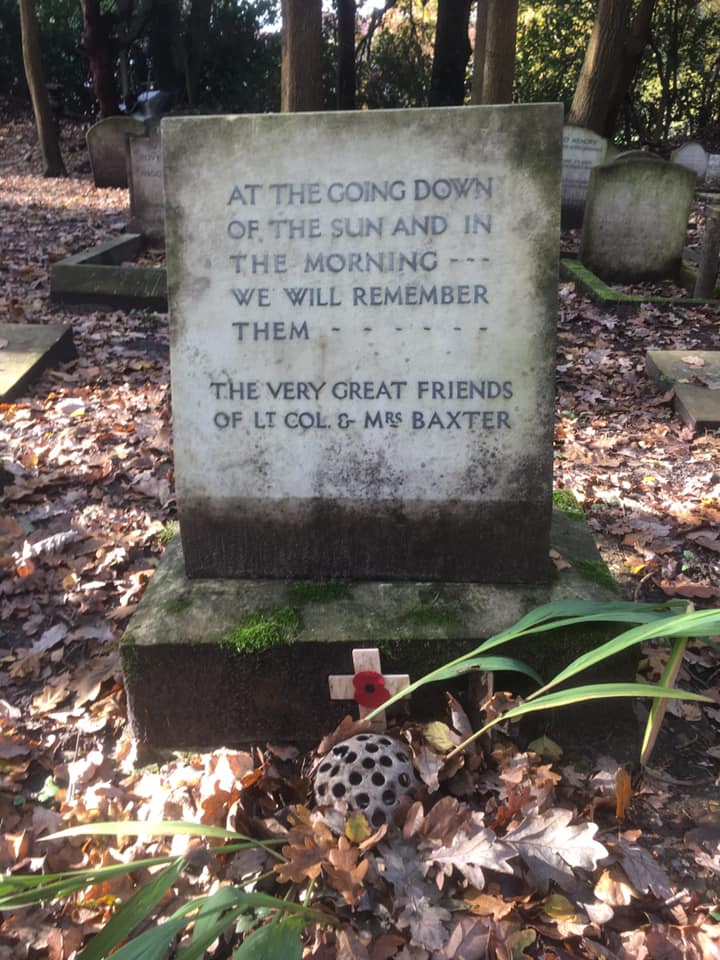 Tommy Cooper has since passed away, but the group is still working on the upkeep of the cemetery. It may never return to its former glory, but it can be preserved, as the owners of the pets buried there wished to preserve their memory by setting their names in stone.

Their deeds may not be in any books like Moffat Treasure’s, but to their owners they were still heroes – and, indeed, Great Friends.