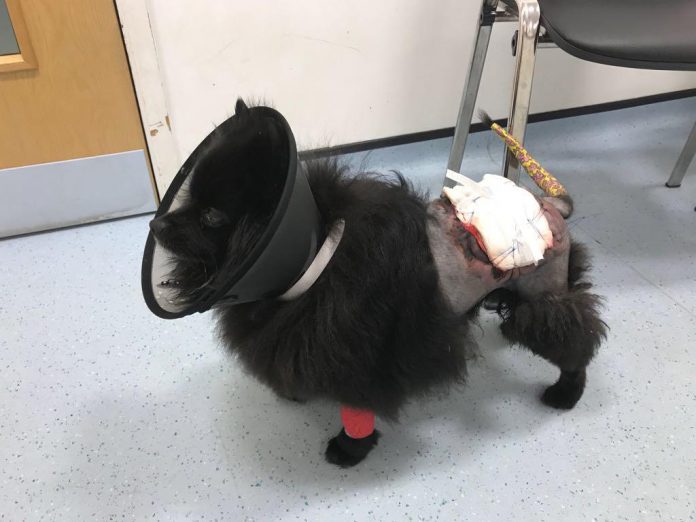 Bonna the Pomeranian was six years old when she suffered a vicious dog attack that left her with serious injuries, in pain, and without her old zest for life.

After going through several surgeries to save her life, Bonna was still clearly in pain, timid and depressed a year later – to the point her owner Hara questioned whether putting her through veterinary treatment had been the right thing.

The treatment aims to “correct alignment issues and balance the animal’s musculoskeletal system, restoring health and movement, soundness, and performance”. 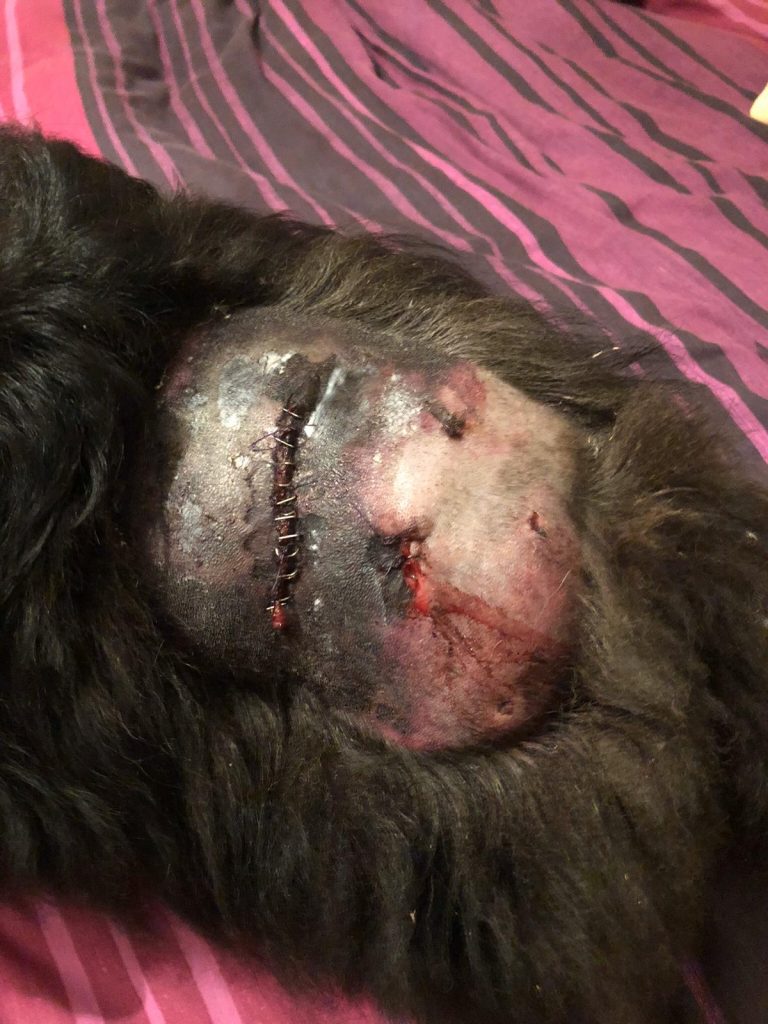 A statement by the McTimoney Animal Association (MAA) says, “The injuries Bonna had sustained left her struggling with her mobility, very stiff in her hind limb movement and often reluctant to run around for longer than 5 or 10 minutes at a time not only making walks a challenge but hugely impacting Bonna’s enjoyment of life.

“Understandably Hara and her family found this upsetting to see.

“Having suffered such an attack and the surgeries that were subsequently necessary, Bonna’s body had to adapt to cope with changing movement patterns and so Emma knew that stiffness is not unusual in these cases.

“Emma noted that on examination Bonna had a lot of skeletal imbalance including a significant curve through her spine and pelvis probably from the attack which had not been addressed by the subsequent surgeries. It is these compensatory imbalances in the spine and pelvis which the McTimoney treatment is so effective at correcting.”

Bonna had large amounts of scar tissue that went deep into the musculature of the hind quarters and lower back. The injured areas where the surgery had taken place were “clearly marked by patchy, dry dull coat and tight scaly skin”. 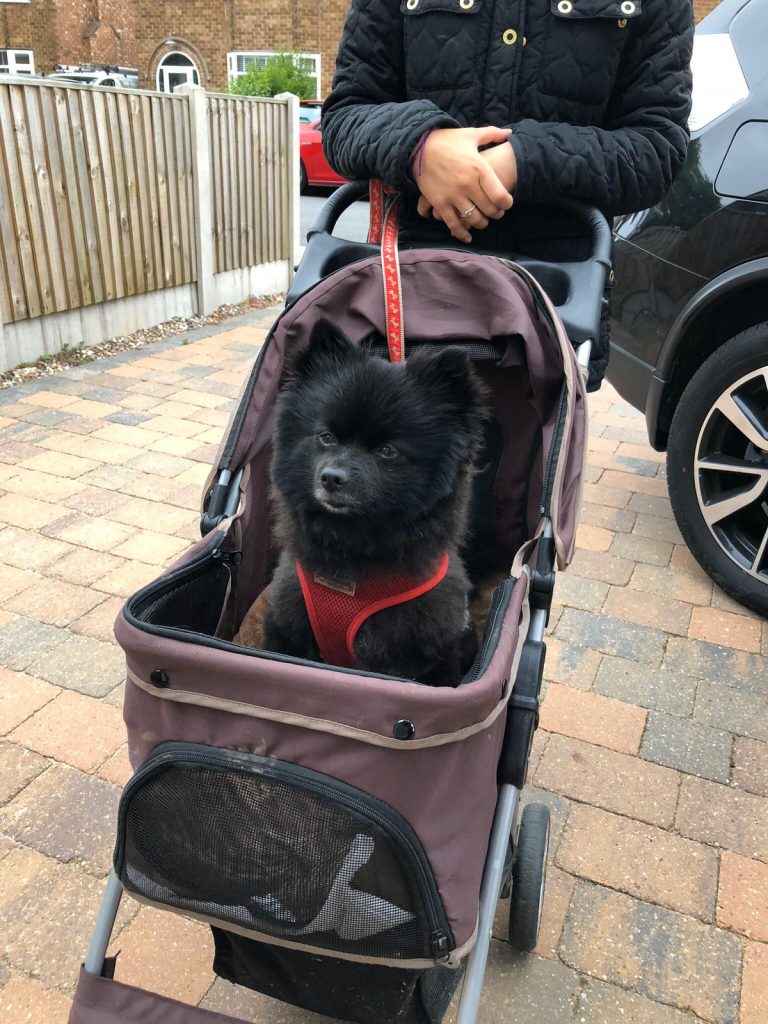 Emma said, “From my years of experience as a McTimoney practitioner this was one of the worst cases I’d seen of skeletal crookedness, lack of mobility in the lower back and amount of scar tissue.

“I worked with Bonna and Hara over a number of months using chiropractic and massage techniques as well as laser therapy. Hara was a dedicated owner doing all the homework I asked of her to help strengthen Bonna.

“Initially progress was slow, the scar tissue was starting to soften and break down allowing more mobility and Bonna’s spine was getting more mobile and straighter. However, Bonna was lacking confidence to go for walks and meet other dogs.”

The decision was taken to give Bonna the option of a dog pram so that the tiny Pomeranian could rest between bouts of exercise and spend more time outside, building confidence that she was not about to be attacked again.

Six months later, the little Pomeranian is very much back to her old self, no longer needing the pram and running around the park as though nothing ever happened. 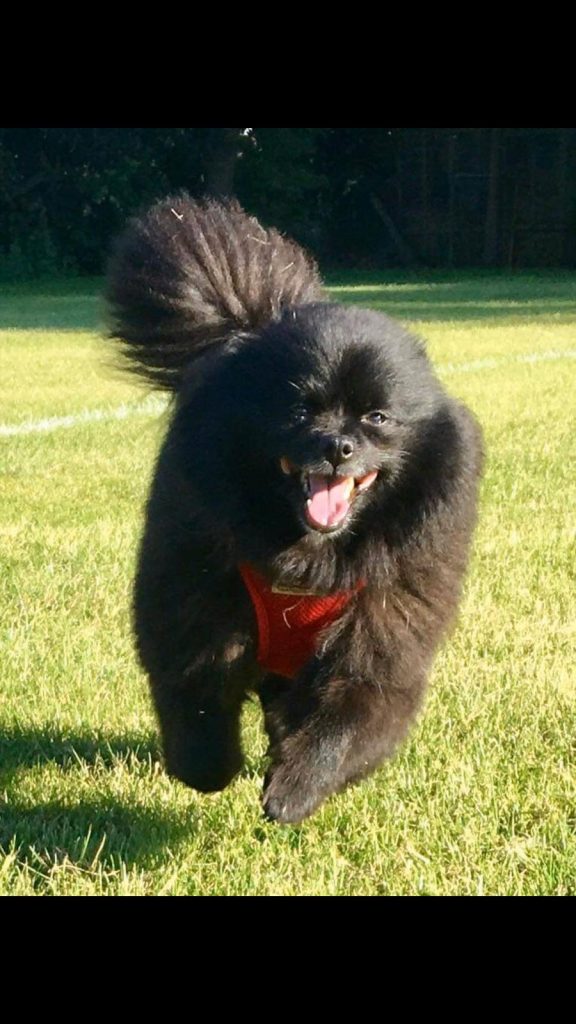 Emma is “delighted” with the outcome.

“The pram was a key factor in Bonna’s amazing recovery, and no-one should discount the use of this device as part of a rehabilitation programme,” she says. “Despite her horrific injuries, having a correct holistic plan including McTimoney physical therapy, exercise, diet, and supplements, can significantly improve quality of life and in Bonna’s case restore her to the happy go lucky girl she used to be.

“Bonna’s story just goes to show that as an owner you can help your dog in so many ways and with dedication and TLC anything is possible.”