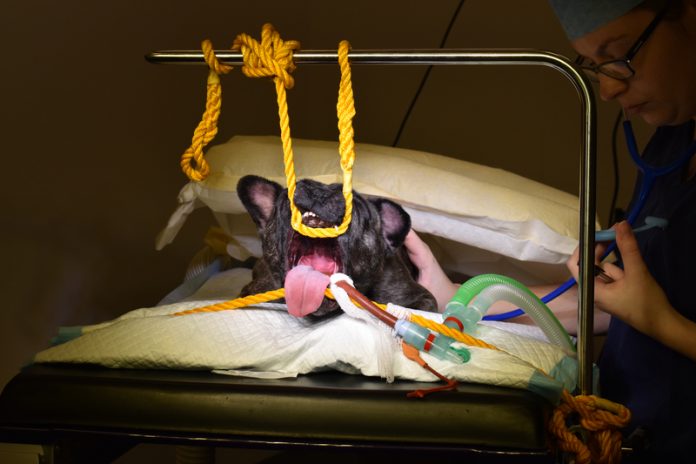 Beauty comes at a breathtaking price for popular flat-faced breeds, as staggering statistics reveal that Battersea Dogs and Cats Home are performing more surgeries than ever before to help dogs with Brachycephalic Obstructive Airway Syndrome (BOAS).

Brachycephalic breeds, such as Pugs and French Bulldogs, have been hugely popular amongst celebrities and the public in the past few years. The obsession with ‘cute’ pets with abnormal features has meant that looks have been widely chosen over health. To achieve the adored flat-faced look, dogs are bred to have short, obstructed airways and often need major or even lifesaving surgery just to be able to breathe. This hugely impacts the lives of the dogs, preventing them from doing simple activities such as running or playing.

Snorting and laboured breathing is common for dogs in need of this surgery and many owners mistakingly assume this is normal. It happens all too often to find videos showing these dogs snorting and struggling, while unaware owners film them thinking it ‘cute’. Many of the people who view and comment the videos are none the wiser.

Many French Bulldogs and Pugs now have airways that are so narrow, it would be the equivalent of us breathing through a drinking straw

New statistics released today (30 January) show that in 2018, Battersea Dogs and Cats Home performed BOAS surgery more than ever before in their 159-year history. In 2015, just seven BOAS surgeries were performed; three years later, the world-famous shelter had to perform the operation 62 times.

The surgery is no miracle cure however, as even after the procedure many of these dogs will only be able to have limited exercise. Battersea’s Head Vet, Shaun Opperman, said, “While breeds like Pugs and French Bulldogs are undoubtedly cute, they’re also a classic example of irresponsible, selective breeding. Over the years, breeders have chosen the flattest-faced dogs in the litter to breed, and this has created traits that are dangerous and damaging to the dog’s health.

“Many French Bulldogs and Pugs now have airways that are so narrow, it would be the equivalent of us breathing through a drinking straw. The corrective surgery massively improves their quality of life, but it’s a risky, invasive operation and recovery can be very complicated.”

Shaun Opperman continues, “The dogs Battersea takes in really holds a mirror up to society and reflects what breeds are the most popular in that moment. Sadly, that mirror also shows the ugly side of dog ownership, and- for these dogs- looks literally can kill. The rising number of Brachycephalic dogs is one of the biggest welfare issues that Battersea is facing right now, which is heart-breaking to see.” In 2018 there was a general increase in brachycephalic dog breeds coming through Battersea’s  gates – possibly due to owners not realising the medical strain that comes with a flat-faced dog before getting one. Battersea took in 47 Pugs, compared to 38 the previous year and 36 in 2014. The most impressive leap was that of French Bulldogs, whose popularity skyrocketed in recent years: 40 were taken into Battersea last year, compared to just eight in 2014.