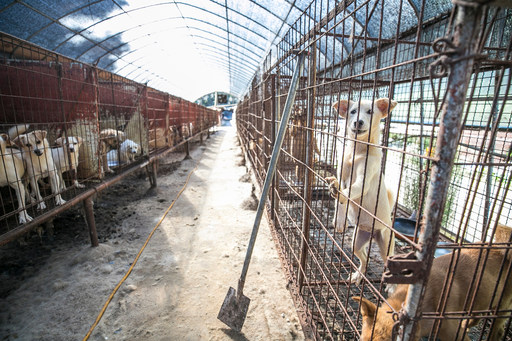 Humane Society International (HSI) has so far permanently closed twelve dog meat farms and saved nearly 1,400 dogs from being killed and eaten, with 55 of them rescued from a farm just 12 miles outside of Seoul. Animal lover and music mogul Simon Cowell has given a great amount of support to the charity as they look to close down another dog meat farm, rescuing more than 200 dogs and puppies.

Thousands of dog factory farms still exist in South Korea, breeding around 2.5 million dogs a year for human consumption. However, the popularity of eating the meat is quickly declining, especially amongst younger consumers.

To encourage the Korean Government to adopt the phase-out plan of the dog meat industry, HSI also works with dog meat farmers who want to leave the dying industry, and helps them switch to more humane alternative livelihoods such as mushroom or chilli growing.

This isn’t the first time Simon Cowell has supported HSI’s #EndDogMeat campaign. Last year he gave an exclusive interview to Good Morning Britain on the eve of HSI’s rescue team setting off for Seoul on another rescue mission. He was incredibly moved by the plight of dogs suffering on the farms, and pledged to help directly to bring more dogs to safety. Simon told GMB’s Pip Tomson, “It’s like eating your friend. It’s the fact you’re eating such a kind, helpless, sweet animal.”

Simon’s sentiments are increasingly echoed by campaigners in South Korea who are strongly opposing killing dogs for meat. In July, a petition on the government’s website calling for an end to the trade was signed by more than 200,000 people and prompted an official response from the President’s office. The government pledged to consider removing dogs from the legal definition of livestock, a move that could make a significant dent in the brutal industry.

HSI UK Executive Director Claire Bass says, “Simon’s generous donation means the world to us, and provides a huge boost to our appeal to close this horrendous dog meat farm.

“More than 200 dogs are languishing in the most appalling conditions, but we have a real chance to save them. With every dog farm we close and every farmer we help switch to a more profitable, humane business, we’re showing the South Korean government that it’s possible to end this cruel trade.

“These poor dogs have had the worst lives so far, so we’re desperate to get them out of those dreadful cages and show them love, soft beds and loving arms for the first time in their lives.”