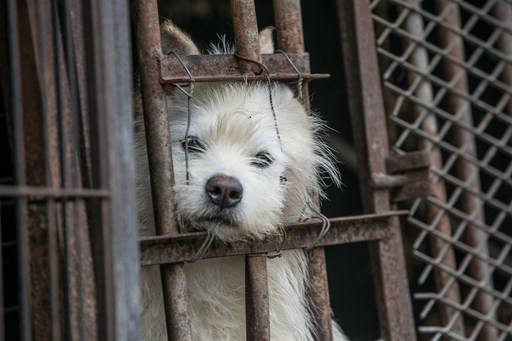 Animal protection campaigners in Seoul handed in a petition signed by nearly 1 million people from South Korea and around the world, calling on President Moon Jae-In to end the dog meat industry. The submission coincides with the end of Bok Nal, the hottest days of summer when the highest numbers of dogs are killed and consumed per the myth that the meat “combats the heat”.

Humane Society International/Korea, Korea Animal Rights Advocates (KARA), and petition site Care2 hand-delivered the petition to the President’s residence, the Blue House, with a letter urging him to initiate a phase-out of the estimated 17,000 dog meat farms across the country, in which an estimated 2.5 million dogs are reared for human consumption. On August 10 the government agreed to remove dogs and cats from the legal definition of livestock, but HSI and KARA now want to see a time-tabled plan of action. Nara Kim, dog meat campaign manager for HSI/Korea, says, “Our petition of nearly 1 million signatures reflects the desire of compassionate citizens here in South Korea and around the world to see an end to the brutally cruel dog meat industry. We hope that President Moon will agree that the time is right for South Korea to end this industry that causes so much animal suffering and is increasingly rejected by Korean citizens. We want South Korea to join the growing number of countries and territories across Asia that have consigned the dog meat trade to the history books.” The petition hand-in comes as HSI/Korea releases new heart-breaking footage showing rows of live dogs kept in cages outside dog meat shops and restaurants at Gupo market in Busan. Some of the dogs can be seen still wearing collars, a sign that they may have been former pets. The dogs huddle together in the barren cage, waiting for their turn to be selected for slaughter. Their usual fate is to be taken to the back of the shop to be electrocuted. Butchered dog meat is also shown on display in cold cabinets, some with an unmistakable dog paw still attached, the remains of their cage mates. Nara Kim says, “It makes me so sad to see these poor dogs displayed at Gupo market. They will have already endured such miserable lives, only to end up here waiting to die. Local campaigners have had some success working with local authorities to tackle dog meat slaughter at Moran Market in Seoul, but during Bok Nal as many as 1 million dogs could still be killed to supply the dog meat restaurants and markets like Gupo and Chilsung.” “Our video shows the common scenario of only the Jindo and Tosa breeds being put on public display, perpetuating the myth that only breeds considered ‘meat dogs’ are killed. The truth is, all breeds including Chihuahuas, Labradors, beagles, huskies and poodles are routinely found on dog meat farms, I have seen it with my own eyes. We suspect that these other breeds are slaughtered out of sight so as not to upset the Korea public. Jindos and Tosas are my personal favourite dogs, they are so sweet and misunderstood, but if the public realised that they are eating these pet breeds too, they would be horrified.”

South Korea is the only country in Asia known to intensively farm dogs for meat. They suffer immensely both physically and mentally, spending their entire lives in small, barren, wire cages without proper food, water, stimulation, comfort or veterinary care. The majority of dogs are sold and slaughtered at around 1 year of age, usually by electrocution. A growing number of South Koreans oppose the cruelty of the dog meat industry, and many dog meat farmers are keen to leave what they consider to be a dying industry. Campaigners want the government to take the lead in dismantling the dog meat trade once and for all.

KARA’s director, Jin-kyung Jeon, says, “KARA and HSI/Korea have been doing a joint campaign to break down the prejudice against ‘meat dogs’ and it seems that Korea is in the middle of change. We welcome the recent announcement by the Blue House saying that the current law defining dogs as livestock is out of date and the Livestock Industry Act will be modified to remove dogs. Officials said the current law could give the wrong impression that the government approves of breeding dogs for human consumption. This is a huge step forward since the current law has given legitimacy to dog farms in Korea.

“The dog meat industry has been growing for over 40 years without any proper enforcement against violation of the law. Today we are calling for a government action plan to end the dog meat industry. This call is timely as revised legislative bills, which could effectively control the dog meat industry, were recently proposed to the National Assembly. We are making all our efforts in every direction to stop animal cruelty. “

The dog meat trade has already been outlawed in Hong Kong, Taiwan, the Philippines, Thailand and Singapore and most recently the government of Indonesia pledged to ban the trade. HSI/Korea, KARA and Care2 believe it’s time for South Korea to do the same.

Images by Jean Chung for HSI