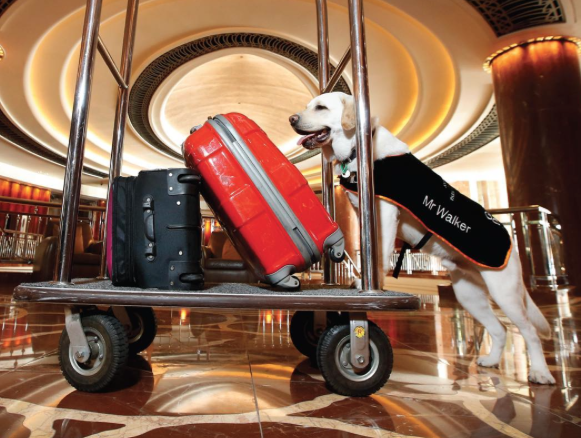 Mr Walker will see to your bags; he’s the new special concierge at the Park Hyatt Melbourne, a luxury five-star hotel in Australia.

Mr Walker is a yellow Labrador, and his full title is actually ‘Canine Ambassador and Resident Hotel Dog’. His duties include greeting the hotel’s guests and taking them for morning walks, and perhaps a spot of yoga. The rest of his day likely is spent lounging on his custom-made Tasmanian Oak bed.

Mr Walker is also raising awareness of the work of Guide Dogs Victoria, the charitable organisation that trained him up as an assistance dog, before realising his larger-than-life personality was suited to a different role.

“It’s a great privilege to work with such a well-regarded partner like the esteemed Park Hyatt to share the great work that Guide Dogs do within our community,” Guide Dogs Victoria CEO Karen Hayes told the Herald Sun.

“We’ve already heard some great feedback from the team at Park Hyatt that guests who have booked in for later this year are requesting to join Mr Walker on a stroll through the park.

“He will also play an important role in raising awareness about the role Guide Dogs play in the lives of those with blindness or low vision, but also in raising funds for us to breed, raise and train more life changing dogs.”