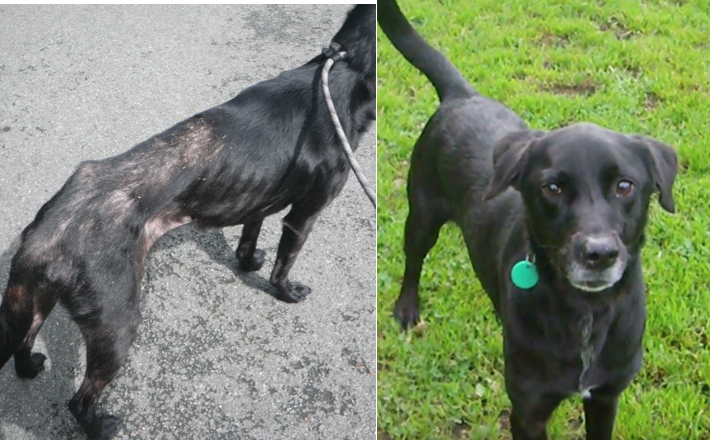 A Labrador-cross named Coco has been given a new lease of life after she was saved from an owner who starved and neglected her.

Coco’s owner, Clare Hobson, was sentenced today, Wednesday 11 October, after pleading guilty to three Animal Welfare Act offences at a previous hearing. She has been banned from keeping animals for life, and was also given a 12-month community order, told to do 120 hours of unpaid work, and has to pay costs of £500.

Coco was visited by the RSPCA in April this year, following concerned calls from members of the public. She was so thin that her ribs, hips and spine jutted from her body, and an untreated skin allergy had ravaged her coat.

Today, following months of regular meals and lots of love, Coco has been transformed.

RSPCA inspector Heather Morris said, “Coco was such a sorry sight and she was in a poor condition. When we took her away, she was so quiet. She was clearly a very poorly dog and she looked really down.

“Coco really is a totally different dog today. It is hard to believe that she is the same dog who I took into our care earlier this year. Back then she was so quiet and clearly suffering, but now she is so playful and happy. It goes to show what difference love and care makes towards a dog.”

Coco has now been signed over to the RSPCA, and will be looking for her new home very soon.