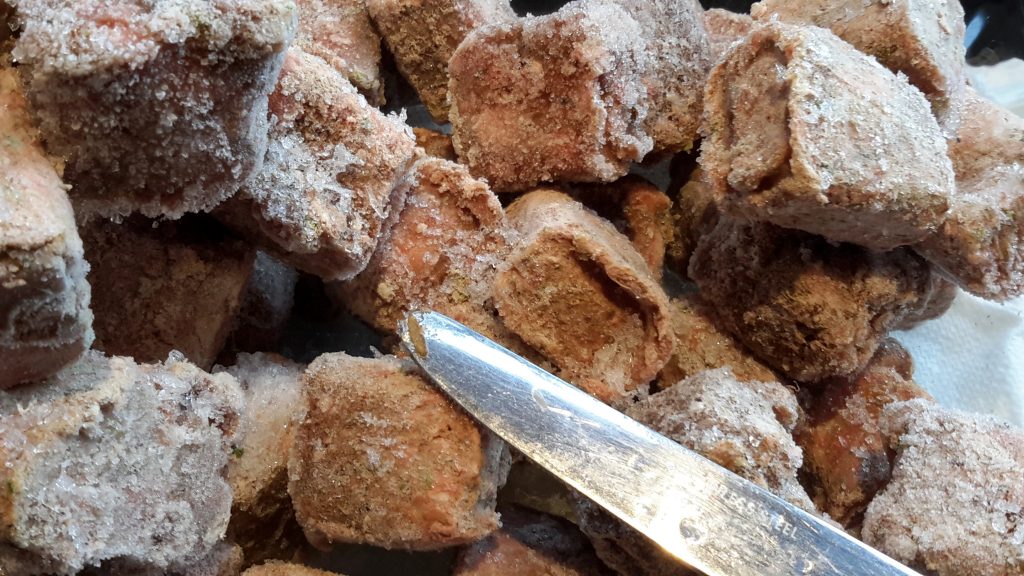 Raw food manufacturer Natures Menu has issued a warning to owners after a customer reported finding rice in one of their grain free products.

Paul White became concerned after his German Shepherd Tiegan, who suffers from multiple severe food allergies, became ill after eating food from their grain free Country Hunter range. After checking the product, Paul found what looks to be grains of brown rice and contacted Natures Menu.

A letter sent to Paul regarding his complaint stated that the issue may have occurred “due to the product being made post product containing rice” and that despite the line being cleaned following a change of product, “something may have been missed.”

As a result, from 4 August, Natures Menu has implemented the following actions:

Natures Menu have added that it will take some time for their new production runs to work through their system, a process which may take between four to six weeks.

However, worried that other owners with dogs that have a rice allergy may have purchased the grain free product, Paul believes Natures Menu have not done enough to inform customers of this potential issue.

Paul White contacted Dogs Today to say, “They accept there have been production problems and new procedures are now in place, and then state the new procedures would take four to six weeks to work through the system. I rang the day I received this letter with disbelief that they were happy to allow contaminated food to be sold. I was informed that because I was the only person who had reported it this was not serious enough to warrant any further action.” Natures Menu have since issued a statement:

“Following feedback from one customer on 4th August, we have investigated whether two variants of product with limited batch numbers could contain grain when advertised as a ‘grain-free’ product. Our review to date has found no evidence of this but as a duty of care we are awaiting the return of the remaining product from the customer to complete our review fully.

“As a precaution, we have also asked any customers with grain intolerant dogs to check the batch numbers for Country Hunter Wild Venison Nuggets (31/08/2018 and 20/10/2018) and Country Hunter Succulent Duck Nuggets (25/08/2018) before feeding.

“We sincerely apologise for any inconvenience caused. Our customer care team are on hand on 0800 0183770 should any customers wish to discuss this matter further.”

Claire Watson, who reported a similar issue earlier in the year, contacted Paul after reading his complaint. She says, “I was feeding my dog on the Natures Menu country hunter range venison blocks, which for several months, prior to finding the rice was working really well for my dog as she has food allergies.

“Out of the blue she had skin reactions and an ear infection which are the normal signs that she has eaten something she is allergic to. I was mashing the venison blocks one day and saw what I thought was a shard of bone but on closer inspection discovered it was part of a grain of rice, after mashing several more blocks I discovered more rice grains and realised this is what had been causing the reaction.

“I thought I would try them again and surely the issue of the rice would have been resolved but no, several bags with different batch dates and all of them containing rice and small pieces of blue plastic packaging.

“I am disgusted to hear this is still happening and would not be using any if their products again.”

Paul adds that he hasn’t returned the product for testing as he is seeking to have an independent test to check for rice and cross contamination of other non listed ingredients.

Tiegan is currently recovering after her illness. Paul adds, “She had to be put under because she had so much pain in her tail. Luckily the antibiotics are working now and she’s on the mend, doing her lion impression.”