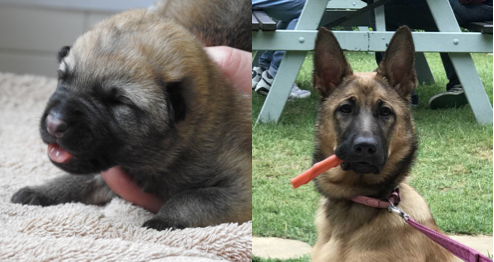 In February we reported on the case of Doris, named after the storm in which she was found. At only a few days old, she had been left by some bins in Tamworth, Surrey, to fend for herself while the country was in the grip of severe gales.

Doris was rescued in time to save her, and staff at the RSPCA’s Millbrook centre began the long process of hand-rearing the tiny puppy.

Now, six months later, we can share a special update. Doris went from strength to strength, transforming into a beautiful and bouncy young dog – making those round-the-clock bottle-feeds totally worth it. As Doris was so young when she was found, and there was no indication of where she may have come from, it was a real surprise when she slowly appeared to be a German Shepherd!

Jack said, “It really was love at first sight when we saw Doris. We just knew she was the one for us. We saw her bounding around the centre and we knew we just had to take her home.

“It is amazing she survived. She is such an intelligent dog and we completely adore her. Everyone that meets her falls for her. She even has her own Instagram account now with over 700 followers!

“She just loves life and she is so intelligent. Her favourite thing is swimming – you can’t keep her out of the water! She is a real foodie too – she loves her food.

“She is such a friendly lovable girl. I’m a postman – and she loves jumping in my van with me, she is the only dog I know that doesn’t bark at the postman!”