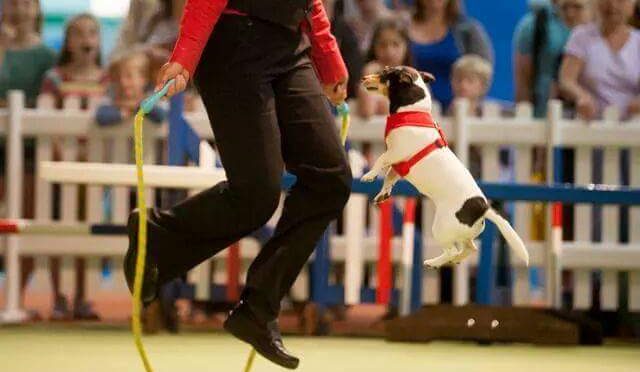 A rather gifted little Jack Russell from Lewdown in Dorset has earned a place in the Guinness Book of World Records with her owner, Rachael Grylls. The pair used a skipping rope to complete 59 jumps together in one minute, subsequently smashing the previous record by a full 14 jumps!

Eight-year-old Jessica is no ordinary little terrier. Having been crowned Britain’s Most Talented Pet not once, but twice, she’s become well accustomed to showing off her athletic prowess and astounding levels of discipline.

Four independent witnesses were present to qualify the duo’s record attempt, with the two of them permitted the odd break in play to catch their breath!

“We actually did 63 skips in total but one skip was taken off for each time we stopped” explained Rachel to local newspaper Okehampton Today.

“The original amount of skips to beat was 45 but recently a Japanese man and his dog raised the record to 50, so the pressure was really on. But we did it!”

Rachael and Jessica travel the length and breadth of the country giving obedience training seminars, presenting demonstrations and displays at several events throughout the year. Speaking to Dogs Today Rachael said, “I’ve had Jessica since she was eight weeks old and I started trick training her when she was about 12 months old. It wasn’t long after I started training her that I noticed her ability to jump – it was like she had springs in her little legs!

“Jessica very soon learnt how to skip with a rope and since then we have been on several television programmes and performed at shows and charity events wowing the crowds with her skipping and other unique tricks such as barrel rolling, skateboarding, driving her car and many more.”

Rachael, a horse rider, had originally thought up the idea for her skipping trick after Jessica managed to jump onto her back and then, after a few attempts, onto the horse itself!

She told Dogs Today about what motivated her to accept the challenge.

“It was a television presenter that suggested that I attempted the World Record as he was convinced that Jessica would be able to achieve it. Leading up to the attempt I got Jessica fit by skipping with her most days.

“On a cold dark December evening with qualified witnesses and timekeepers we took on the challenge. I submitted my evidence to Guinness and twelve weeks later they got back to me and confirmed that Jessica and I were the new World Record Holders!”

Jessica can be seen demonstrating her skipping and other amazing tricks next month at The National Pet Show at the Excel Centre in London on the 6 – 7 May.