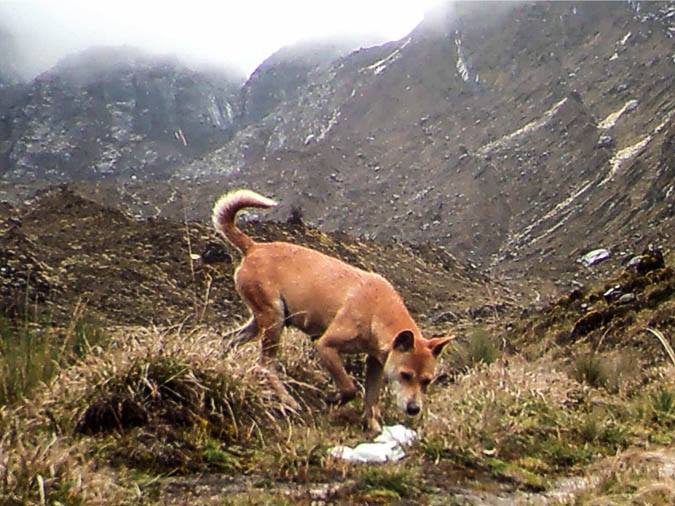 In an astonishing series of events, a rare species of canine thought to have gone extinct has been rediscovered in the mountainous regions of New Guinea. The New Guinea highland wild dog (HWD) has not been seen in its native habitat for more than half a century, although a recent expedition has found the species not just alive but positively thriving, in one of the earth’s most remote locations.

After a number of researchers with the New Guinea Highland Wild Dog Foundation (NGHWDF) were sent deep into the country’s dramatic mountain range, they came across evidence of a healthy, viable population of the species whilst traversing the mountainous spine that splits the east and west of the country. Having spotted a series of canine paw-prints, the researchers – led by zoologist James K McIntyre – quickly launched an assessment survey of the area using trail cameras and bait. It would only take a few days for the team to capture ‘definitive proof’ of the rarest and most ancient canine in the world.

The evidence collected by the research group shows the presence of “at least 15 wild individuals, including males, females and pups, thriving in isolation and far from human contact” wrote Science Alert. Similar in appearance to both the New Guinea Singing Dog and the Australian Dingo, scientists have been unable to confirm the existence of the rediscovered breed for more than 50 years. The only prior evidence of their survival came in the form of two unconfirmed photos from 2005 and 2012. However, this most recent discovery puts to bed any previous questions surrounding their presence in native New Guinea.

“The 2016 expedition was able to locate, observe, gather documentation and biological samples, and confirm through DNA testing that at least some specimens still exist and thrive in the highlands of New Guinea.

“The discovery and confirmation of the highland wild dog for the first time in over half a century is not only exciting, but an incredible opportunity for science” said the research group responsible for making the breakthrough.

Of course, the breeds dwindling numbers made it even harder to identify them, although you’d find it difficult to find a more attractive canine with their golden, black and tan or cream coloured coats and ‘fish-hook’ shaped tails, much like a Shiba Inu.

The most exciting element to the highland wild dog’s rediscovery is how it’s existence represents what the foundation have called ‘the missing link’ between ancient dog species and contemporary domestic breeds. This became apparent when the DNA analysis of the breed revealed them to be the “rarest and most ancient canine currently living” and therefore the “best example of a proto-canid” or a “truly living fossil” wrote the NGHWDF.

The DNA analysis of these animals should hopefully give us a better understanding of canid evolution, as the foundation confirms saying, “The fossil record indicates the species established itself on the island at least 6,000 years ago, believed to have arrived with human migrants. However, new evidence suggests they may have migrated independently of humans.

“While the taxonomy and phylogenetic relationships with related breeds and Australian dingoes is currently controversial and under review for both New Guinea singing dogs and highland wild dogs, the scientific and historical importance of the highland wild dog remains critical to understanding canid evolution, canid and human co-evolution and migrations, and human ecology and settlement derived from the study of canids and canid evolution.”

The foundation, who having made contact with the dogs are now planning on further studies of the breed in order to assist with conservation efforts, to ensure they do not go unnoticed for another half a century.