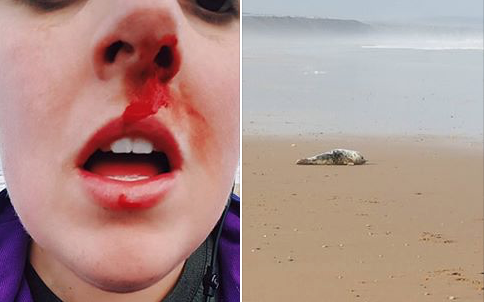 A County Durham dog walker is recovering after she was punched in the face while trying to stop a group of teenagers from attacking a seal.

Sarah Tough was left with a bloody nose after the incident on Monday on Crimson Beach, where she had been out with her Border Collie Tally. Her pictures have been shared thousands of times on social media in commendation of her bravery.

She wrote in a Facebook post, “….him and his pals were torturing a baby seal on Crimdon Beach, rolling him around and burying it in the sand.”

After she threatened to call the police, Sarah was set upon by one of the group. Thankfully her trusty dog leapt to her defence, and bit the attacker on the ankle. The group then fled.

The RSPCA arrived to help the seal, which was exhausted but unhurt, and it returned to the sea. The charity has issued a warning that seals should never be touched by members of the public.