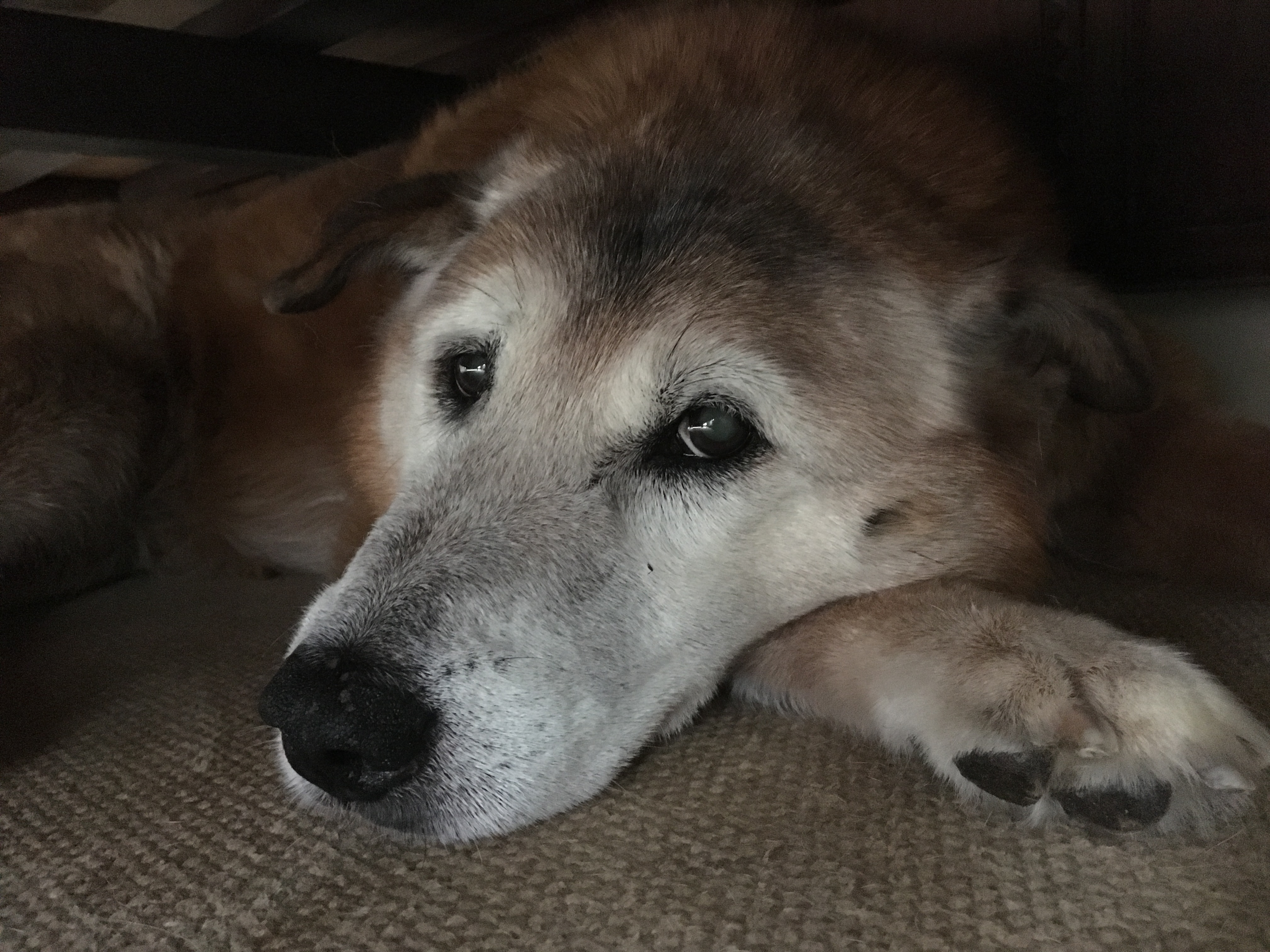 I was sitting on a bench at a playground watching my son play, as my dog Sally sniffed the bushes nearby. A gentle, rather distinguished German Shepherd mix ‘of a certain age’, she was, as usual, followed by a trail of children.

One boy broke away from the group to come speak to me.

“What’s that thing on your dog’s arm?” he asked.

“Her elbow?” I answered.

That’s how it began.

Within a matter of a few days, the vet confirmed what I feared: sweet Sally has a malignant tumor, now the size of a tennis ball, on her right forearm. The tumor is growing so rapidly that neither the vet nor I had noticed it at her check-up just a few weeks prior. The news is forcing me to consider questions I have never before faced. And boy howdy, they are tough.

First, let’s dispense with euphemisms. I’ve always found hearing that a pet was ‘put to sleep’ a verbal toe-stub: the pet isn’t going to wake up. Similarly, ‘put down’ strikes me as too dismissive for the gravity of the situation. ‘Put down’ is what I do with an empty coffee cup. For me, considering whether to end Sally’s life mandates clear thinking: I am preparing myself for a day when I might choose to have her killed. (Hang on a moment, I have to stop typing to sob.)

A rescue dog, Sally was already two or three when we got her, 12 years ago. For reasons I’ll never know, she chose me as her pack leader, following me from room to room, refusing to walk with anyone else if I am anywhere on the premises. I take her everywhere I can, even to work; suffice to say she and I are pretty close. She’s the first dog I’ve ever had, and she has certainly schooled me in the meanings of loyalty and unconditional love.

A life-and-death decision, as I carefully monitor her quality of life

The vet told me that the tumor is too big to be removed. We can do further testing, she said, to find out exactly what kind of cancer it is, to where it has metastasised – it’s so fast-growing that she says it’s safe to assume it has already started to spread – and that my options could include chemotherapy, radiation, and/or amputating her front leg, at the chest.

After multiple discussions with the vet, with my children and with my God, I’ve decided not to put her through more testing, nor to take any extreme measures. She’s on anti-cancer medication and painkillers, but I’m going to stop there. While I understand completely people who feel otherwise, I am simply not going to force her to ‘fight’ a cancer battle that she couldn’t possibly comprehend.

So what does that mean, for me? It means that, armed with only the confirmed knowledge that Sally has more than weeks (but fewer than years) ahead of her, I will probably have a decision on the horizon. A life-and-death decision, as I carefully monitor her quality of life. If that tumor grows at the speed at which it started, she could find herself unable to walk. Or if it spreads, she could find herself with a host of other ailments.

Watching her slight limp, I can already see that there that the moment may well arrive when ending her life would be a kindness

I am afraid of the suffering that might lie ahead. I am heartsick at realizing she might soon be unable to climb the stairs to sleep under my bed, as she always has. I am distraught imagining her struggling to walk through our beloved woods.

Beyond than that, I am staggered by the weight of holding her fate in my hands, overwhelmed by the terrible power over her life and death. Watching her slight limp, I can already see that there that the moment may well arrive when ending her life would be a kindness. But my imagining the future stops cold at the notion of driving her to the vet’s, having her put her head in my lap, and stroking her head, while she dies, at my behest.

I can’t see myself doing that to her.

I can’t see myself failing to do that, for her.

For years, I’ve been grateful at the depth of the life-lessons I have learned, as her owner. I am humbled that she may teach me one more deep lesson, on the true meaning of love.