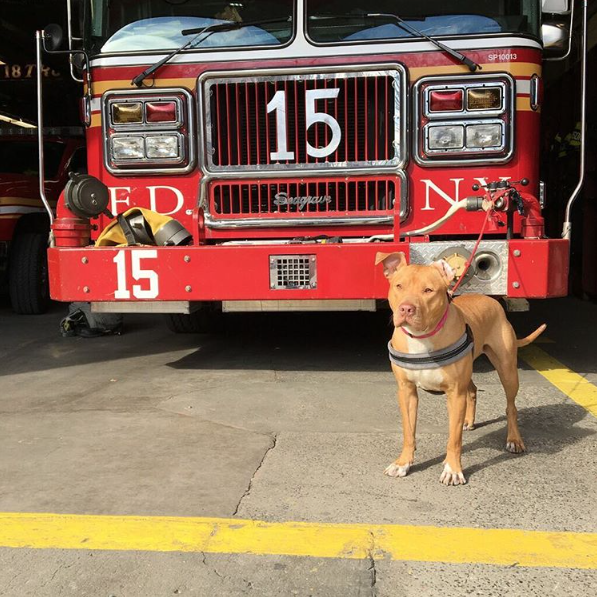 Malnourished, scarred from cigarette burns, and alone in a disused house in New York in the middle of January, Ashley was one unfortunate dog. She had no food and no water, and, it seemed, not a friend in the world. Luckily, help was on the way. The young Pit Bull female was picked up by some wonderful people from No More Pain Rescue following a tip-off, even though they didn’t have anywhere for her to stay.

“We didn’t ask any questions when the person called us and told us the dog was alone,” Erica Mahnken, one of Ashley’s rescuers, told CBS News. “It was freezing out. There was nothing in the house. No, we didn’t think about it — we just ran and got her and said we’ll figure out what we were going to do after we got her out of there.”

In a bind, Ashley’s rescuers called up some firefighter friends of theirs, knowing that the fire station had just lost its resident Rottweiler. And so Ashley joined the brigade on the Lower East Side station aptly named ‘Fort Pitt’ until other arrangements could be made.

But three days later, a call was made, and Ashley was staying for good. She’s now the new fire house dog, and is only a few weeks into her new role. She loves to hang out with all the crew and is cuddled all the time. Best of all, Ashley’s past is being forgotten, and she has already doubled in weight.