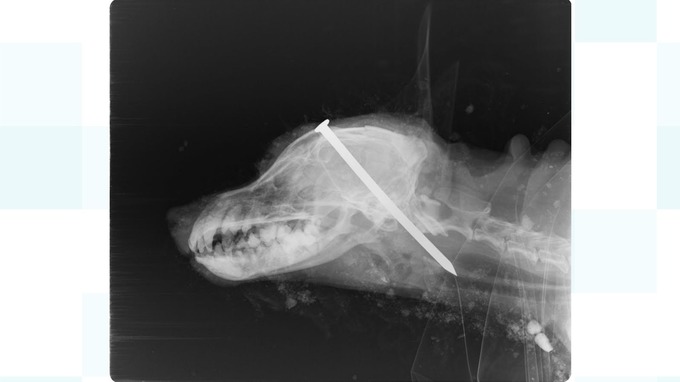 Two men aged 59 and 60 have plead guilty to animal cruelty offences after they attempted to kill a dog and then buried him alive, in what the RSPCA has called an act of ‘inexplicable cruelty’. The little dog, thought to be a terrier-cross named ‘Scamp’, was discovered by a horrified couple, who were out walking in Kirkleatham Woods in Redcar, Cleveland, in October last year.

Upon hearing a faint whimpering nearby, the couple were led to a small mound of earth, under which they found a dog – somehow still alive – with a nail protruding outwards from between his eyes. Having immediately called the police, they then rushed the poor animal to the vets where – considering his horrific injuries – he was put to sleep to avoid any further suffering.

RSPCA inspector Nick Jones had the following to say on the incident,

“In all my ten years working for the RSPCA, I have never known anything so horrifying and inexplicably cruel.

“This is clearly a very deliberate act of cruelty and it’s inconceivable to think why somebody has done it to this poor little dog. It’s likely more than one person was involved in this act of horrific cruelty due to the force needed to inflict such an attack.”

The men will be sentenced in March, although under current legislation, the maximum sentence they could face is only six months in prison.

MP for Redcar Anna Turley, has recently been raising the issue of animal welfare in parliament. She called the incident an ‘abhorrent act of cruelty’ going on to say, “That someone would even consider, let alone inflict, such brutality on a defenceless animal is beyond belief. I hope the perpetrators of this crime are caught and receive the punishment they deserve.

“We saw with the case of Baby the bulldog and the horrific treatment of her by the Frankish brothers that the sentencing for animal cruelty cases does not reflect the severity of the crime.”

In this case, Andrew and Daniel Frankish were sentenced in March of last year to a mere 21 weeks in prison, despite the atrocities they committed against their pet bulldog. In a filmed attack, Baby was thrown down stairs, head-butted and stamped on. She died three months later, after losing the use of her legs.

Anna Turley had initially secured a Private Members Bill in July of last year to discuss punishment severity for those who commit animal cruelty. The debate’s second reading is scheduled for today.

The two individuals involved in this act of horrific cruelty have been named as Michael Heathcock and Richard Finch. They were arrested on Friday 21st October before being questioned by RSPCA officials. Both Heathcock and Finch were sentenced to four months in prison and received a lifetime disqualification from owning animals. They were also ordered to each pay a £100 costs and a £115 victim surcharge.

Heathcock had initially told Teesside Magistrates court that he couldn’t afford to pay the veterinary fees to remove an untreated brain tumour from ‘Scamp’ and had therefore taken the decision into his own hands.

RSPCA inspector Jones had the following to say, “Scamp had been suffering for months but instead of seek veterinary treatment his owner and his owner’s friend decided to take him to a secluded spot in the woods and hammered a nail into his head.

“There were four indentations in his skull, where they had attempted to hammer the nail in and failed. Scamp had also suffered a burst skull fracture from a large trauma ‘such as a hammer’.

“It is very hard to think about what he went through. It’s been a truly harrowing case for everyone involved.

“The only consolation is that Scamp’s final moments were spent being comforted by the kind strangers who found him, and the wonderful staff at the vets.”

Battersea Dogs and Cats Home have today spoken out against the ‘inadequate sentence’ placed upon the two men referring to the ‘unimaginable suffering’ they caused to 16-year-old ‘Scamp’. Alongside Labour MP Anna Turley, the charity is calling for much tougher sentences to ensure the punishment fits the crime, by launching a major campaign in Parliament to increase the maximum sentence for animal cruelty offences to five years imprisonment.

Battersea’s Chief Executive, Claire Horton, released the following on today’s sentence, “The unimaginable suffering Scamp endured at the hands of his owner, a person he should have been able to trust implicitly, will horrify the nation.

“The two men responsible have been sentenced to just four months in prison. Why? Because magistrates are unable to issue anything more than six months for even the most appalling and callous acts of animal cruelty. England and Wales’ maximum sentence simply must change. Four months for what was done to Scamp is neither a fitting punishment nor a deterrent.

“Animal lovers will surely want to come together and join Battersea and other respected animal welfare charities so we can make our collective voice heard for animals like Scamp.

“Our tougher sentencing campaign is already making its mark. We’re asking the public to write to their MP and call for a five-year sentence for such shocking acts of cruelty as we need the punishment to fit the crime.”