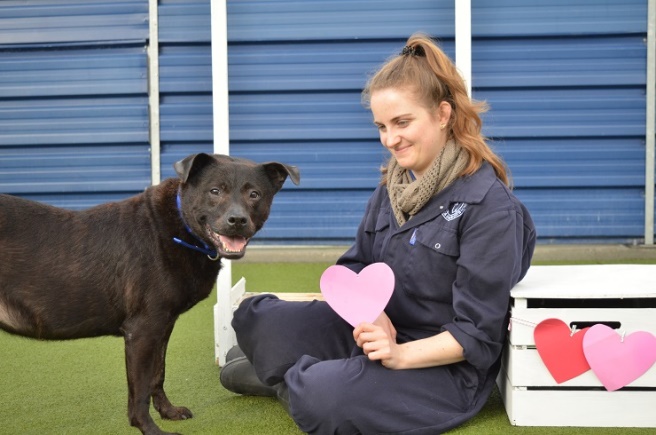 As Valentine’s Day approaches, the Staffies and Mastiffs at Battersea Dogs and Cats Home are on the lookout for love!

The newly installed ‘Battersea Kissing Booth’ has proven quite the hit with both Staffordshire Bull Terriers and Bull Mastiffs, who have been lining up in anticipation to show their softer side, having their photos taken in the hope that a caring owner may spot their picture, fall in love and take them home for Valentine’s Day.

Battersea’s Head of Canine Behaviour and Welfare, Ali Taylor, had the following to say on this exciting new venture, “There are a lot of misconceptions around Staffies and Mastiffs – many people think they’re tough dogs who don’t have much of a taste for tenderness. But these canines crave affection and attention as much as the next breed and they make wonderful, loyal and loving pets – they’re just waiting for someone to give them a chance. They’re all hoping they won’t be left alone in? the kissing booth this Valentine’s Day. Could you be their perfect match?”

Sadly, Staffordshire Bull Terriers are one of the most vulnerable breeds to homelessness, making up to 15 per cent of all dogs that were seized by councils last year. A combination of overbreeding, irresponsible ownership and bad press has only contributed to this incredibly sad state of affairs for Staffies. However, this is more than just hard luck. Given the chance both Staffies and Mastiffs can make fantastic pets that thrive on human company.

In 2011 Battersea launched the ‘Staffies, they’re softer than you think’ campaign, which looked to address the misconceptions around the breed and show the truly loving nature of the soft Staffie. For further information about the campaign click here.

In fact, the fallacies surrounding both Staffordshire Bull Terriers and Bull Mastiffs has been a recent topic of discussion here at Dogs Today. Click here to read more.