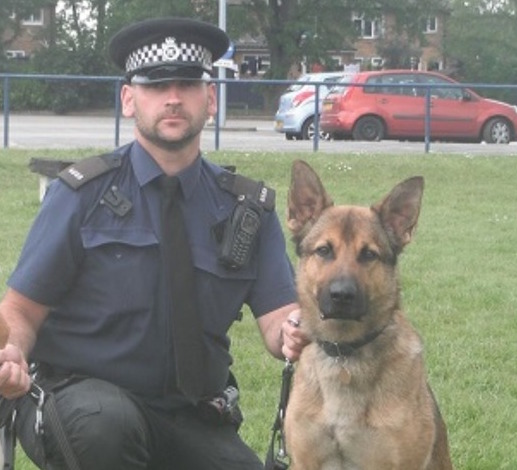 Merseyside Police has confirmed that one of its valued police dogs, PD Ghost, died following an incident while on duty in the early hours of Tuesday (8 November) morning.

Ghost, a three-year-old German Shepherd, and his handler, Constable Dave Bartley, had been deployed following reports of a break-in at an address on Southworth Road, Newton-le-Willows, and sent to trace the potential offenders. A short time later, Ghost was found on the M6, having been hit by a vehicle. He suffered fatal injuries.

It was tragic and unprecedented event that cut short a glowing career, with Ghost having been a crucial element in numerous successful arrests. Constable Bartley is receiving support from his colleagues at this time.

Dog Section Inspector Tony Byrne said, “When Ghost first joined the force he actually could not smell, which isn’t good for a police dog, and it was discovered that he had polyps in his nose. He also suffered a lot of damage to his tail and last year he had a torsion in his stomach and it was feared that we would have to retire him. It is rare for dogs to recover from things like this but he was [a] big strong dog and came back from it.

“Our police dogs are highly valued members of our force, who work closely with their handlers, so as you can imagine this is extremely upsetting time for Ghost’s handler and our whole department.

“The dogs are an integral part of the force, who work day in, day out to assist in our fight against crime. Ghost and his handler were a prolific team and he was a much valued member of our team and will be sorely missed.”

Merseyside’s Police Commissioner Jane Kennedy said, “I feel desperately sorry for PD Ghost’s handler and for the whole team who worked with him.

“They should be proud of the commitment Ghost gave. He was part of the police family and I have no doubt will be sorely missed.”