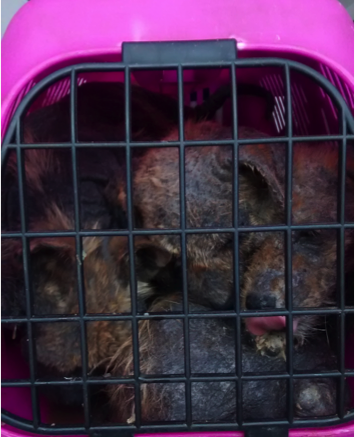 These three dogs were in such a poor condition when they were found that an RSPCA inspector first thought they were foxes. The three dogs had been crammed into a tiny pet carrier and left outside a home in London over the bank holiday weekend.

Inspector Mitchell Smith attended to collect the dogs and said, “I was called to the address at around 7pm saying a cage with three puppies inside had been dumped outside their front door.

“I was half expecting to be greeted by three small, fluffy puppies but, unfortunately, it was a very different story.

“I discovered these poor dogs stuffed into the carrier – which was far too small for them, they couldn’t even turn around.”

After being examined at the RSPCA’s Harmsworth Hospital, it was found the dogs were actually adults, at around two years old. Their appalling skin is due to the skin mite demodex, which can be fatal if left untreated, as it suppresses the immune system, causing secondary infections. RSPCA veterinary director, Caroline Allen, said, “The dogs will need long-term treatment because they are in such a bad way, but will hopefully make a full recovery over time.

“They were sitting in a pool of diarrhoea when they arrived here with us. They were wet, filthy and foul-smelling.

“We bathed them and cleaned them up, started treatment for the associated skin infection, wormed them, clipped their overgrown claws and fed them – they were very hungry.

“They have obviously been suffering for a long time as the skin is so thickened and they only have a few tufts of hair. We are not even sure what breed they are.

“We wonder if they have come from somewhere like a puppy farm, as they are all young females and don’t seem to know what a lead is.”

The RSPCA is appealing for any information about these dogs, as well as requesting donations to aid their recovery. More information can be found here.