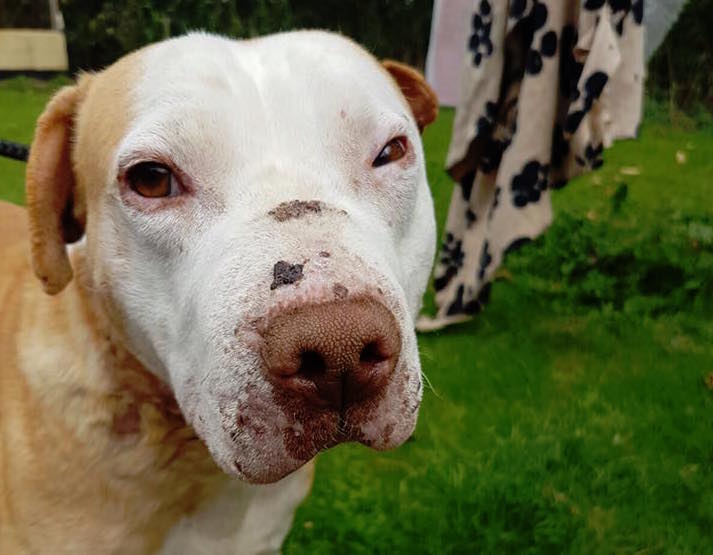 This dog was used as little more than a training tool by dog fighters; his teeth have been filed down to nubs so he could not fight back when set upon by others. He was found terrified, running loose with a muzzle on, and was so stressed when he was caught he actually passed out.

Hector, as he has been named, is now is the safe hands of Ravenswood Pet Rescue on the Cambridge/Norfolk border. He is covered in cuts and scrapes and old scars, but it is the emotional trauma that he has endured that will take the longest time to heal. Ravenswood Pet Rescue is hoping to find Hector a loving, quiet foster home, away from children and other animals, where he can let his guard down and begin his recovery.

Shar Pei cross Hector is a living warning against giving pets away ‘free to a good home’ or very cheap, as they can easily fall into the wrong hands at this ‘disposable’ price tag, and suffer a terrible fate. If you can help, by donating towards Hector’s care or offering him his second chance to be a cherished pet, please visit Ravenswood Pet Rescue’s website here.

Hector’s story is sadly part of a much bigger problem; according to the League Against Cruel Sports, modern dog fighting in Britain is experiencing a resurgence, and it is a cruel bloodspot that is practiced every single day. To sign the campaign group’s petition calling for tougher penalties against offenders and a review of our current legislation, click here. This simply shouldn’t happen in today’s world.