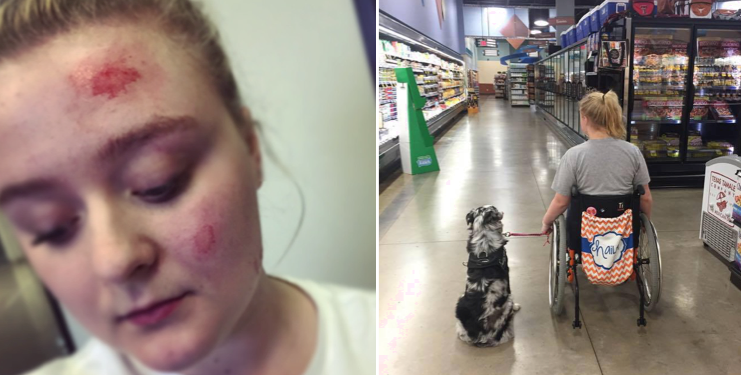 Flynn is an amazing assistance dog, expertly trained to alert his owner Hailey Ashmore to her oncoming seizures. Hailey, amongst other health problems, has epilepsy, and relies on Flynn to tell her to get to a safe place before she loses consciousness. But last year, Flynn missed his crucial ten-minute window of warning before Hailey collapsed – but it wasn’t his fault.

Good morning! We will be doing and Q&A video. Does anybody have any questions for us?

Hailey was visiting her father’s workplace, and didn’t notice that one of his colleagues had been stroking Flynn and distracting him.

“Out of nowhere I remember the world going black,” Hailey told Fetching Apparel. “I woke up with Flynn on top of my legs and my father cradling my head. On the whole left side of my face there was a terrible sting that made me tear up.”

During her seizure, Hailey suffered severe carpet burn on the side of her face, even leaving blood on the floor.

“Please do not pet, call, or do anything to distract service dogs without explicit permission from the handler,” said Hailey. “Next time, instead of a rug burn somebody could get seriously hurt or die.”

Assistance dogs often wear clearly marked vests and harnesses to discourage people from interacting with them – but all too often they are selfishly ignored.