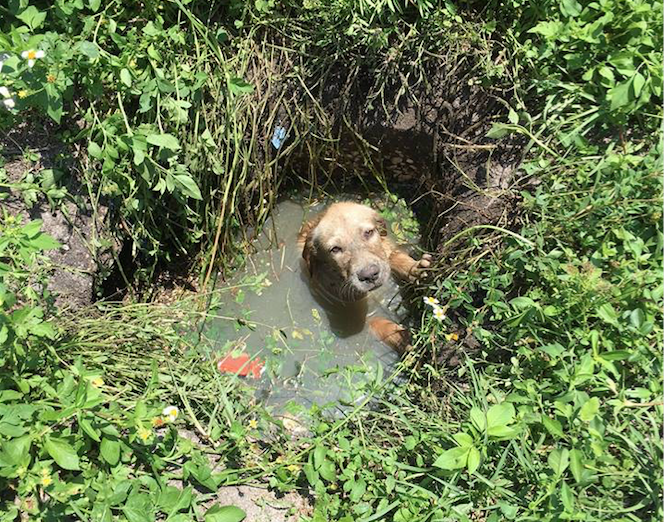 A puppy found trapped in a collapsed septic drain has been adopted by the police officer who discovered him. Deputies were out on a job in St Lucie Country, in Florida, USA, when they heard the distressed cries of the whimpering dog. Following the noises, they were led out to a vacant patch of land, where a puppy was in real peril. The pup became stressed at their approach, so the officers had to use a catch pole to drag the animal out. The dog had become so exhausted with constant struggling that his back legs had temporarily stopped functioning.

Local Human Society staff stepped in to clean up the puppy, who was given the rather appropriate name Puddles, and he was soon walking normally too. After several baths and routine neutering and vaccinations, Puddles was ready for a (literal) clean start. The police officers involved had put flyers up around the neighbourhood to try and track the owner, but to no avail.

But perhaps this was for the best: one of the police officers involved, Deputy James Gettings, had fallen in love. Puddles has now joined his family, including wife Rachael, daughter Evelyn and a Basset Hound named Lacie.

A perfect ending for Puddles.