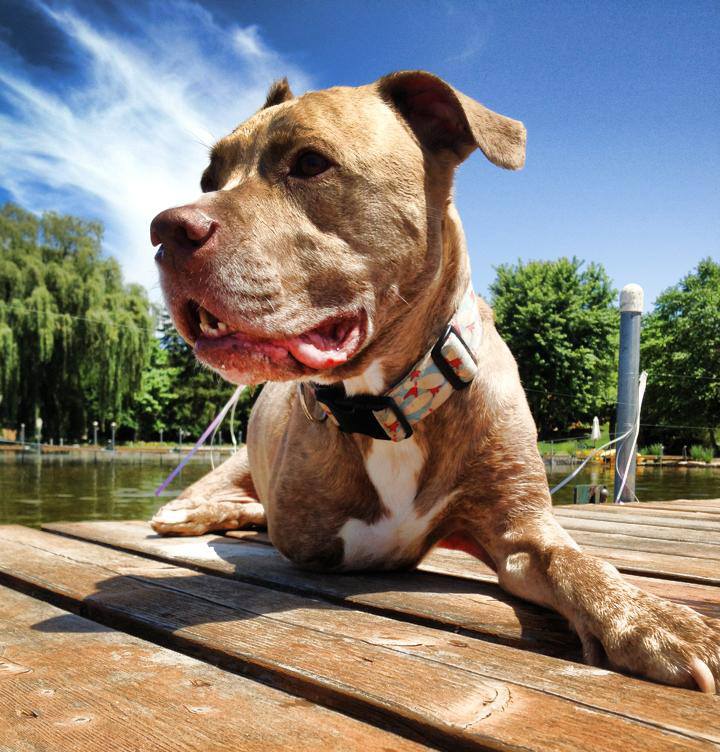 It’s been six years since a Pit Bull name Fifty was involved an incident that would change his life forever. In an act driven by fear and misunderstanding, Fifty was shot a number of times by a police officer. As a result of the injuries he sustained, Fifty lost two of his limbs, but worse still, he was soon made homeless. Fifty was now in a dangerous position – who would possibly want a young male Pit Bull with a disability like this?

Thankfully, Fifty was saved and is now owned by Kelly Michael. Together they campaign against the unfair reputation that Pit Bulls and similar breed-types have, as well as the legislation that often condemns them to death, and tears families apart.

Fifty is a living, breathing example of how a ‘bipod’, as they are known, can live a normal, happy and fulfilling life. Fifty can run, swim and interact happy with humans and dogs – having two legs has never held him back!

His beautiful face and commitment to surviving against the odds has won Fifty many fans. His Facebook page has over 350,000 likes, and his full story can be read there:

“I was born into rescue because my ‘mom’ was rescued when she was pregnant with me. An amazing family adopted me, and I also had another adopted “sister”. I’ve been a proud rescue dog since birth.

“On Sept. 21, 2007 I was shot by a police officer in Berwyn for what was obviously breed discrimination. He shot me in both of my right limbs, causing a double amputation. But my family never gave up and helped me get back on my feet and become a survivor.

“My family lost their home during the economic downfall, and my sister and I found ourselves needing a new home. My days would have been numbered if I had been taken to any other shelter than the one I found myself at… Diane, the wonderful shelter manager at Animal Welfare League – Wabash is my guardian angel. She knew I was special and that having only two legs wasn’t holding me back, and I am alive now because of her.

“I found my forever home 9 months later with my mom and my sister Izzy, and we usually some friends who are swinging by. Mom and I like to foster other dogs looking for homes and do whatever we can to put an end to breed discrimination and end the ignorance. My smile can be infectious, and has been known to change minds.”

Fifty and Kelly often foster other dogs in need, including Jane, a teeny tiny Pittie puppy whom the pair looked after for a number of months. She arrived at their home at just four weeks old, after she was abandoned at a train station. With Fifty’s guidance, she grew up into a healthy, confident young lady and soon found her forever home. but how different things could have been for both of them…