Two water rescue dogs helped take five people to safety after their pedal boat sank about 250 metres off a beach in Salerno, in southern Italy, on Sunday 24 July.

The five, including a woman unable to swim, fell in the water as the boat sank for the most part, forcing them to cling to the part which remained above the surface. As beachgoers watched the incident unfold, lifeguards went into the water along with two water rescue dogs – Golden Retrievers Dylan and Vita, of the Italian School of Water Rescue Dogs (SICS).

“They were so good, they helped us in the rescue operation immediately”

Roberto Gasbarri, President of SICS for central and southern Italy, said, “Dylan e Vita, who are six and three years old respectively, reached the sinking boat and, thanks to their buoyant harness, they allowed those people to stay afloat until lifeguards arrived on two boats.”

Once everyone was taken back to shore without incident, Dylan and Vita have become the entire beach’s mascots, with children reportedly lining up to pet them and get a photo with them.

“They were so good, they helped us in the rescue operation immediately,” said Emanuele, one of the lifeguards. 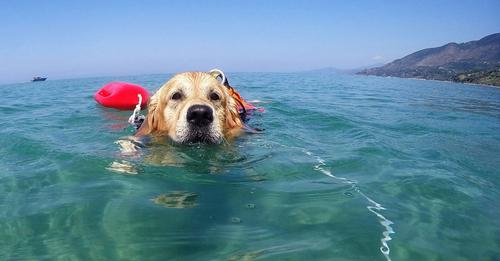 Their help is psychological too, lifeguards added, as they help people struggling in water to remain calm.

“We have seen these wonderful dogs at work many times in the past few years,” said the owner of the beach, Rino Di Costanzo. “They are quick, professional, and can act even in difficult sea conditions. They contribute an added value to the safety of beachgoers.”

This is not the first time a group of people struggling off the coast of Italy were saved with the help of water rescue dogs: in August last year, three Labradors took part in a rescue operation to get 14 people back to shore safely after the sea turned rough.