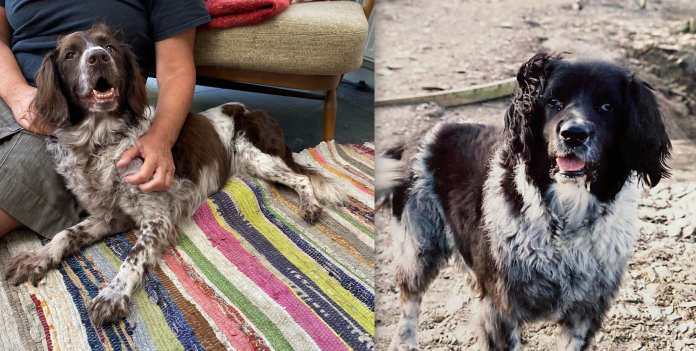 Tandie, a 14-year-old Springer spaniel, arrived at RSPCA Cornwall’s Venton Centre after the sad death of one of her owners, who had adopted her in 2007.

Tandie had originally arrived at the centre as a puppy, along with her mum and nine littermates. They all were rehomed, including Tandi’s brother Eric, who was adopted by Anna Cirant-Carr and her family, from Newquay.

Now back in rescue, elderly Tandie was much harder to adopt out than she had been as a puppy. Due to her advanced age she has limited vision and is completely deaf, as well as suffering from arthritis and a skin condition; the rescue decided the best course of action was trying to find her a forever foster home.

Anna, who lost Eric in 2018, was browsing Facebook when she saw Cornwall branch’s post about Tandie. She looked so much like Eric, she couldn’t resist her and soon took her home.

Anna said, “We were heartbroken when Eric died in 2018 and struggled to cope without a dog around the house so we got Labrador cross springer spaniel Freida three months later. But when we saw Tandie’s story online we knew we had to give her a retirement home to live out her days.

“She’s doing amazingly well – you’d never know she was 14! She eats loads, jumps all over the sofas and follows us around the house.

“Tandie and Eric are so similar in a lot of ways. She follows me around just like Eric did and they both have the same sad stare when they want something! However, Tandie is much more cuddly than Eric; he liked a pat on the bum but would be horrified if you gave him a hug whereas Tandie wants to be on your lap!”

A spokesperson from the branch said, “It’s like it was fate that Eric’s owners saw Tandie’s appeal online and got in touch.

“We’re so pleased that we’ve found Tandie such a wonderful home to live out her days and we’re incredibly grateful to Anna and her family for opening their home to her so she can have the retirement she deserves.”