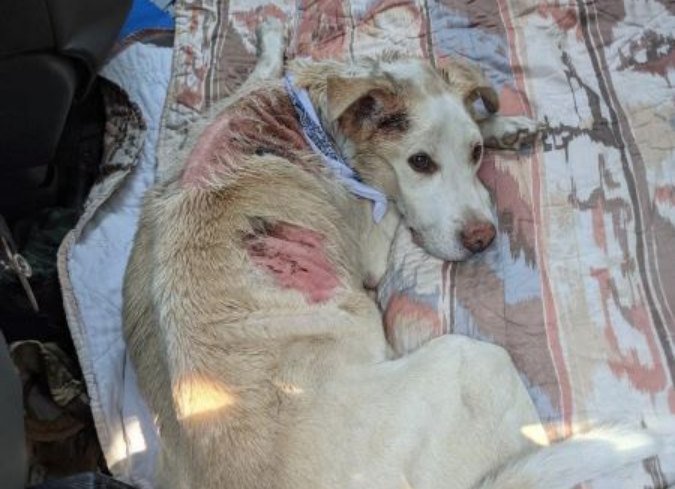 As a raging wildfire tore through the village of Lytton, in British Columbia, exactly a month ago, people in the area had little time to evacuate. When seven-year-old Tonnerre bolted in a panic, his heartbroken owner was unable to find him and was forced to evacuate without him.

He thought he may never see his dog again – but somehow Tonnerre, whose name means ‘thunder’, managed to survived for days on his own. However, he had not entirely escaped the flames: he had been lest with severe burns across his back and sides.

Tonnerre’s owner immediately loaded him into his van, and turned to the British Columbia SPCA for help. Tonerre was taken to a nearby emergency hospital and received the veterinary care he needed.

BS SPCA special constable Jay said, “Tonnerre’s guardian was so thankful for everything that was done to help – he became very emotional as he was talking to me, fearing that there may be many other animals like Tonnerre who had been impacted by the fires.”

Jay, who has been working regularly behind the fire lines in Lytton and Kamloops, added, “We’ve seen some heartbreaking situations, but for the most part we have been able to locate animals who are alive and safe and have been able to reunite them with their thankful families. It’s a very good feeling to be able to make those reunions possible.”