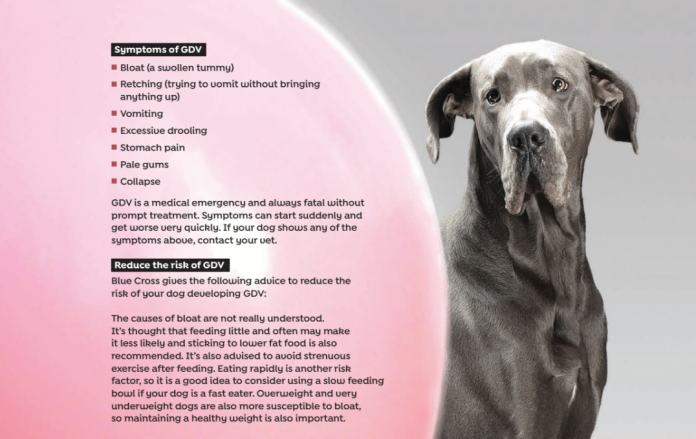 When Sharon Rose lost her young Great Dane Barnaby to Gastric Dilation-Volvulus (GDV), commonly known as bloat, she was devastated – but determined to warn dog owners against this potentially deadly disorder.

“Barnaby was the biggest Great Dane I ever had, and I had Great Danes since 1992,” Sharon Rose recalls. “He was huge and affectionate, and he loved my other Dane, Brooke – though he would push him out of the way if someone was petting him, so he could get the attention instead!

“He was obedient, he had a perfect recall – it took a long time to teach, but we were doing all the Good Citizen tests and we would have made it to gold if not for Covid.

“Barnaby got a rosette at Crufts last year, which was nice – it’s always nice to get a rosette – but what always made me proud is the money he raised for charities, and his work as a canine blood donor.” 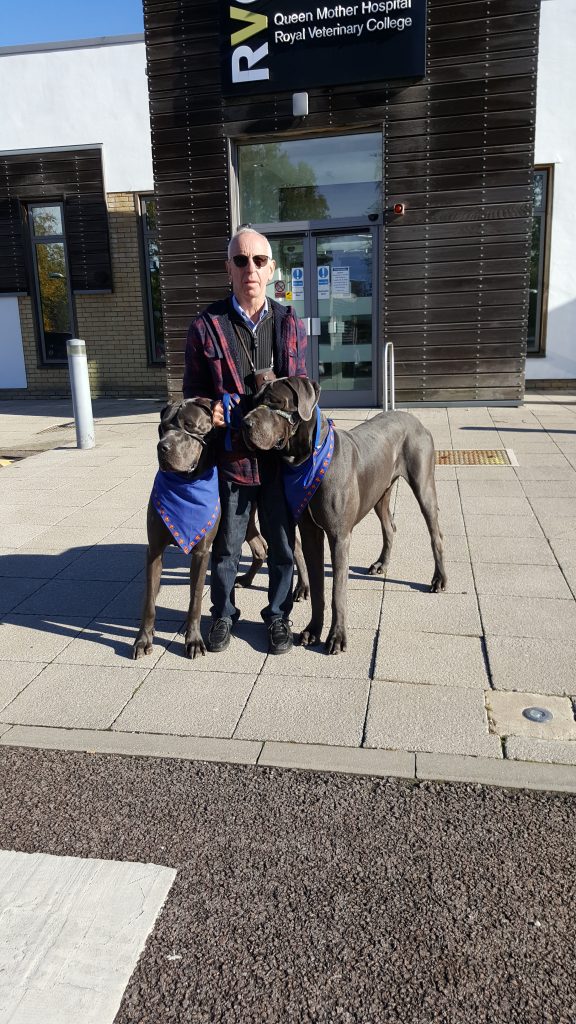 A huge blue Great Dane, Barnaby never failed to turn heads. Sharon used this to draw attention to charity stands and fundraising in events across the UK.

“We did a lot of work with the Animal Health Trust,” she recalls. “Last Spring they had a stand at an event in Newmarket and Barnaby was there, meeting and greeting visitors. People tend to gravitate towards blue dogs, there is just something about them – and by the end of the day the donation buckets had two or three hundred more pounds than it did the previous year!

“We did the same thing for Street Dogs, and would attend Pup Aid every year. The first time Barnaby took part he was in a pram, because he was so young I didn’t want him to tire himself out too much by walking around the whole day!

“We were happy to help any charity that got in touch, as long as we were able to,” Sharon says.

Barnaby’s life was cut short not long before his fourth birthday by Gastric Dilation-Volvulus (GDV), a condition commonly known as ‘bloat’.

Much like Sharon’s previous Great Danes – including father and son duo Bellamy and Baruch, known as the Blue Boys – Barnaby was also a canine blood donor for the Royal Veterinary College (RVC) Blood Transfusion Service.

Sharon says, “He achieved so much in his short life, and he could have done so much more. I was thinking of making him an assistance dog. Great Danes are so soft and gentle, and make amazing pets for therapy – it is something I want to explore. They are so large, someone in bed or on a wheelchair can easily reach for them and stroke them. Brooke was amazing with my mother who had Alzheimer’s – she would stroke her head and smile.

“There were still so many things for Barnaby to do.”

Unfortunately, Barnaby’s life was cut short not long before his fourth birthday by Gastric Dilation-Volvulus (GDV), a condition commonly known as ‘bloat’. 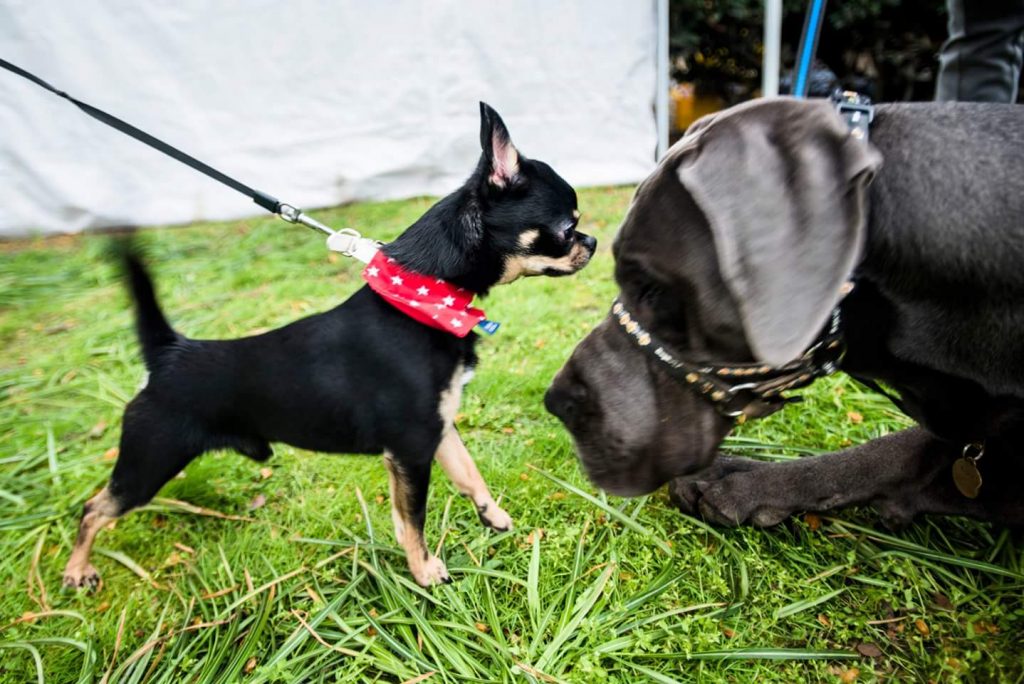 GDV occurs when an abnormal amount of gas builds up in the stomach, and the stomach twists round on itself. Once the stomach twists, the gas can’t escape and pressure builds up, which can restrict blood flow, affect breathing, and lead to shock. If not treated quickly, the stomach wall can become damaged, causing it to bruise, start to die away, or rupture.

Barnaby suffered from GDV in February 2021, but it was quickly treated and he was able to recover. On 27 March he was well enough to run off-lead in a field.

“We had a lovely time,” Sharon says as she shares a video of Barnaby galloping across the field. “There seemed to be nothing wrong with him. I had no idea what was about to happen when I took this video – it is now one of my favourite memories of Barnaby.”

On the night of 9 April, Barnaby suffered a relapse and was rushed to the emergency vet.

“They think he had complications from his last surgery and we made the decision that he wouldn’t have been strong enough to undergo more surgery or tests,” Sharon wrote the next day. “The whole journey from our house to the practice he was crying and it broke my heart.  When he arrived he had a very high temperature, racing heart and was in a lot of pain.

“He was examined, had blood tests, and with the advice of the duty vet and Simon Hayes, I decided to let him go.”

The loss was sudden as it was devastating. Sharon is not new to heartbreak: Great Danes often die much too early, leaving a void behind.

“It is a void in every sense of the word,” Sharon says. “Of course the loss of any dog is painful, but with such a large dog the empty space in your home is so tangible – a constant feeling of absence.” 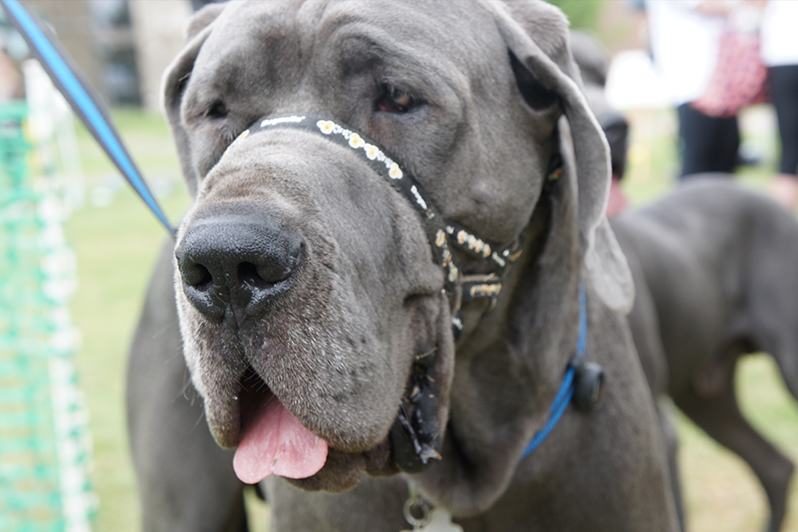 “My husband and I love this breed due to the temperament, but they don’t live long – we have been unlucky. Brooke is now seven years old, and the oldest Great Dane we ever had. But there truly is no other breed for me. I would change them for no other.”

As all other blood donors who have passed away, Barnaby now has a copper leaf with his name on it on the RVC’s memorial tree; Sharon is keen to visit it as soon as the pandemic allows it. She has also donated Barnaby’s body for tissue donation and veterinary science.

“Once the dog is gone, the body is only a shell,” Sharon adds. “I do hope he could help others in death as he did in life.”

One way Sharon is looking to keep Barnaby’s legacy alive is by raising awareness of the danger posed by GDV. The condition is more common in large or deep-chested breeds, such as Great Danes, Newfoundlands, Weimaraners, Basset Hounds, Saint Bernards and Irish Setters – but it can affect dogs of any size, which makes it even more insidious as many pet owners consider it a “large breed disease”.

“It hurts to talk about Barnaby now, but if it saves even just one dog’s life, it will have been worth it.”

“I had no idea it was so prevalent – but I was told any breed can have it, a vet nurse told me she saw a Yorkshire Terrier who had it,” Sharon says. “There is a bit more awareness among owners of giant breeds, but I fear there is not as much knowledge about smaller breeds. Their owners just don’t think it’s a danger to their dog, and may not be aware of the signs.

“You think of bloat and you think of their stomach swelling – but Barnaby’s stomach had not swelled up. There are experienced dog owners who may not know what to look out for; my own husband did not know the signs, which drove the point home to me that there needs to be more awareness about GDV.

“It hurts to talk about Barnaby now, but if it saves even just one dog’s life, it will have been worth it.”