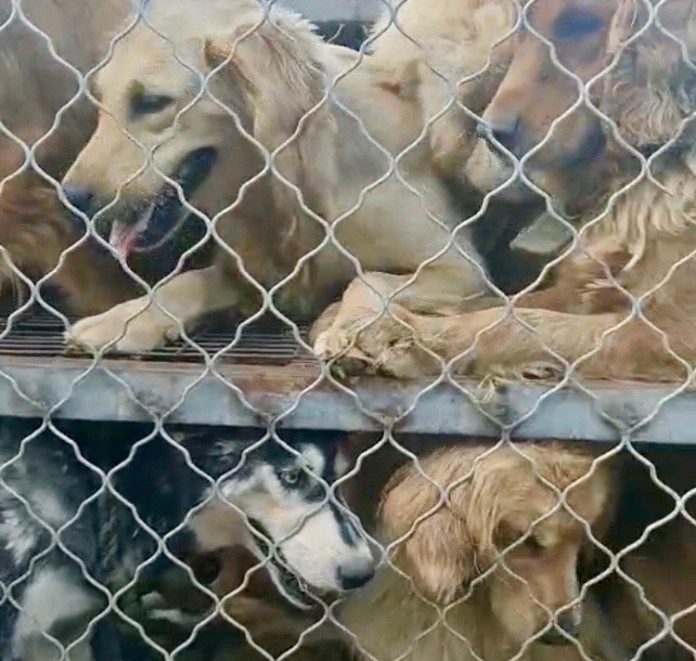 In China alone, estimates suggest a shocking 10 million dogs are killed each year for meat.

Dogs of all sizes and breeds can find themselves victims of the brutal and barbaric meat trade; some are stolen beloved family pets, some are abandoned strays, some are sold by their owners, and some are specifically bred by breeders and sent to the slaughterhouse when they are no longer of use for breeding.

Retrievers are not typically bred for their meat, yet are one of the meat trade’s most popular breeds

Transport to the vile butchers involves being crammed into cages and driven for hours or sometimes days. They are often already in a state of great distress when they are taken; many endure broken limbs, wounds to the bone, bites from other scared dogs, and deadly viruses, such as, distemper, pneumonia and parvo. Some die before making it to the slaughterhouse, from shock, suffocation, dehydration and heatstroke.

For those that do survive the terrifying journey, sadly the terror does not end there. Once they arrive, they are forced to endure the most horrendous forms of abuse as they are tortured to death in front of each other. It is not uncommon for dogs to be bludgeoned, cut, beaten, amputated, skinned alive or thrown into boiling water. Footage from inside slaughterhouses, butchers and markets show it to be nothing more than callous abuse and the worst example of humanity.

This kind of torture is supposed to infuse the meat with traditional medicinal properties, something that is widely disputed. Shockingly, China has no national laws banning animal cruelty or the consumption of dogs and cats, so perpetrators continue to go unpunished.

The majority of dogs found in Chinese slaughterhouses are pets or retired breeding dogs. Retrievers are not typically bred for their meat, yet are one of the meat trade’s most popular breeds.

LRRSE has dedicated Chinese colleagues that work incredibly hard on the ground to rescue dogs and keep them safe from the meat trade. As a UK registered charity, we are run entirely by a small team of dedicated volunteers, all bonded with the simple aim to unite as many Labradors and Golden Retrievers with loving forever homes.

We never say no to any dog that is in need of our help, whether in the UK or abroad, if we believe we can help them live a good life. Currently we have nearly 90 Labradors and Golden Retrievers (as well as a few other breeds!) in shelters in China, patiently waiting to be brought back to the UK.

Rehoming dogs locally in China is rarely possible and if achieved they are at risk of being stolen and returned to the system. Many large dogs are not permitted in the cities and country homes are the ideal location for thieves. Therefore relocating dogs from high-risk situations to areas with greater demand for adoption is a lengthy but essential part of our work.

Our volunteers often have to pay butchers thousands of pounds to free these animals and stop them being needlessly murdered. Once in our care, many are already suffering from various life-threatening diseases that require around the clock care to bring them back to full health.

Established as a registered charity in 1994, our work has increasingly moved further afield when faced with the harrowing atrocities of the unregulated meat trade. Louise Dixon and Sue Birmingham, trustees at LRRSE, say, “Since rescuing our first China dog, we have been committed to the rescue of as many of these beautiful souls as we can. With our wonderful team of volunteers and supporters, we have many Chinese dogs in their forever homes in the UK all living their best lives, far from the horrors they were rescued from.”

Perhaps the most prominent example of the Chinese dog meat trade remains the Yulin ‘Lychee and Dog Meat’ festival. The annual 10-day event, first held in 2009, runs in line with the summer solstice each year and has courted widespread controversy and publicity, both within China and abroad.

Animal activists, celebrities and many Chinese citizens have been increasingly vocal in their opposition of the festival and the practice of eating dog meat in general. But remarkably, the event still runs each year, resulting in the slaughter of thousands of dogs.

However, the real problem extends far beyond this. China remains the world’s largest dog meat market, with nearly 100,000 tonnes produced every year. Whilst dog meat is not typically part of a mainstream Chinese diet, there is increased consumption in many provinces, such as, Guangdong, Yunnan, Guangzi, Jilin and Liaoning. Defenders of the practice argue it is a longstanding Chinese tradition that must be upheld, but how could such heartless cruelty deserve a place in any tradition?

Encouragingly, there are promising glimmers of hope as progress in changing attitudes has been made. The Chinese cities of Shenzhen and Zhuhai became the first to ban the consumption of dogs and cats under new rules that came into effect in May, whilst the Chinese Ministry of Agriculture and Rural Affairs released draft legislation stating that dogs are “companion animals who are not for eating”, removing them from its list of approved domesticated livestock

But changes in legislation can be notoriously slow, and will not come in time for the thousands of animals killed every day in slaughterhouses across the country. As part of our work, LRRSE has already spent several years rehoming dogs from China, however the pandemic has only brought further challenges.

Dixon adds, “The process has been made increasingly difficult and very much more expensive since the outbreak of coronavirus but we remain committed to helping as many dogs as possible, and only wish we could save them all.”

For the dogs still needing our help in China, the situation is more desperate than ever. With enhanced border controls and ongoing travel restrictions, usual routes for transporting dogs out of the country have shut down.

Spaces on remaining flights leaving China are proving impossible and come at a hugely increased cost in the thousands per dog, depending on weight and size. This amounts to a staggering total cost in excess of £150,000 to ensure the safe arrival of all the dogs currently in our care, not to mention the costs of keeping the dogs safe and well in China.

After all their suffering, this is a price we are determined to pay to ensure they find a safe and loving home in the UK. We believe saving just one dog won’t change the world, but it will change the world for that one dog.

While there are reasons to be hopeful, change cannot come soon enough for the dogs living in fear of their lives. As a small charity, we rely solely on public donations; every penny counts and means we can continue to provide love, care and shelter to as many dogs as possible.

LRRSE are launching their #HomeForChristmas campaign to give the gift of a forever home to as many slaughterhouse survivors as possible this Christmas. To donate, please click here. 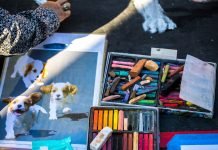 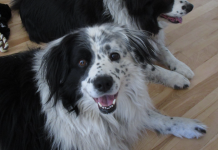