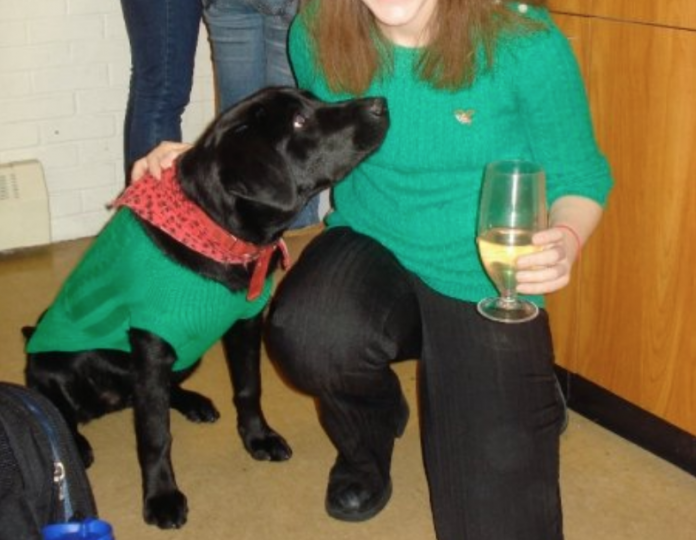 When I was in third grade, I took home the class pet – a crayfish – and promptly lost him in my yard. He was never seen again.

Pincher was (wisely) the only pet I ever had until I got to college.

One day, during our sophomore year, my roommate and I applied online to raise and train a seeing-eye dog. Frankly, I never thought we would be chosen due to inexperience, but one month later, Helen was here.

Helen came to us in winter–her thick, black coat in stark contrast with the Ithaca snow. She woke up every hour of the night that first month, an insomniac Labrador with a weak bladder and a relentless bark, to boot.

One Friday early on, I remember standing outside in an ice storm wearing paper-thin pajamas and wrangling Helen on her leash. People were coming back from parties–red-faced, drunk, smiling–and staggering to their beds. I was overcome with a feeling of dread–Helen had stolen my chance at a “normal” college life.

And it was only the beginning.

Over the next two years, Helen became the poster child for what a seeing-eye dog in training absolutely should not be. She pounced on strangers, humped relentlessly and swallowed everything from the in-seam of my mom’s favorite jeans to my entire key set – Mickey Mouse chain and all.

By the time she was a year old, Helen weighed 80 pounds and was nearly impossible to walk on leash. Often, she got loose on her early morning bathroom breaks and charged across the campus greeting students on their way to class. 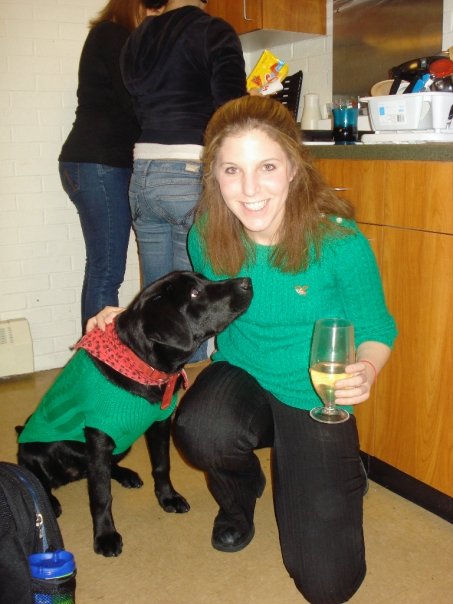 As Helen’s seeing-eye dog training intensified, her proclivity for disaster did as well. She became notorious for pooping in movie theaters, grabbing sandwiches right out of unsuspecting hands, and even scratching my cornea in an unexpected humping incident gone wrong.

Growing up, I never had much confidence in myself. I had severe anxiety as a teenager, and I had been depending on my college experience to be an uninhibited fresh start. As I plowed through misadventure after misadventure with Helen, I began to gradually recognize that if I could take care of another living, breathing entity, I could certainly take care of myself.

Then, as abruptly as she had entered my life, Helen was gone. Due to a combination of her high-strung temperament and immaturity on my part (read: I was only 18 when I got her), Helen failed out of the seeing-eye dog program. She moved in with my former roommate’s family in Philadelphia where she lived until 2015 when she died suddenly from a heart condition.

I would have liked to have seen Helen lead the blind, but in my eyes, she had succeeded in a different way

After my junior year of college, I never saw Helen again.

Some people might consider this a failure. Helen did not achieve what she had been bred to do. I would have liked to have seen Helen lead the blind, but in my eyes, she had succeeded in a different way.

Ironic that initially I was worried Helen would detract from my college experience and my ability to feel like I belonged. In the end, a sense of belonging was exactly what Helen provided – she made college feel like home.

I will always remember Helen for her elaborate Halloween costumes, for the peanut butter she slurped like water, and for all the lives she touched; she was better than any therapist my friends and I had ever had.

Helen was only on this planet for 2,555 days, but her memory is with me always.