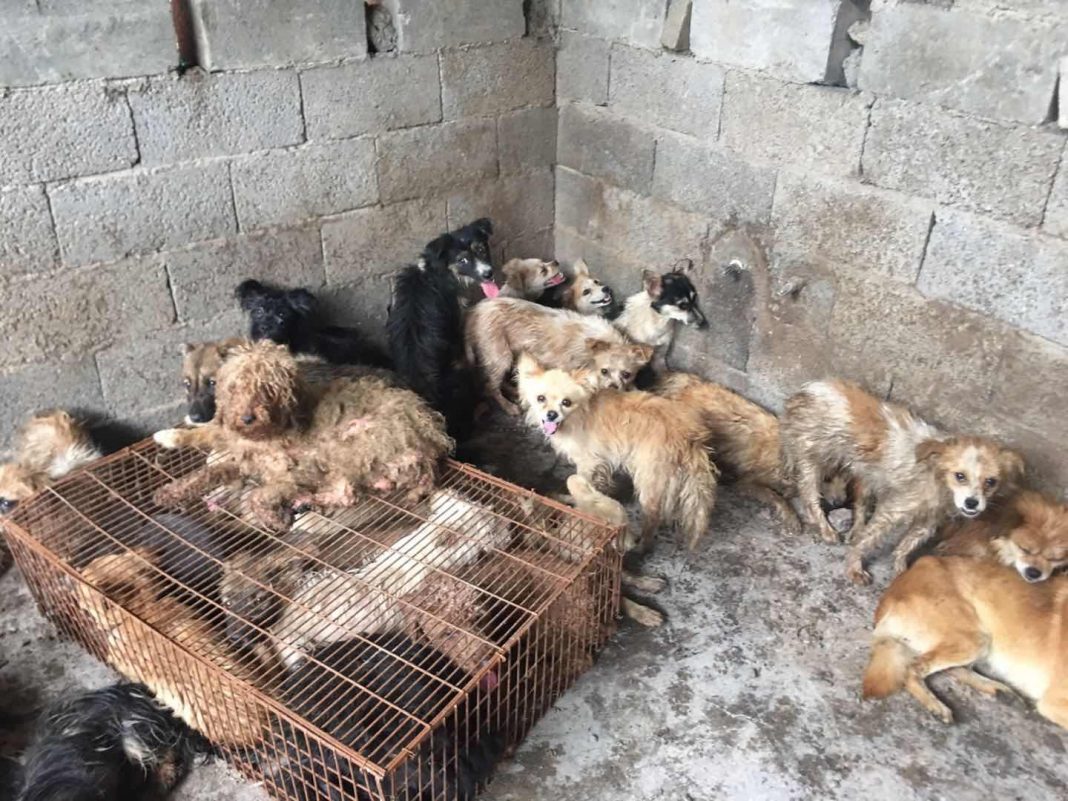 After rescuing 62 terrified dogs from Yulin on 12 June, a group of Chinese animal activists released distressing images and footage from inside a filthy, backstreet dog slaughterhouse in the days ahead of the city holding its annual dog meat festival.

The Yulin dog meat festival begins in earnest today, 21 June, to mark the summer solstice. It is not a traditional festival, but was invented as recently as 2010 by dog traders trying to boost flagging dog meat sales. When first launched, as many as 15,000 dogs were killed during the core festival days, but Chinese and international pressure has seen this figure decline to around 3,000 dogs.

However, many hundreds are still killed each day in the weeks leading up to the festival, and an estimated 10 million dogs and 4 million cats are killed for meat throughout the year across China. 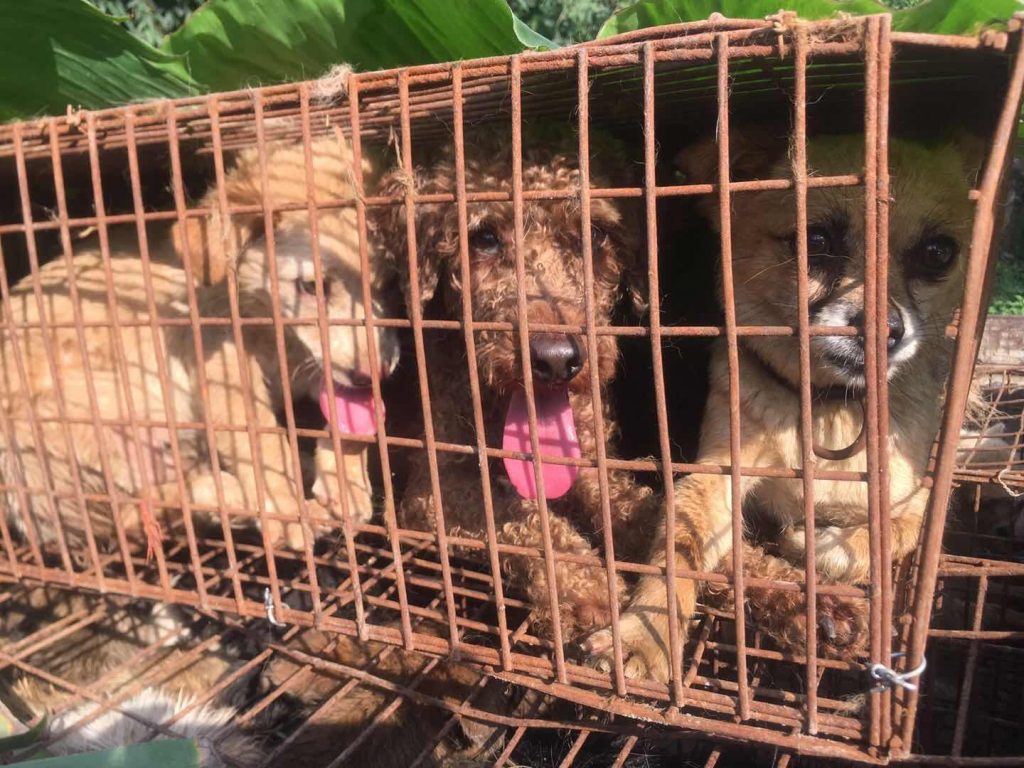 Most dogs and cats caught up in China’s meat trade are believed to be strays snatched from the streets and pets stolen from people’s backyards, which is a violation of Chinese laws. They are crammed into wire cages and driven for hours or even days across the country, before reaching the slaughterhouse where they are beaten to death.

Claire Bass, Executive Director of Humane Society International/UK (HSI), said, “The dog meat trade in China is first and foremost about crime and cruelty. The Yulin festival is one small but distressing example of an unspeakably cruel trade run by dog thieves and sellers who routinely steal pets in broad daylight using poison darts and rope nooses, defy public health and safety laws, and cause horrendous suffering, all for a meat that most people in China don’t consume.”

The dogs in the photos, received and released by HSI, were severely dehydrated and malnourished, with some showing signs of sickness and infection. They are mostly small breeds typical of pet dogs in China, and some were still wearing their collars when rescued. 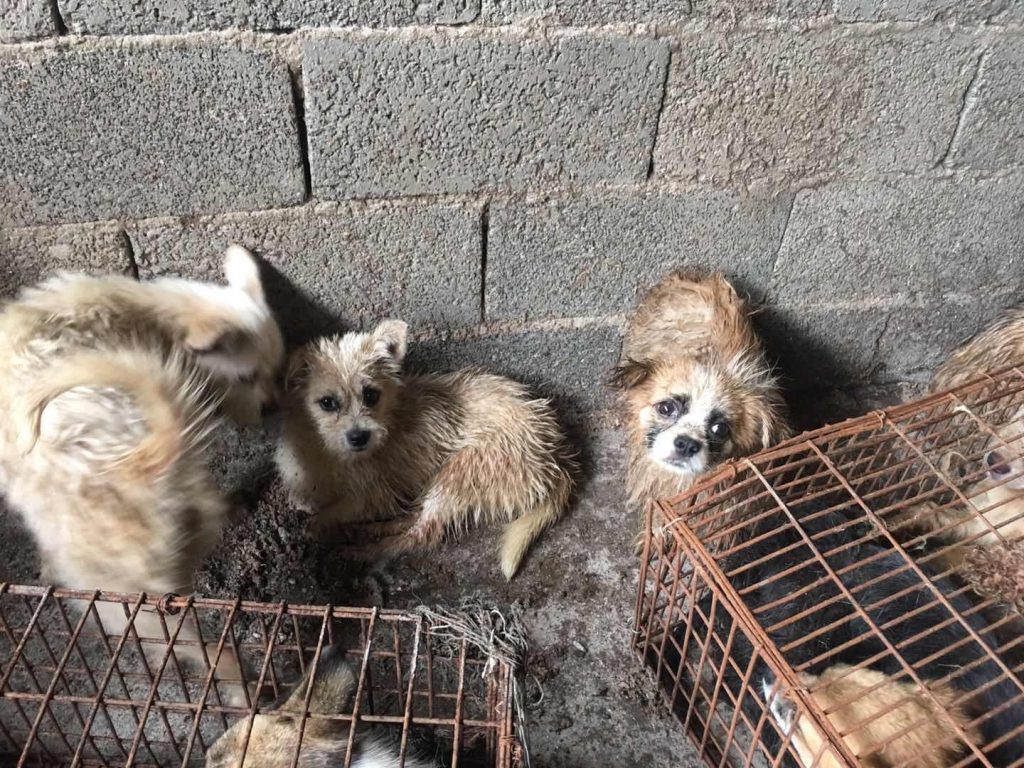 Wei, one of the Chinese activists, told HSI, “It was swelteringly hot inside the slaughterhouse when we got there, the dogs were exhausted and panting, some pressing themselves tight against the wall in an effort not to be noticed.

“Others chased around our legs eager for attention. We noticed straight away that some of them were wearing pet collars so they were probably stolen, and some of them looked very sick so we quickly loaded them on the truck to get them to our temporary shelter quickly to receive emergency veterinary treatment.

“The slaughter man told us that these dogs were likely one of the last truckloads of dogs entering Yulin before the festival because the local government was likely to stop further trucks from entering the city, but we didn’t stick around to verify that. 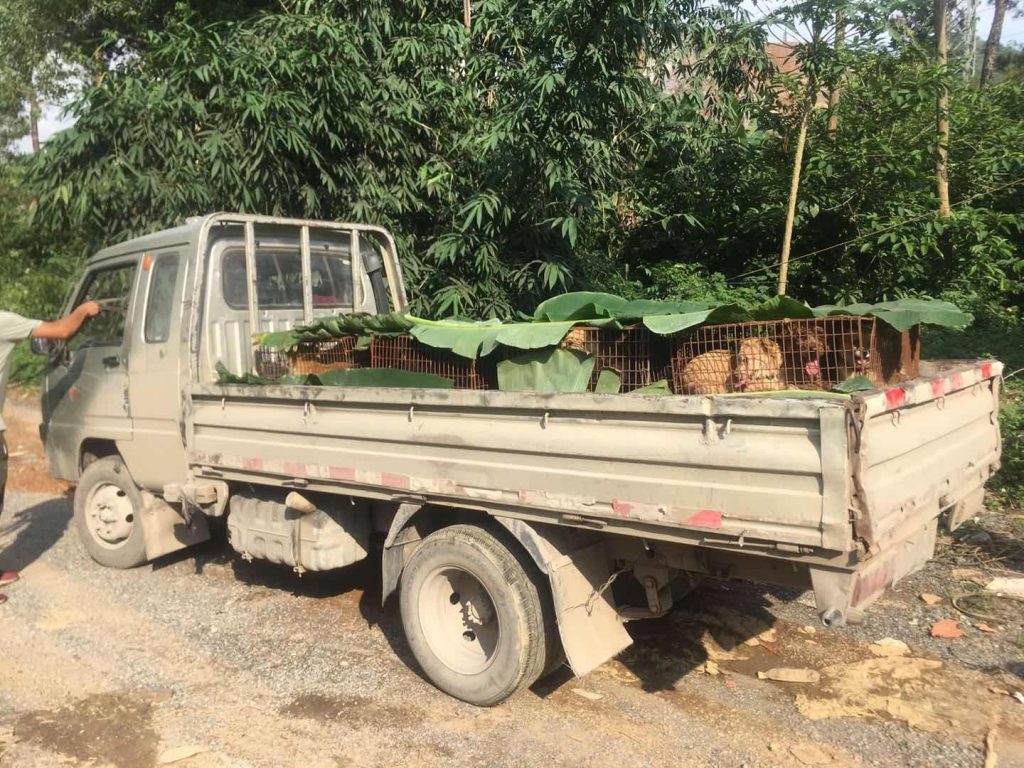 The 62 dogs were immediately driven to a temporary shelter where they received emergency care, food and water. The dogs were rested for several days before leaving Yulin to make the journey to the various different permanent shelters that will care for them longer term, including one supported by HSI in northern China. Some of the dogs who receive HSI help will eventually be placed for adoption in the United States, whilst others will be available for adoption within China or be cared for longer term at the shelter. 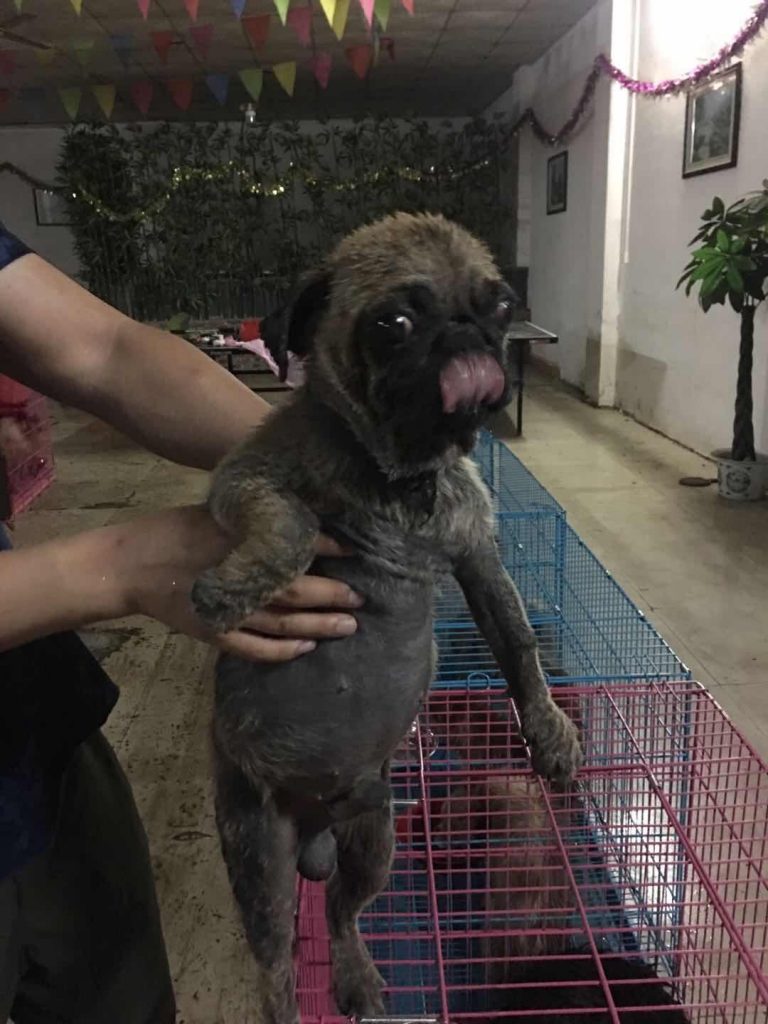 Dr Peter Li, HSI’s China policy specialist, commented on the rescue, saying, “Yulin is a very tense place right now, with dog traders and slaughterhouses on high alert, so it was difficult for these Chinese activists to win the trust of this facility to release the dogs. We commend their efforts to show the world the suffering of these poor animals, and to expose the dog theft that lies behind the dog meat trade.

“These dogs are traumatised and in need of veterinary treatment, but they are the lucky ones because for them at least the horror of Yulin is over. Sadly, thousands more will still die at Yulin, and millions across China, unless decisive action is taken. So we urge the Chinese government to show that it will not tolerate the dog thief gangs who perpetuate this trade, and bring an end to the brutal dog and cat meat trade.” 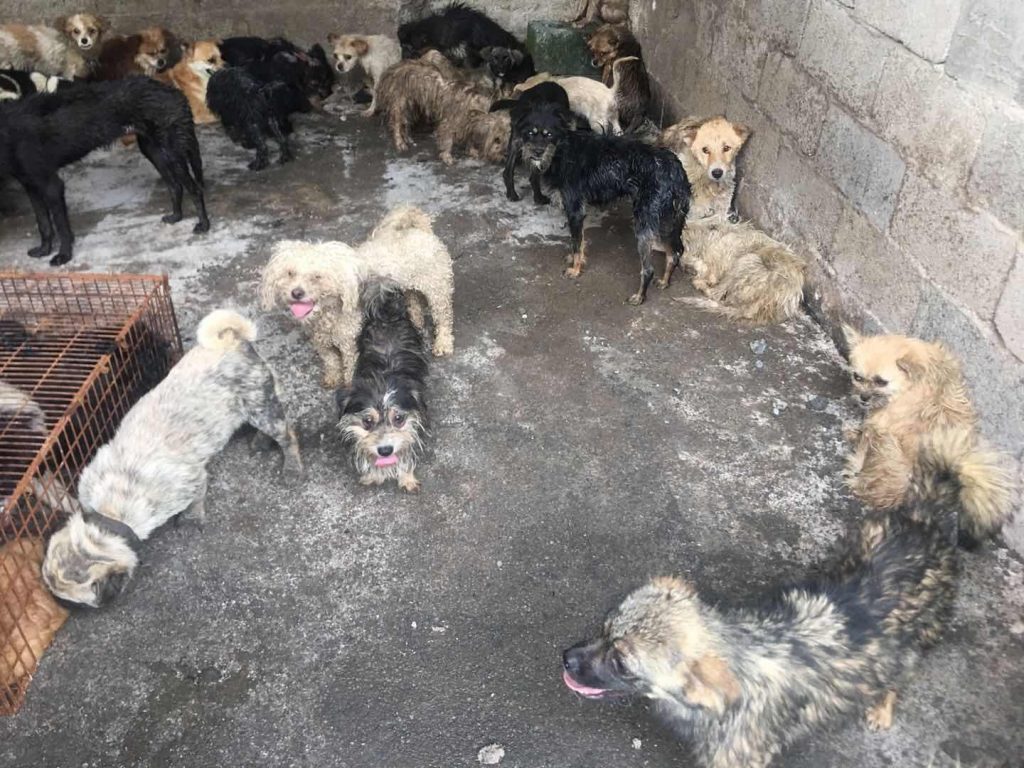 As well as being a horrendous issue of animal welfare, the dog meat trade also poses a serious threat to human health. The World Health Organisation has warned that the dog trade spreads lethal diseases such as rabies and cholera.

Yulin has long been a city with one of the highest rates of human rabies cases in China, and the local trade undermines the Chinese government’s goal of eliminating rabies in the country by 2025. Selling and processing meat from sick and dying dogs in Yulin and elsewhere is also a serious violation of China’s food safety law, yet the trade is allowed to persist with relatively little legal sanction. 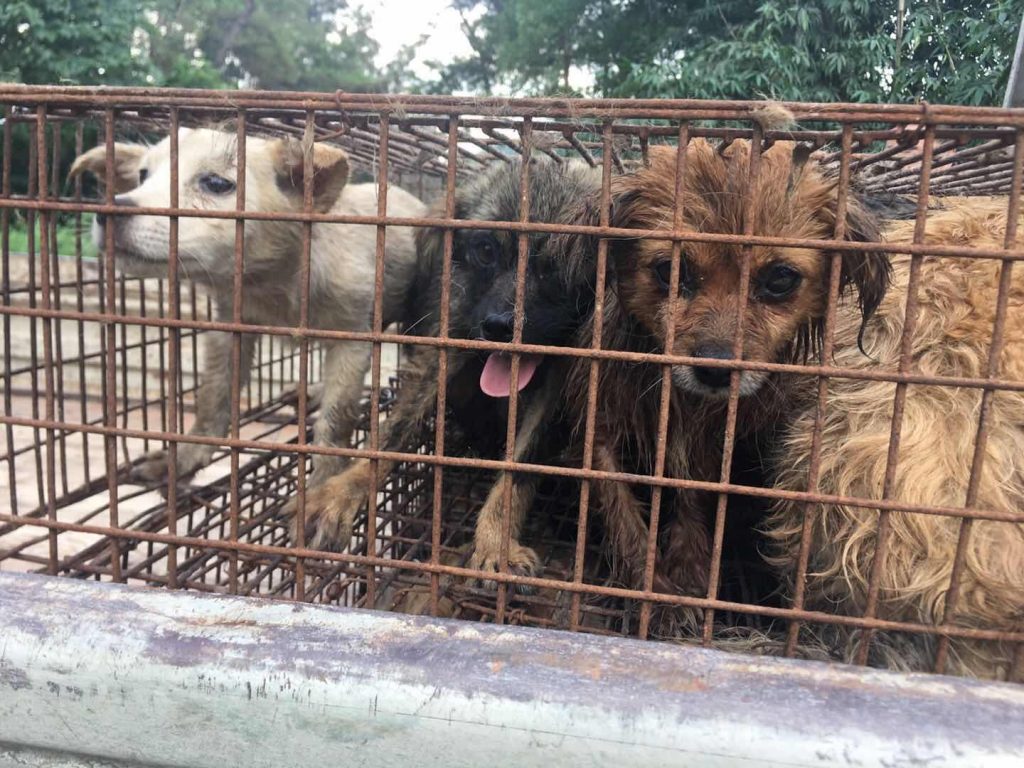 As the festival gets underway, actress Dame Judi Dench has sent a heart-felt message of support for Chinese activists who passionately campaign to end the event. Most people in China don’t eat dogs, and pet owners and dog thieves have had numerous violent clashes.

Dame Judi Dench said, “It fills me with sadness to think that the Yulin dog meat festival is just around the corner again. So I wanted to send this message as a symbol of my solidarity with all the thousands of people in China against the dog meat trade, who love their dogs and cats just as much as we do, but who go through the awful heart ache of having them stolen by dog thieves.

“I cannot imagine the suffering of those poor dogs, and I hope very much that one day soon this cruel trade will end.”