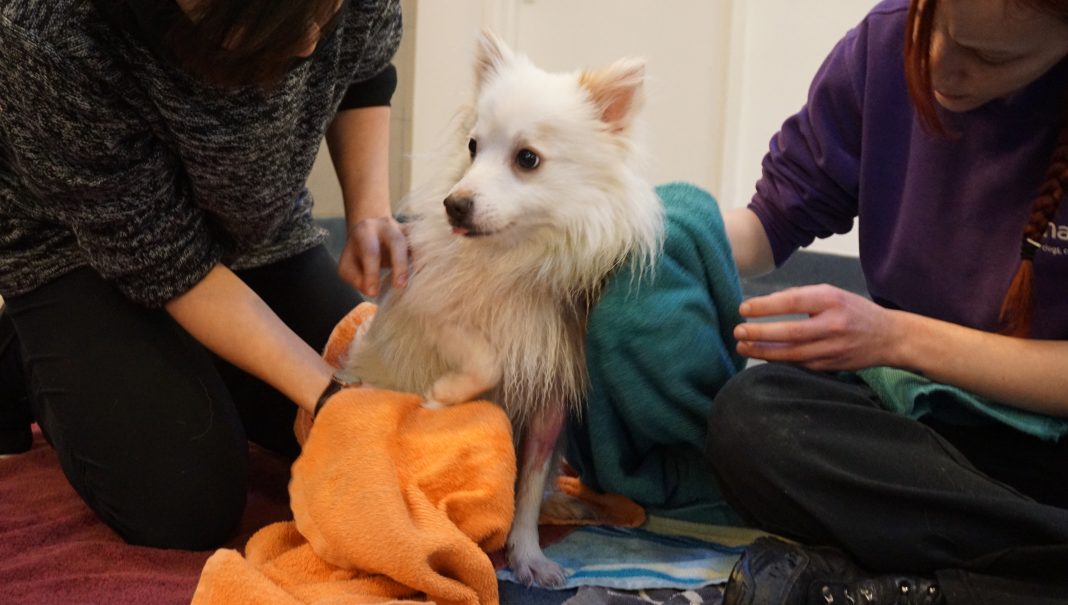 An 18-month-old Japanese Spitz was taken into Mayhew Animal Home by a concerned member of the public, after he was found wandering the streets at night in Brent. The poor pup, since named Fox, had the charity’s vet team baffled with mysterious, raw-looking rashes on his neck and legs. They were clearly causing him pain, but with no collar or microchip evident, there was no way of finding out what had happened to him. Aside from his obvious injuries, Fox seemed clean and well-groomed – it was hard to believe he was a stray. The mystery continued at his first general health check. Animal Welfare officers took a series of swabs for the team to check, thinking his sore rashes were a sign of a skin infection. To their surprise, the results came back clear and there was no sign of an infection. Medicated baths seemed to make the rashes worse, so – keeping Fox as comfortable as possible – vets decided to monitor his skin instead. After a few days of careful observation and a buster collar to stop Fox from scratching it, the rashes appeared to be calming down. Once the irritation disappeared, Fox’s exposed skin was shiny and hairless, and no longer seemed to be causing him any pain. It was concluded that his condition was likely to be a result of old trauma, possibly a burn, which had flared up again after being exposed to an unknown irritant on the streets. Mayhew kept Fox’s skin clean and well cared for. Once the inflammation reduced dramatically, Fox was able to show his true colours – as a bouncy, happy, friendly pup! We will never know Fox’s full story, but he is now looking for his happy ending in a forever home. He needs a knowledgeable and active owner who has lots of time on their hands to dedicate to training and socialising him for the big wide world. If you think you could give Fox a home please visit his profile.