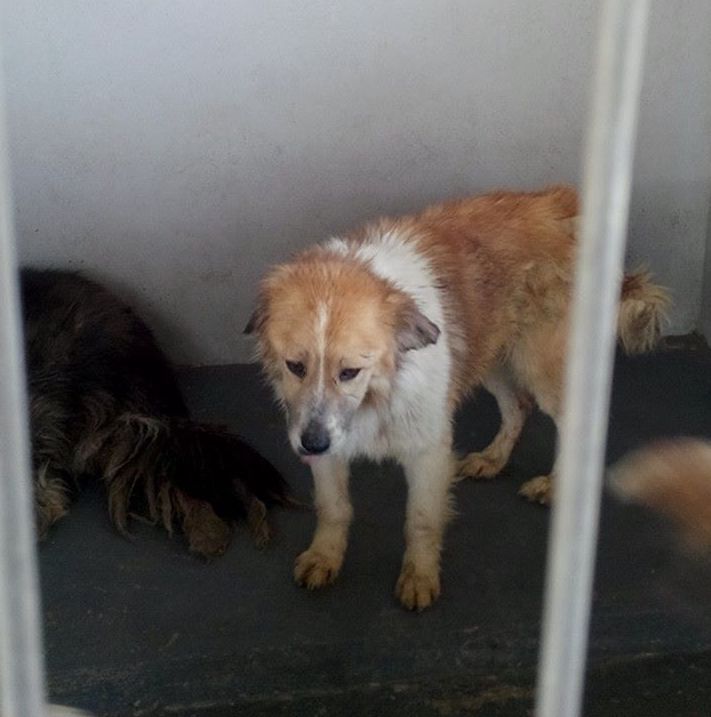 Ursu, a Romanian stray dog that miraculously survived a notorious kill shelter at seven years old and was later happily rehabilitated against all odds, now has his story told in a book written by his rescuer.

‘Ursu – Never Give up on a Dog’, tells the story of how a Romanian stray, so traumatised by human brutality that he had to be netted or sedated before being approached, managed to find happiness in the home of two dedicated owners. The book tracks the first two years of Ursu’s life with his rescuers Sarah Napier and her husband Robert, and has been publicly praised by actor and animal activist Peter Egan, as well as actor Thelma Barlow.

The book inspired TV presenter and former newsreader Jan Leeming to meet him on a recent trip from Kent to West Yorkshire in January.

Jan Leeming has an adult rescue of her own; René, a Pappilon from Battersea Dogs Home. Jan took the time out to meet Ursu where he is now happily rehabilitated. She said, “Ursu was a delight to meet. Happy, friendly, balanced and very accepting of René entering his personal space. The patience that Sarah and her husband have shown is remarkable. What is even more astounding is how they managed to reach through to Ursu and turn him around from a feral frightened seven-year old stray into the placid and relaxed dog that he is today. It’s a fantastic read that I couldn’t put down. ”

“It was a complete surprise and pleasure to have Jan join us,” says Sarah. “Such a household name. Ursu took to Jan instantly and it was such a fillip to have someone in the public eye recognise both Ursu and his book. The way in which these sentient beings are treated is deplorable and the more the word spreads the greater the pressure on all countries to treat these defenceless animals with decency.”

Thelma Barlow, best known for her roles in Coronation Street and Dinnerladies, bought the book on the recommendation of a friend, and described it as a book about taking risks, beating the odds, compassion and kindness.

“You don’t have to be an animal lover to enjoy it”, she says.

Ursu – meaning bear in Romanian – managed to survive as a stray, and in of one of the most notorious Romanian kill shelter’s, until seven years of age. The kill shelters of Romania are thus called because of their brutal practices and culling of dogs in inhumane ways – including clubbing, poisoning, starving, freezing them to death and burning them alive. Ursu lived on the streets of Bucharest before being caught by dog catchers and thrown into the notorious kill shelter. Extraordinarily he survived on scraps of food for about three years despite being surrounded by death and disease and was somehow spared the barbaric regular killing of the dogs.

Ursu survived. He inspires us all to never give up.

The horrors Ursu witnessed and experienced made him resent humans. Sadly, as Sarah Napier enquired about Ursu, after spotting him on a UK animal website at the end of 2014, the charity that was sponsoring his keep had just taken the decision that he was too mentally damaged to ever be homed. It took a lot of persuading for the reputable charity to let Sarah take on the dog and it was only after a home visit and on the understanding that Ursu would be taken away if his aggression couldn’t be controlled, that Sarah was given the chance to try.

Ursu travelled from Romania to join Sarah and Robert in January 2015. “The morning after we got him, which had been a very traumatic day for all three of us, Ursu took the decision to come up to me and sit down in front of me and put his head on my lap.” Sarah explained.

“After years of shunning all human contact his behaviour was extraordinary. He was still terrified and feral and inclined to try and bite and it was a long haul to get him to where he is now, but his canine intelligence told him he was somewhere very different and that he should take a chance on us. He is now the most affectionate of dogs and exuberantly happy.”

Downton Abbey actor Peter Egan is a well-known animal activist, working to improve the lives of stray dogs. Egan travelled to Romania with a team in the summer of 2018, to witness and film a 30 minute documentary entitled ‘A Dog’s Life – the Homeless Dogs of Romania’.  The film exposes the inhumane conditions that hundreds of dogs kept in daily in the Romanian so-called shelters.

Peter described the book as a “brilliant read”. He said,“Having recently filmed in Romania I know what it takes for a dog to survive on the streets or in the Kill shelters. Ursu survived. He inspires us all to never give up.”

‘Ursu – Never Give up on a Dog’  has been written to raise awareness of the plight of stray dogs and to help raise funds and inspire adoptions. The book contains photography documenting Ursu’s progress, is priced at £7.99, and is available from Amazon and Waterstones.