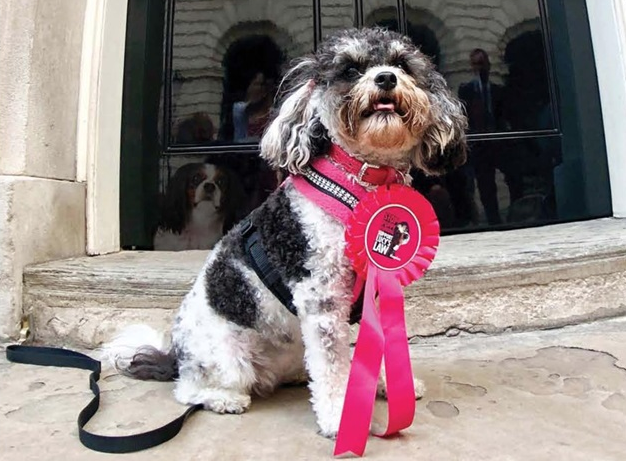 On Sunday 23 December, dogs across the UK – and abroad – received the best possible Christmas present: the announcement of a ban on the third party sale of puppies, the crowning achievement of years of campaigning against puppy farming.

The petition to implement Lucy’s Law – named after rescue Cavalier King Charles Spaniel Lucy, who spent years in a puppy farm having litter after litter with no regard for her health – smashed the required number of signatures in record time, and was discussed in Westminster last year. It won widespread support, and was backed by the Government.

In a speech last August, Environment Secretary Michael Gove said, “We will be making sure that the third party sale of pets, of kittens and of puppies, ends.

“Far too many of the pets that people, with the best will in the world, bring into their homes we know have been brought up in squalid circumstances. In circumstances of pain and suffering and misery which should never be inflicted on any living thing.

“That’s why, by making it absolutely clear that if you’re going to buy a puppy or kitten in the future, that you need to be absolutely certain that you can buy it from an ethical, regulated breeder who can show you the parent of that puppy or kitten.”

The ban on the third-party sales of puppies and kittens will deal a huge blow to the cruel trade of puppy farming; unable to hide behind a middle man, puppy farmers in the UK – as well as dealers from abroad – will find it much harder to make money from the trade, and hopefully abandon it altogether.

What a phenomenal day – ‘Ban of 3rd party sales of puppies & kittens, known as #LucysLaw, confirmed’ Official statement – https://t.co/NTN1ywU5CA #adopt Such a huge team effort, I think Lucy would be proud of each & every person that has helped 🌈 pic.twitter.com/ESsTpakt6b

“This ban on third party sales of puppies and kittens is part of our commitment to make sure the nation’s much-loved pets get the right start in life,” he said. “I pay tribute to the Lucy’s Law campaign and the many stakeholders who have passionately campaigned for this ban.

“Today’s decision builds on our previous action in this area, including banning the sale of puppies under eight weeks and tackling the breeding of dogs with genetic disorders.

“I urge anyone who is thinking of buying a puppy, or any pet, at this time of year to pause and think carefully before doing so. Pets become a part of our families and it is a decision that requires careful consideration and planning. It should not be undertaken on a whim or as a surprise. “ “Properly enforced, this will help put an end to dogs being used as breeding machines and kept in shocking conditions,” she said.

“The days of unscrupulous puppy dealers lining their pockets with no regard for animal welfare must now come to an end. This ban makes breeders properly accountable for the puppies they produce and will now give future owners the reassurance that they can adopt their new dog or cat from a safe and trusted source and ideally from a rescue centre.”

TV Vet Marc Abraham, founder of PupAid and long-time campaigner for the ban, said, “This is a real victory for grass roots campaigners as well as the UK’s dogs and cats. On behalf of my phenomenal Lucy’s Law team I thank the government, and every animal lover, ethical animal welfare organisation, parliamentarian, and celebrity that’s helped make Lucy’s Law’s ban on third party puppy and kitten sales a reality.

“The third party trade supports and sustains both legal and illegal puppy dealing, inappropriate activities suffering exactly the same negative welfare implications; effectively the puppy or kitten (and their mum) is damaged before reaching the licensed or unlicensed seller.

“Thanks to Lucy’s Law’s ban on third party dealers, every breeder now becomes accountable and transparent, prospective owners will always see mum interacting with puppy or kitten in the place they were born, and illegally smuggled pups become more difficult to sell, make it making it the first major step in tackling irresponsible dog and cat breeding in the UK and beyond.

“Lucy’s Law will help end puppy farming, protect the future health and happiness of dogs like poor little Lucy, as well as encourage prospective pet owners to adopt from their local rescue shelter too.”

The RSPCA also welcomed the decision, with deputy chief executive Chris Wainwright saying he was “delighted”.

“We believe that cracking down on unscrupulous traders, who put profit ahead of animal welfare, will provide much-needed protection for prospective pet owners and animals.

“We have always said that an end to third party sales alone would not be enough to end the puppy trade crisis and we are pleased that this is being looked at alongside enhanced licensing conditions for breeders introduced earlier this year.

“Together, we hope these moves will offer better protection to puppies and their parents and also reduce the number of families duped by rogue traders in this illegal multi-million-pound trade.

“We always encourage people to consider rehoming a rescue dog but for those who want to buy a puppy they can download a free Puppy Contract to help ensure they buy a happy and healthy dog.”