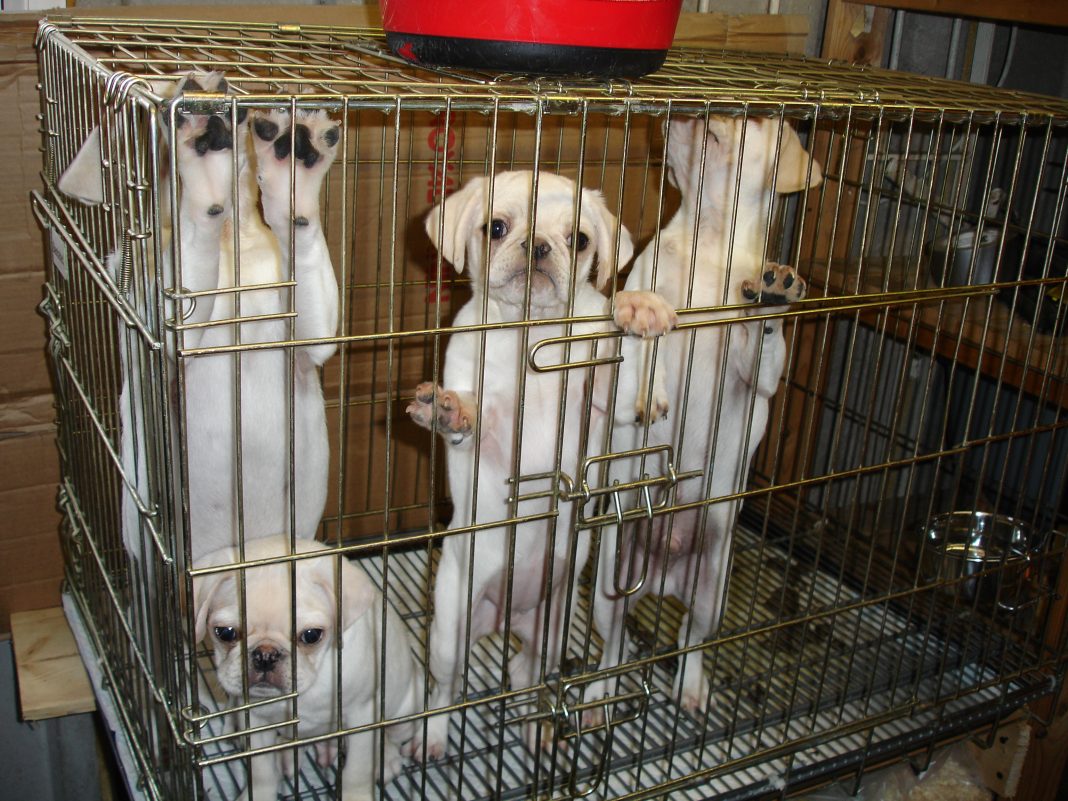 Two animal traffickers have been sentenced after being found guilty of illegally importing fashionable breeds of dog and cat in the UK, then selling them on from their cramped home in Greater Manchester.

Laura Kiseliova and Raimondas Titas were sentenced in absence at Manchester Crown Court on Thursday (13 December) after fleeing abroad. The pair are facing a total of 29 offences including several animal welfare offences, relating to a large number of dogs and cats. As part of a joint operation, on 18 November 2013 RSPCA officers attended a raid at their home in Greater Manchester. They found 41 dogs and puppies as well as eight cats living in awful cramped cages. Many were sick and needed immediate veterinary treatment.

It’s believed the pair were breeding some puppie,s as well as trafficking dogs into England from Eastern Europe under the Pet Passport scheme. They then sold the sick animals to unsuspecting members of the public under the company name of Pets 313 Ltd. Officers recovered more than 40 pet passports from the property, many of which did not match dogs found at the location, suggesting the pair were passing off trafficked dogs as bred in the UK. The raid, led by the charity’s Special Operations Unit (SOU), brought to the discovery on the property of many popular breeds including French bulldogs, bulldogs and pugs, as well as pedigree cats. The dogs were being sold for between £800 and £1,000 each.

One of the undercover RSPCA officers who led the investigation described what she found when they entered the property.

“The front room of the property was being used to sell the animals to members of the public, but it was when you entered the rest of the house that the scale of this operation became apparent. “There were cages and pens containing different breeds of dogs in almost every room, including a litter of puppies in a filthy ensuite bathroom upstairs. In a large garage at the back we found cages of animals stacked on top of each other. It was clear there were some cats and puppies that needed immediate veterinary treatment, and sadly two of the puppies that were rushed to the vets for treatment later died from parvovirus.

“There was little sign of proper isolation pens for sick animals or biosecurity measures, meaning any animal that passed through this place would be at risk of catching and spreading diseases and parasites.This was a large money-making operation at the expense of the welfare of the animals and the unsuspecting members of public who thought they were buying healthy, happy puppies.” The couple were charged with a number of offences including failing to provide a suitable environment and veterinary care for the animals, as well as breeding dogs without a licence. Kiseliova was sentenced to a total of four years in prison while Titas was sentenced for three years and six months, and both have been disqualified from keeping pets for life. RSPCA SOU chief inspector (CI) Ian Briggs said, “It was obvious that this duo were dealing and trading in a large number of animals and that many of them were not receiving the appropriate care and veterinary attention they needed. Some of the animals were suffering from problems such as conjunctivitis, gastroenteritis or had sore and infected wounds.” CI Briggs added, “We have seen a concerning increase in the number of calls we are receiving about large-scale traders dealing, predominantly, in puppies. We are regularly appalled by the conditions we find puppies living in and the stories we hear from owners who have, just days after bringing their puppy home, held their new dog as he died in their arms from preventable diseases and infections.

“Unfortunately, a major factor in this trade is traffickers – such as this pair – bringing in poorly pups from abroad, without the right vaccinations and documents, and selling them to unsuspecting buyers here in England.” Case vet David Martin said, “Many of the dogs and the cats that were removed from this address were suffering from serious infections which had the potential to make not only the puppies themselves ill but also were a significant risk to both other animals within the purchaser’s home, and to the purchasers and their families. “Great care needs to be taken when purchasing a puppy, and any puppy that is off colour or unwell must receive urgent veterinary attention.

“It is imperative that the veterinary surgeon who examines the puppy is made fully aware of the potential for the puppy to have come from a puppy farm, as many of the serious and fatal conditions that puppies from puppy farms commonly have start with very mild signs which can easily be mistaken as being related to the stress of a new home before the puppy rapidly declines, at which point it may be too late to save the puppy.”

During the investigation, many of the animas were signed over into RSPCA care and later rehomed.