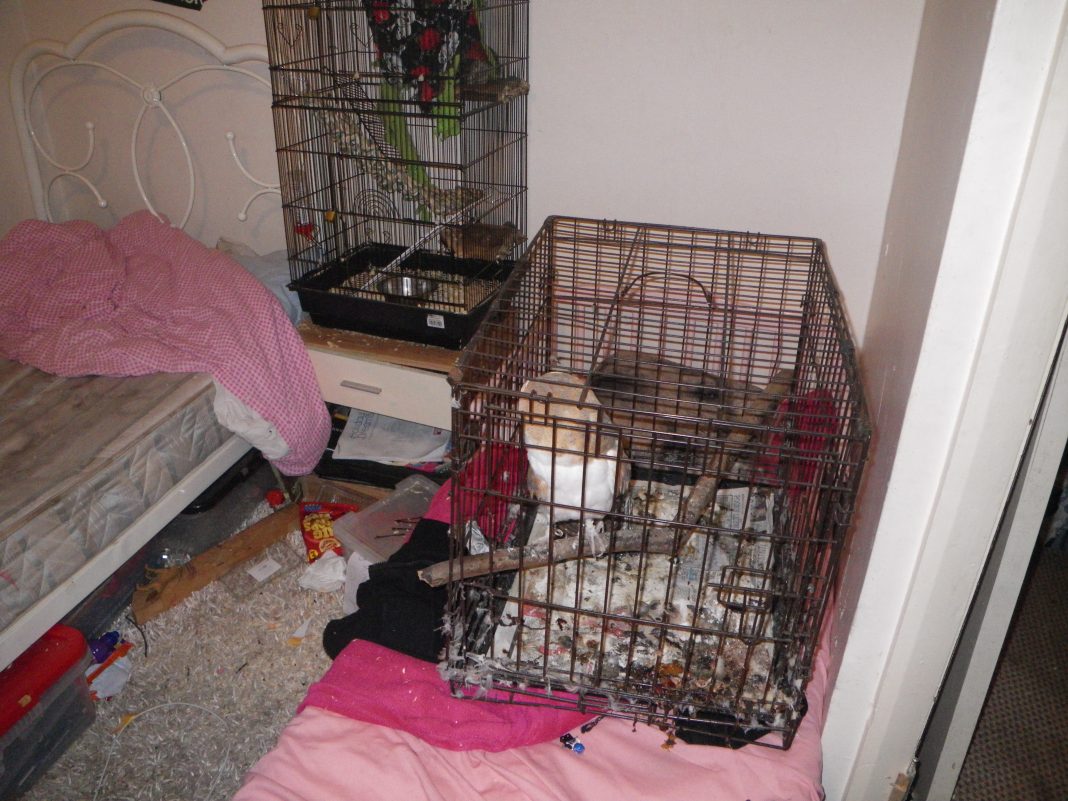 Two people have been banned from keeping animals after neglecting an array of different species, keeping them in filthy cages in their home.

It was disgusting and it was mass-scale neglect

Natalie Keenan and David Knight have been disqualified from keeping animals for three years after gas workers discovered 23 neglected animals of different species living in ‘horrifying’ conditions in their home in Staffordshire. The workers called the RSPCA and the couple appeared at The Court House in Newcastle-under-Lyme on Thursday 1 November for sentencing.

One cat, two dogs, a rat and eight degus were removed from the property along with an African grey parrot, five snakes, a bearded dragon, a lizard, a fox, a barn owl, and a raccoon dog. All were kept in tiny filthy cages and one of the dogs (pictured) was in such poor condition vets decided the only option was to put her to sleep on humane grounds. The other animals remain in RSPCA care and can now be rehomed or moved to suitable keepers. Inspector Charlotte Melvin attended the removal of the animals. She said, “When I arrived at the property the couple wouldn’t let me inside, so I waited outside for over two hours until police arrived. During that time the family carried bin bag after bin bag of rubbish out of the house.

“When I finally went inside it wasn’t what I was expecting at all. Even though they’d been clearing out for two hours it was still absolutely filthy and the animals were being kept in horrifying conditions. “There was cage after cage and animal after animal. The rooms were strewn with rubbish, all of the animals’ accommodation was filthy and their welfare needs were clearly not being met. It was disgusting and it was mass-scale neglect.”

Keenan and David Knight pleaded not guilty to nine animal welfare offences each, but changed their pleas at trial. The pair have been given a 12-month community order, including a 30-hour rehabilitation requirement. They were each ordered to pay £150 in costs and £85 victim surcharge.

“Many of these animals simply shouldn’t be kept as pets – let alone kept like this,” Inspector Melvin added.

“To see these poor animals living in such squalor was heartbreaking. I’m just glad they can all now have a second chance at find loving new homes where their needs will be properly catered to.”