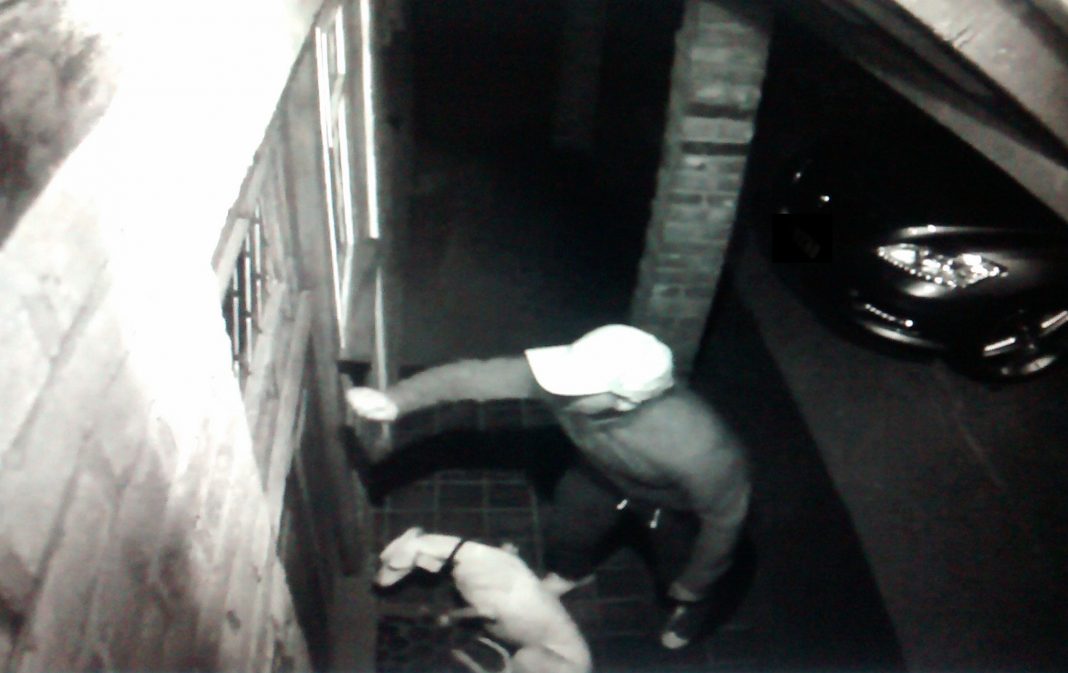 The RSPCA is investigating after CCTV captured the moment a man dumped a seriously injured dog on a stranger’s doorstep.

The animal welfare charity was called to help the night of Friday 7 September after the dog was left on the doorstep. RSPCA inspector Phil Norman went to collect the dog and is now investigating. He said, “We were contacted by a resident in Flamstead after they heard a noise at around 11pm at night and went to investigate.

“They found the dog left on their doorstep and witnessed a car leaving the scene. The dog – a white, female lurcher-type – was very frightened and had a nasty open fracture to one of her rear legs.” When Inspector Norman arrived to collect the dog the residents had reviewed their CCTV and found images of her being abandoned.

“When the caller looked back over her CCTV she realised she had captured the moment a man heartlessly abandoned her on the doorstep,” Inspector Norman added. “The man can be seen walking up the drive with the dog, onto the doorstep, and then turning around to leave the dog behind. He appears to be dressed in dark clothes with white trainers and a white baseball cap on. The dog – now named Snow White – is thought to be around four or five years old and is now being cared for by staff at the RSPCA’s Putney Animal Hospital in London.

Amanda Rooney, from the hospital, said, “Snow White has a nasty open fracture to her hind leg and the bone is sticking out, it’s awful. She’s been on painkillers while x-rays and tests are carried out.

“We’re hoping to save the leg by repairing the break with a metal plate but we’re concerned about the infection, so it’s touch and go at the moment as to whether she may need an amputation. “She’s such a sweet, gentle, friendly dog and it’s heartbreaking to think someone could coldly dump her in the middle of the night in such a state.

“Thankfully, she’s safe now and is in the best place. We’ll make sure she gets lots of TLC until she’s back on her paws and then we’ll find her the paw-fect home.”