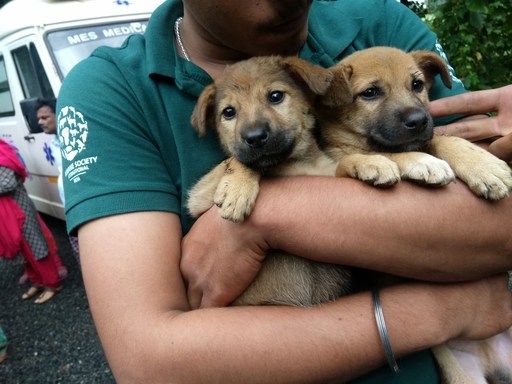 With floods and landslides ravaging India’s favourite holiday destinations such as Kerala, and Coorg in Karnataka, animal rescuers from Humane Society International/India are being inundated with distress calls from desperate pet owners who were forced to evacuate without their beloved animals. Many of the humanitarian rescue boats in the early days of the disaster refused to take animals, leaving behind hundreds of dogs and cats, especially in areas such as Kochi, Kottayam and Alappuzha where the pet population is high.

HSI/India has set up an emergency helpline to co-ordinate animal rescue throughout Kerala via its own rescuers and a network of other Indian animal protection groups in each district across the State. Pet owners are also using Whatsapp to send photos of their animals and the location of their near-submerged houses so that HSI/India can get rescuers to the scene to save the stranded pets. Additional HSI/India rescue teams are being deployed to Kerala as well as to Coorg to help cope with the scale of the rescue. Rahul Sehgal, HSI/India’s senior director of Companion Animals & Engagement says, “People here are desperately worried about their pets and our Kerala helpline is ringing day and night with pleas for animal rescue. HSI/India is working with the amazing local groups to reach as many animals as possible, as well as distributing vital life-saving equipment such as inflatable boats, veterinary medicines and food for starving animals. “Rescuers are finding many dogs stranded on the roofs of submerged buildings, or left chained up in floodwater. We are urging Kerala’s humanitarian rescue teams to allow families to bring their pets, but if people are forced to leave them behind, they must be unchained or they risk drowning. We have a good chance of reuniting families with pets who run away, but a chained animal is doomed.” HSI/India’s temporary shelter is caring for 19 dogs they rescued from the floods, along with 20 goats and eight cows. In addition, HSI is ensuring that animals in other parts of Kerala also receive help, by responding to hundreds of distress calls and Instagram posts and assigning them to local groups in the relevant areas. For example, a Dachshund called Kuttus was rescued after being trapped in a house in Kavalam, Jack the Dalmation was saved from drowning in Aluva, and Bailey an 8-month old Labrador was rescued in Chengannur after repeated attempts over four days by rescuers from ChennaiRescuers. The situation is now improving in some areas such as Malappuram where HSI/India has been operating for the past week. Amit Meena, the district collector of Malappuram, and Prateesh Kumar, the chief of police at Malappuram, have instructed the police force to save any animal they encounter. However, the situation in many parts of Kerala is still challenging. In Thrissur, Sunitha Sinto the woman with 25 dogs who HSI/India assisted last week, has been refused entry to the local relief camp with her animals, and now that she has returned to her house, the camp is refusing to provide her with food for herself or her dogs. HSI’s Sally Varma visited Sunitha today to deliver rice and dog food as well as other basic provisions. Sally Varma says, “Sunitha’s bond with her dogs is unbreakable, but she’s struggling without help so HSI was keen to check in on her so that she and her dogs don’t go hungry.”

While the waters are subsiding in some parts of Kerala, the district of Coorg in Karnataka is badly affected and HSI/India has been asked by Bangalore’s oldest animal welfare group, Compassion Unlimited Plus Action, to bring help to Coorg. The charity has deployed 10 more animal rescuers and veterinarian who will join their existing team in Kerala and also assist CUPA in Coorg. Sehgal says, “Every day our team and local rescuers are wading waist-deep through leech-infested water to check the remains of dwellings for stranded animals. Many of the animals have now starved for several days so although they are traumatised, they are visibly relieved to hear a human voice. Unfortunately many cattle trapped in barns have perished, but those goats and cows lucky enough to be saved are being well cared for at HSI’s shelter at Malappuram. “There is still a huge rescue operation taking place, but once the water subsides we will start to reach animals who have been completely cut off, and we predict we will see large numbers needing treatment for skin disease, tick fever, distemper and thousands displaced on the streets.”

HSI/India is asking for relief materials such as dry food, medicines, bedding and dog crates to be sent to Kerala, and also to Coorg, using DonateCart here Donations to HSI’s International Disaster Fund can be made here to help the charity continue providing essential rescue, veterinary medicines, food, water, shelter transport and support for this response and for other disasters around the world.