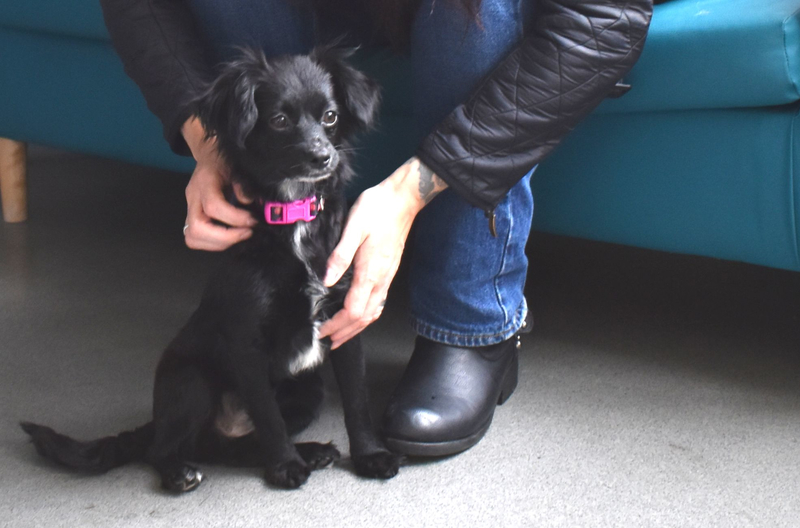 Many of us are willing to go an extra mile to find the right dog, but not everyone would travel 400 miles to adopt a rescue. Mouse was fortunate enough to find someone who would.

The little mongrel wasn’t always so lucky. When she was brought into the Battersea Dogs & Cats Home’s London centre last December as a stray she was severely underweight, with deformed back legs. It took the Battersea vet team months to treat her: she needed dental treatment as well as surgery on her leg and hernia. She was only ten months old. Meanwhile Michelle and Brad George, of Inverkeithing, Scotland, were still mourning the loss of Hugo, a Staffie cross they had adopted from Battersea in 2012. Hugo passed away in January, leaving a hole in their lives. He too had a bad start in life, coming into rescue as part of an unwanted litter and suffering from severe mange.

At first Michelle and Brad had no intention to take in another dog, but everything changed when Michelle began working from home and felt she needed some company. Soon enough, little Mouse had caught their eye – and they made a five-hour train journey to rehome her. Michelle said, “Deciding where to look for a new dog was an easy decision, Battersea is the only place we would go to now. We want to give these dogs a good upbringing and we have a lot of time to give – so why not choose a dog that needs us most?”

Mouse has made a full recovery, and is now enjoying life with her new family.