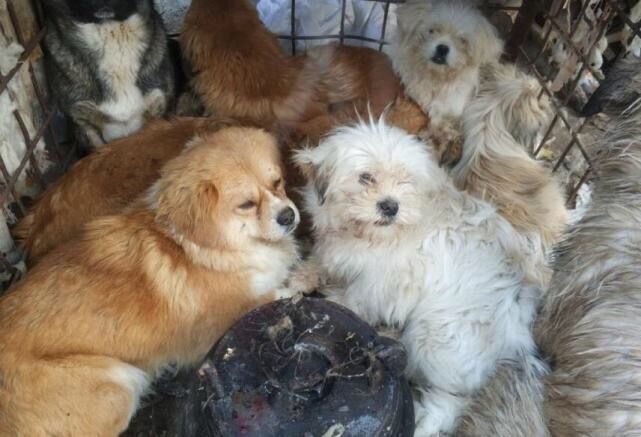 An illegal slaughterhouse in Dalian, China, has been shut down after a raid that led to the rescue of nine terrified dogs, huddled in a cage hidden amongst piles of rubbish.

Campaigners from VShine and Humane Society International (HSI) who entered the property with Dalian police, say it is likely the dogs were stolen pets as “they were so friendly despite their ordeal”.

Peter Li for Humane Society International, said, “When our team entered the property, they were faced with the dreadful sight of nine trembling dogs huddled together on the blood-stained floor of the slaughter room. The slaughterhouse itself was a disgusting, filthy sight and it was clear that if the activists and police hadn’t received a tip off, these dogs would have been bludgeoned to death like so many poor animals before them. The dogs were taken in by Chinese animal activists, who brought them at two pet hospitals. After receiving veterinary treatment before they will be moved to a HSI facility in northeast China, where they will be available for adoption. Li said, “Like many of the big cities in China, Dalian has a huge pet-owning population and I have no doubt that these dogs will quickly find forever families. It is so sad to think what torment they have been through to get here, probably stolen from many miles away before ending up in that terrible slaughterhouse.

“Most people in China don’t eat dogs and would dearly love to see China’s police forces nationwide act as swiftly to tackle the illegal dog meat trade as the Dalian law enforcement. But sadly until China creates an animal protection law, we are unlikely to see the change in attitude and actions needed.” Opposition to the consumption of dog meat is growing in China, shrinking the market for it, according to a 2015 report by the Animal Asia Foundation. A a survey on 3,221 people across 19 Chinese cities – divided in two categories, those where eating dog meat was a common practice and those where it was not – revealed that eating cat and dog meat is not a regular practice for the vast majority of people.

“Even in cities with the habit of eating cats and dogs, almost half of respondents had not eaten cats or dogs in the past two years, and of those who had, half had eaten it only once or twice a year.” Nearly half of all respondents believed that killing dogs and cats for consumption should be illegal, and almost 90 per cent had some sort of concern about dog meat – either ethical or practical ones, such as health and hygiene.