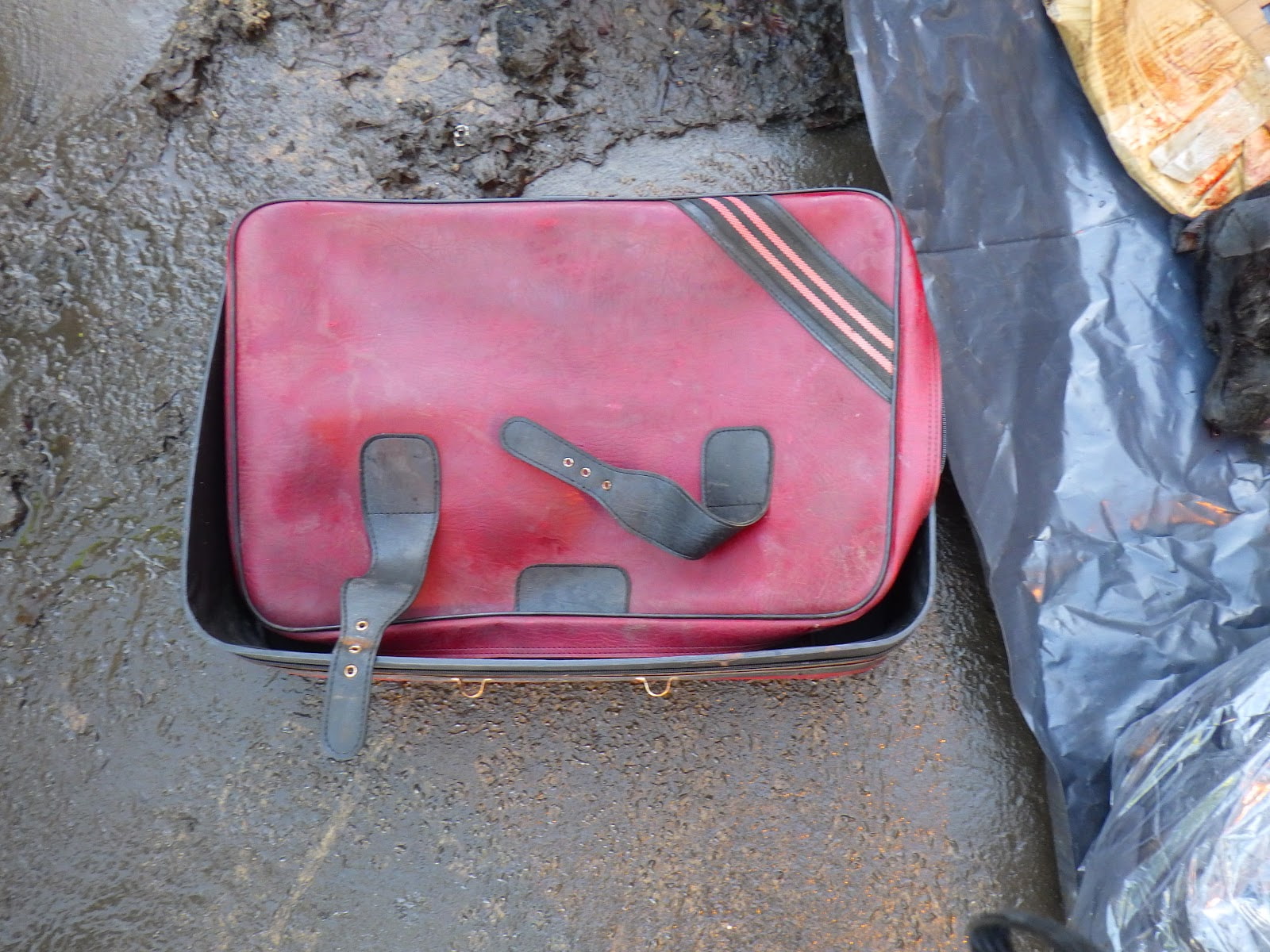 The RSPCA is appealing for information after the bodies of two dogs were found in suitcases on 24 and 26 January, in Leeds and Halifax respectively.

A four-year-old bull terrier type male, dubbed ‘Leo’, was found at 11.30am on Wednesday 24 January under some shrubs at Harehills Cemetery on Kimberley Road, Leeds. He was very emaciated, and had been wrapped in a towel before being put inside the suitcase.

According to the RSPCA, Leo was microchipped to an address in Newport, Gwent; his previous owners told inspectors that they had rehomed their dog six months earlier via the internet. It is clear that Leo suffered a lot in that stretch of time.

SPCA inspector Sarah Mason said, “He was in a shocking state with almost every bone in his body visible. The collar he had around his neck was just hanging off him. When vets weighed him he was just 11.6kg, literally a skeleton of a dog. There’s no doubt that this poor boy suffered an enormous amount before he died.” 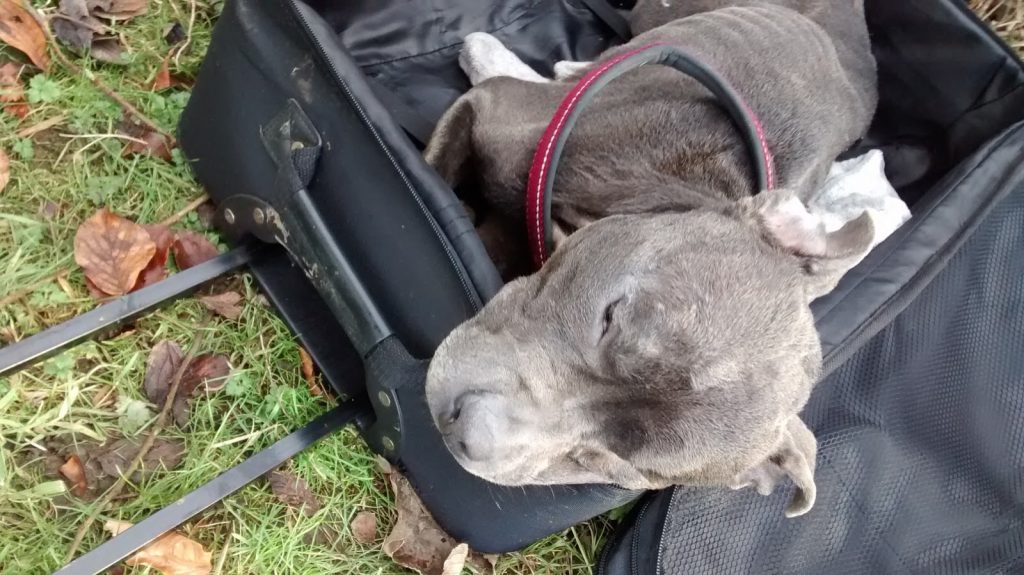 Leo was wearing a red leather Wainwright’s collar with white stitching and was wrapped in a light grey Hugo Boss towel. The case was all black apart from a silver logo in the shape of an infinity sign. The extended handle of the case was broken and wouldn’t retract. There was a pair of turquoise coloured women’s pants in a pocket in the case.

“I want to hear from anyone who recognises Leo, or can help my investigation in any way,” Mason added. “Please call the RSPCA inspector appeal line on 0300 123 8018 and ask to leave a message for me.”

Only two days later, on Friday 26 January, another dead dog in a suitcase was found a fly-tipped suitcase in Heath Hill Road, Wharley, Halifax.

RSPCA inspector Sophie John said, “The case was wrapped in black plastic and cable-tied shut. When the council workers opened it they found the dog, wrapped in plastic bags. His head had been wrapped in towels and a pillowcase which were soaked in blood.”

Unlike Leo, this dog – also a male bull type – looked strong and healthy, but was grievous wounded. His lead was wrapped around his front legs to restrain him. 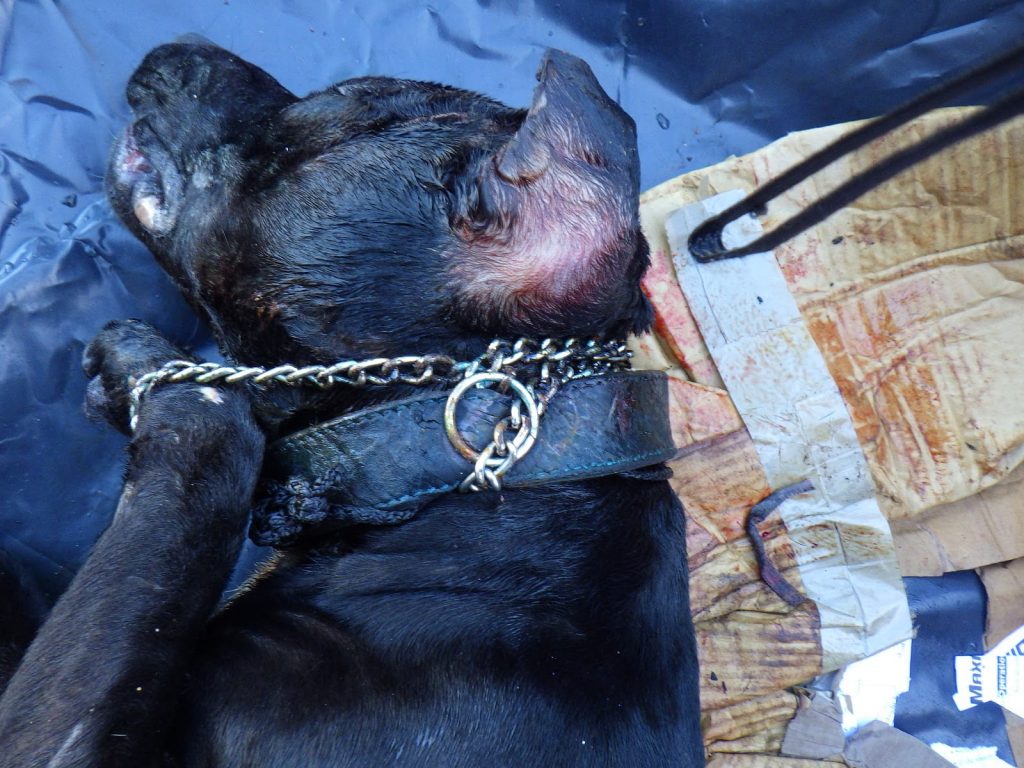 “He had a large stab wound to the head, some 2.5 inches long, caused by what we believe to have been a single sided blade,” John added. “We don’t know whether this poor boy died before or after being put inside the case but what is clear is that someone has gone to great lengths to dispose of him, very likely after brutally killing him.”

According to the vets who examined him, it is likely the dog died sometimes on 24 January – the same day Leo was found in Leeds. He had no tag nor microchip.

“He appears to have been a big strong healthy dog, presumably friendly based on him having allowed someone to restrain him as I believe he has been,” said John. “That someone could do something as utterly cruel as this makes me feel sick.”

The dog was “mostly black with a white triangular patch on his chest and stomach. He has a white patch on one front leg. The toes on both his back feet are white. The collar he was wearing was black leather and the lead was a silver chain lead. The suitcase was red and black leather with a stripe across one corner. There was a red electronics cable in the case along with bits of string, a shoelace, an old tie and some superglue”.

Inspector John added, “If anyone knows who this dog belonged to, or saw anyone dumping this case in the couple of days leading up to Friday that might help my investigation, please call me on 0300 123 8018.”