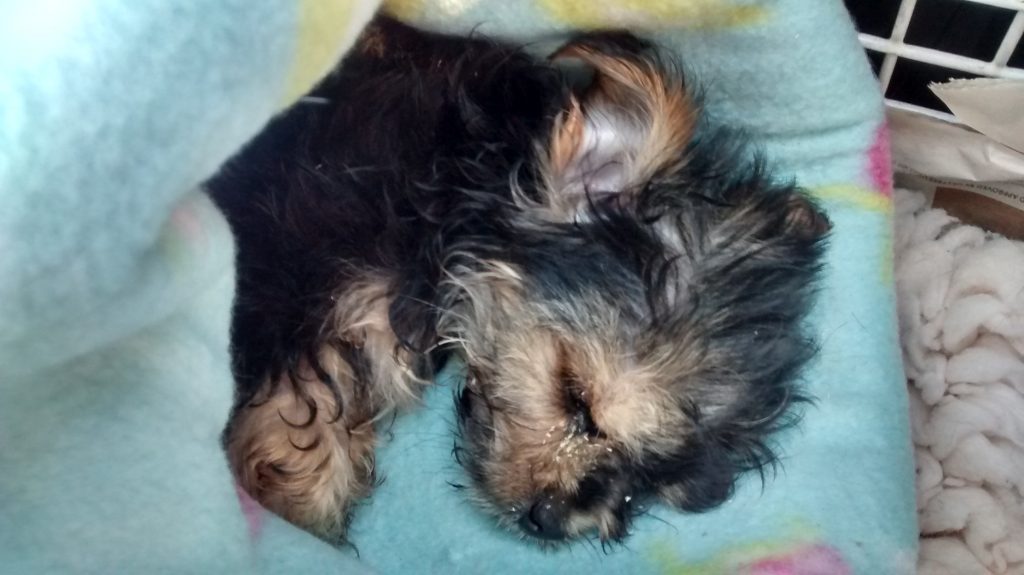 A dying ‘teacup’ Yorkie was found wrapped in a towel on Monday night, having been left on a road in Stainforth, outside Doncaster. The tiny puppy, suspected to be between 14 and 18 weeks old, was in an appalling condition, and thought to be suffering from genetic problems stemming from being a ‘teacup’, an undersized version of his breed.

RSPCA inspector Keira Benham, who went out to pick up the Yorkie, said, “The little pup was collapsed and unresponsive. He was soaking wet, struggling to breathe and couldn’t stand.

“The poor little thing was very weak and was covered in fly eggs. He was barely alive when I got to him but I took him straight to the vets.

“Sadly, he was having fits and vets said it was down to a neurological condition so they decided that the kindest thing to do was end his suffering and put him to sleep.”

She continued, “This innocent and vulnerable dog had health complications which would require considerable – and costly – veterinary treatment. It’s a sad reality that we see animals dumped like this simply because their owners don’t want to pay.

“The poor little thing needed urgent, specialist treatment but – instead of ensuring he saw a vet and was given every chance to overcome his health problems – he was dumped, like a piece of rubbish, and left to die alone and frightened.”

The RSPCA has issued a warning over the potential health problems that can come from breeding small breeds even smaller.

The charity’s dog welfare expert, Lisa Richards, explained, “Selectively breeding dogs to have exaggerated physical features – such as extremely small body size – can cause serious health and welfare problems, and may have been the cause of this poor dog’s neurological problems.

“Teacup dogs can also suffer from problems as a direct result of being so small. For example, their ﬁne bones are very vulnerable to stress fractures and they are at risk of painful fractures from minimal trauma such as jumping; they can suffer from dislocation of the kneecap, leading to pain and lameness; and can also suffer from respiratory problems that can severely limit their ability to run and exercise.

“We are concerned that many pedigree and purebred dogs are suffering because they’re bred primarily for how they look rather than with health, welfare and temperament in mind.”

This Yorkie may have been sold with the ‘teacup’ label as the key appeal, to an unsuspecting buyer attracted to such a tiny puppy – but ultimately unaware of the potential health implications.

Read more about problems of the teacup puppy market in this guest essay by anti-puppy farming campaigner Janetta Harvey: ‘The curse of cute’.