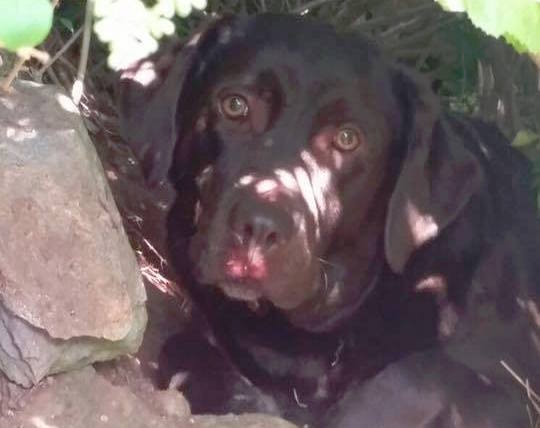 A chocolate Labrador named Rolo had quite a scare this week after she tumbled down a cliff face while out walking with her family in Devon.

Rolo’s owner reported the dog missing, and it took a joint effort by two coastguard agencies and the Torbay Lifeboats to locate her.

After an unsuccessful shoreline search by the lifeboat team, Rolo was spotted by a cliff technician after she rustled about in the bushes. A ‘dog rescue bag’ was sent down to bring Rolo back to safety, and she was reunited, thankfully completely uninjured, with her relieved family.

The Maritime and Coastguard Agency wrote on Facebook, “Remember, we want to keep your beloved dogs safe just as much as you do so always try and keep your dog on a lead near cliffs. If they pick up the scent of an animal or hear something on the coast below it doesn’t take much for them to follow their nose. Above all, if your dog does fall down a cliff or starts getting swept out to sea, please do not attempt to rescue it yourself. Nine times out of ten your dog will rescue itself and return to shore alive, but tragically some owners do not. Our Coastguards are trained in all types of rescue on the coast, including dog rescues. Let our experts get your dog safely back to you.”