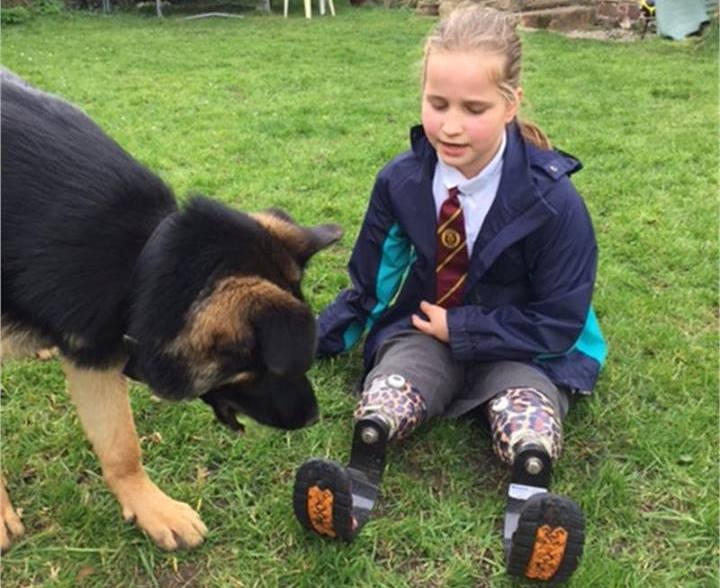 We often see police dogs as being strong, intelligent and totally fearless; muscular German Shepherds out to get the bad guys. But now police dog trainee Tag has shown this working dog’s gentler side, as his incredible bond with a disabled little girl has moved everyone who has witnessed it.

Eight-year-old Marina has congenital limb differences, meaning her arms and legs didn’t develop correctly, and she was adopted from Russia aged just two. Her parents, Jo and Gideon, are puppy walkers to eight-month-old Tag, and try and involve Marina in every aspect of his training, which they both love.

In a statement by Devon and Cornwall Police, Paul said, “It was clear to me straight away at our police puppy training days that Tag and Marina were very close. Tag is an intelligent and calm puppy and adores Marina. He seems to understand her disabilities and limitations and is incredibly gentle with her, which is amazing for a dog of his age. We have high hopes for Tag moving forward to full police dog training when he’s old enough.”

“Marina has always loved animals, but her relationship with Tag has improved her confidence. She loves telling people about him and that she is helping to train him to be a police dog. She is also more aware of routines due to needing to think about when he needs a walk, feeding etc. They’ve become so close she even asked if she could be his main carer.”

Although the family will undoubtedly be a little sad to see Tag move on and pursue his career, Marina already has her sights set on another furry friend – and requests a dog small enough to sleep on her bed this time!