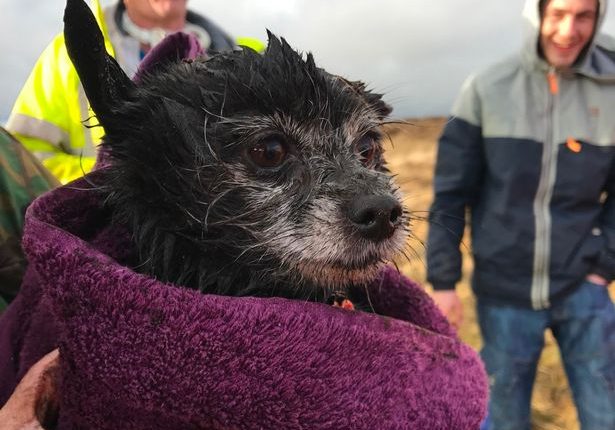 A tiny Chihuahua cross by the name of Cherry has been rescued following a drone search, after she became trapped down a mountain hole having gone missing for five days. The little dog went AWOL last Wednesday whilst chasing sticks near Cwmtillery Lakes near Abertillery, and was only found after a thermal imaging camera scanned the surrounding area of Blaenau Gwent.

Cherry’s owners had immediately recruited the assistance of Cwmbran-based aviation firm Resource Group to help look for their lost pet who thankfully was eventually detected. The staff from Resource Group joined forces with the RSPCA, Gwent Police and South Wales Fire and Rescue Service to dig their way through an old mining tunnel, managing to rescue the five-year-old dog on Monday.

Cherry’s owners were desperately hoping to find her and created a Facebook page to raise awareness of their lost pet. The page was liked by just under 2,000 people and more than £1,200 was crowdfunded to help aid the rescue mission. Resource Group were able to use a drone which then spotted Cherry at around 4pm on Monday afternoon – she was rescued half an hour later, almost five days after she disappeared.

Cherry’s owner and RSPCA animal care assistant Katinka Slingsby, from Pontypool, said,“It’s absolutely amazing. My dad was out with her walking up the mountain in the early evening throwing sticks for her, and then she just disappeared and he didn’t know where she went.”

John Larkin, spokesman for Resource Group Unmanned Aviation Services had the following to say on the rescue mission, “We are delighted to have been able to reunite Cherry with her owner. Using thermal imaging cameras mounted to one of our unarmed aircraft we were able to locate Cherry within 20 minutes.

“This just goes to show the wide spread applications of drone technology from aerial inspection and surveying to search and rescue situations, highlighting the breadth of our Unmanned Aviation Services.”

Last Sunday dozens of people walked upon Mynydd James hill to help support the search for Cherry despite the harsh weather conditions. A few of the searchers heard five yelps, giving the rescue party reason to hope that Cherry was still alive. This prompted a statement on the crowdfunding page which read, “We cannot be 100% sure it is Cherry as we did not see her but there was nobody else up there and we truly believe she is still at the top of the mountain.”

After Cherry was spotted, the search party were able to rescue her from a disused mining tunnel before she was immediately taken to a nearby veterinary practice. Donations made to Cherry’s Go Fund Me page – initially raised to pay for a search helicopter – will now be donated to a local charity.

Katinka was relieved to hear of her dog’s survival saying, “She went to the vets last night and she’s all healthy. She’s a bit bruised and tired obviously, but the vet was amazed how well she was.

“Animals are my life, I work with them and spend my spare time with them. We are so grateful that we have Cherry back. At the moment, she’s on a strict lead, and she’s grounded for the time being!”

She added, “People say that social media is the death of community but you have proven them absolutely wrong. I have never experienced community like this and you should all be so, so proud of what you have achieved.”

Gwent Police and Katinka’s colleagues from the RSPCA also helped with the rescue effort. Gwent Police Inspector Lysha Thompson who helped the rescue operation had the following said, “We received an e-mail from the family on Monday explaining the search for Cherry and the tremendous community support they had been receiving through their Facebook campaign. On reading this and looking at the circumstances over the past five days, it was quite clear that we needed to help, not only to help find Cherry but to also minimise the risk to those that were turning up on a daily basis, often in treacherous conditions, to assist in the search for Cherry.”

“The response I received from our partner agencies including the Fire Service and Search and Rescue teams was phenomenal!” she added.

“The RSPCA and police officers who also attended, were able to respond quickly to the sighting by the drone, the result being a really happy ending for all, not least Cherry!

“The positive outcome was clearly driven by members of the community who pulled together with the family over the past few days and they should all be incredibly proud of themselves.

“Whilst the Police have many priorities, there are none greater than being there to help people when we can and my colleagues and I are just incredibly glad that Cherry is back home.”