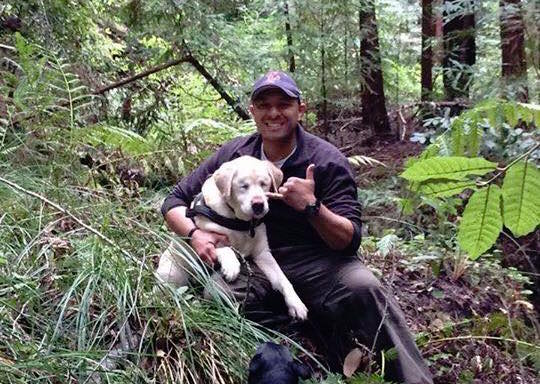 When Sage the Labrador disappeared from her garden in a rural neighbourhood in the Santa Cruz Mountains, her devastated family held little hope of finding her alive. At 12 years old and completely blind, Sage wouldn’t cope well out in the wilds of California all alone. Nevertheless, the Cole family and their friends and neighbours keep searching for her, putting posters up and spreading her photographs on social media.

After Sage had been missing for seven full days, her family were slowly starting to accept that they may never see her again – and then something amazing happened.

Dan Estrada, a neighbour of the family, was out on a hike, and spotted Sage laying by a stream at base of a steep slope in the mud. He assumed the dog was dead; she looked completely lifeless. Nevertheless, he jumped into the stream to get her, and was shocked to see Sage lift up her head to him wearily!

As she was too weak to walk, Dan carried Sage across his shoulders, back up the slope and out of the woods to her family.

Hero Dan even refused the $1000 reward Sage’s family had put up, insisting it be donated to a local animal rescue charity instead. Sage has been checked over by a vet, and is in good health despite her ordeal.

It just goes to show you should never give up hope!