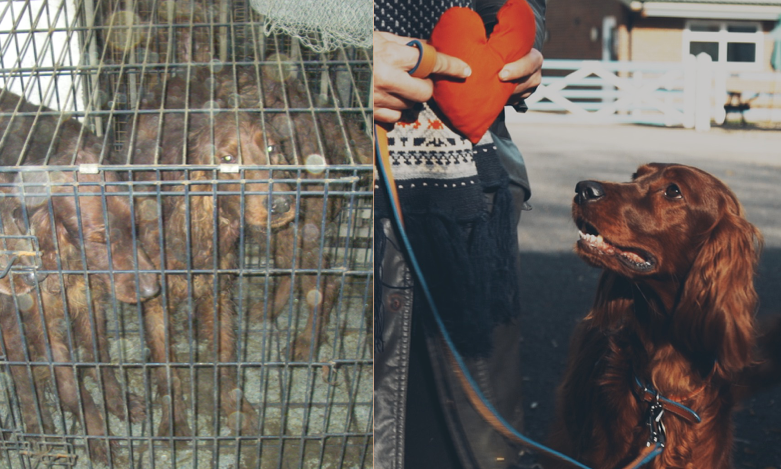 The RSPCA’s festive video, ‘Give A Little Love’, which shows a rescue dog finding her forever home at Christmastime features a real life success story: Bridie, an Irish Setter who found her second chance thanks to the RSPCA.

In 2014 Bridie was found living in squalid conditions at the home of cruel and uncaring backstreet breeders. She and thirteen other adult Irish Setters were kept in filthy, cramped cages in the house’s kitchen and bathroom, and even out in the shed, and lived without access to water, food or clean bedding. Bridie was in a terrible state: covered in faeces with a matted coat, and suffering with dehydration and a number of injuries. The neglectful owners were sentenced to six months in prison, and banned from keeping animals for life.

It took poor Bridie a year to recover from the ordeal, both physically and emotionally, and she now lives with Dr Julia Wrathful, who is Chief Scientific Officer at the RSPCA and takes Bridie with her to work.

Julia, who also features in the video, said, “Bridie is a fabulous example of how, when shown a little love, animals can be completely transformed, leaving behind the past and giving so much back to us. When she was first rescued, Bridie was terrified of the outside world and very nervous and skittish. But she has blossomed into a fantastic, friendly, affectionate, and happy dog. She is a testament both to the inspectors, vets and animal centre staff who rescued and cared for her, and to her own resilience and willingness to give life – and humans – a second chance.

“Her wonderfully positive nature has shone through, despite the horrors of her former life. I am delighted that Bridie has featured in this video. She is so inspiring and I feel really privileged to have her in my life.”

The campaign film was made by the charity’s broadcast team, and was filmed at two RSPCA centres in November. It features several staff members and a number of rescued animals currently looking for homes, as well as glossy Bridie in the starring role. It was uploaded on 6 December – and has since been viewed over 180,000 times across social media.

You can watch the video in full here: