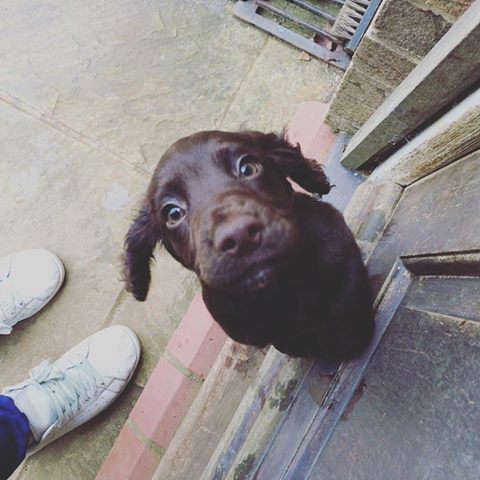 *Update, Monday 3 October: Poppy has been found, following a tip off to the police. She is home and a police investigation is ongoing.*

A week after she was taken from outside her home in East Haddon, missing Cocker Spaniel Poppy has been re-issed an appeal by Northamptonshire Police.

The chocolate brown puppy disappeared just before 4.30pm on Wednesday 21 September, and driven away in a white van. Police believe she may have been taken to the Harlow area of Essex later that day but a week later she could be anywhere in the country.

“I can’t describe how awful the last few days have been,” says Poppy’s owner, Gilly. “We miss Poppy desperately. There’s a huge, gaping hole in our lives at the moment. All we care about is getting Poppy home where she belongs. There is a no-questions-asked reward for Poppy’s safe return.”

A Facebook page was started within hours of Poppy’s disappearance. It has been visited by millions and the pinned post describing Poppy’s appearance has been shared 55,000 times.

“Amid the despair and sadness we feel, I can’t describe how touched we’ve been by the response to Poppy being taken,” says Gilly. “The kindness of people, many of whom are complete strangers, has been truly humbling.”

Poppy is nearly six months old but small for her age. She is microchipped and docked. She has a few white hairs under her bottom lip and was wearing a red collar when she disappeared.

The family are appealing for anybody with any information, however insignificant they believe it might be, to please come forward. “We’d also ask that whoever has Poppy now – even if you bought her in good faith – to please leave her somewhere safe, such as a vets, or to get in touch with us. We don’t care about who took her or why, we just need Poppy back home with her family,” says James, Gilly’s partner.

Northamptonshire’s Police appeal can be seen at www.northants.police.uk/#!/News/28808 and via the Facebook page