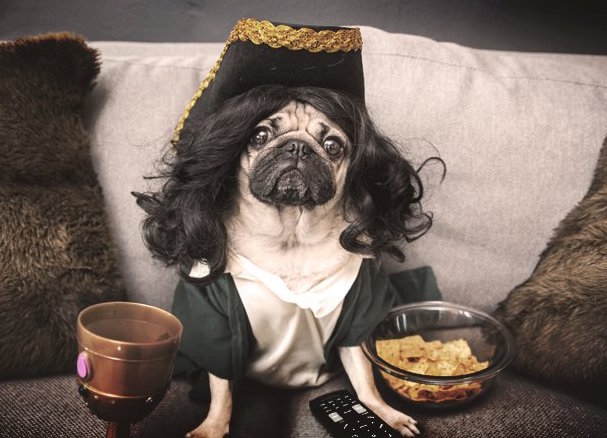 The BBC’s hit drama Poldark made its long-awaited return to our television screens on Sunday, and there was a new four-legged edition to the cast: Horace, a Pug, carried by actress Gabriella Wilde as a prop to hide her increasing baby bump during filming.

You have to question the BBC’s choice of breed, and individual dog, ethically speaking. Yes, the Pug was a popular choice for aristocrats of the age, but it was a far different beast than the ones cropping up on your Instagram nowadays. Today, every element of the Pug had been exaggerated to the point of ill-health and unease. It has shorter legs, less neck, tighter tail curl, a wider barrel of a body, and, crucially, a far, far flatter face. This nearly non-existent muzzle causes bulging, easily-infected eyes, rotten teeth from pressing them all together in the jaw, and horribly hindered breathing. The nostrils are pinched, and any air the Pug may be able to pull in is stifled by a likely elongated soft palate and narrow trachea. In short, we have managed to pack all the components of wolf’s muzzle (including 42 teeth!) into a teeny, tiny space.

It wasn’t always this way; a Pug of Poldark’s day would not have suffered to nearly the same extent. All the recognisable elements of the Pug can still be seen in paintings of this ear, but in a far more subtle style. Fast-forward a few hundred years, and we’ve created a monster.

But the BBC then went one step further, and inexcusably so. Capitalising on the presence of this fashionable breed in their show, the Beeb appears to have employed the services of a social media superstar, the American Doug the Pug, to promote Poldark, and spread this video, embedded below, across its social media channels.

The hair
The horse
The love triangle
Inspired by his distant cousin Horace, @itsdougthepug has gone totally #Poldark pic.twitter.com/xbo3VNL9yb

Doug’s owner seems to have made a successful career of dressing up this dog and parading him about in parody videos and photos with witty captions. They are often entertaining and clever, and his image is appealing; the endeavours rack up millions of likes and comments from fans around the world. But not everyone is convinced.

Jemima Harrison, creator of the Pedigree Dogs Exposed documentary that actually led the BBC to stop broadcasting Crufts, writes, “Doug’s owners have absolutely shamelessly pimped this dog but he is a poor example of the breed. He has pinched nostrils (which prevent the dog from breathing properly), he’s panting badly and is clearly in some respiratory distress. The music covers what would be noisy breathing (as indeed it does in all the Doug the Pug videos).”

Harrison’s latest project, CRUFFA, the Campaign for the Responsible Use of Flat Faced Animals in Advertising, takes aim at those companies cashing in on the public’s love of brachycephalic breeds. Pugs, Frenchies and British Bulldogs are everywhere these days, telling us what to buy, wear and watch, and this constant parade blinds us to the suffering of these animals, normalising deformity and promoting suffering.

Tell the BBC to take down the video. It’s a huge step backwards for a broadcaster that only a few years ago took such a landmark stand against unethical breeding.

Featured image via Twitter/BBC One