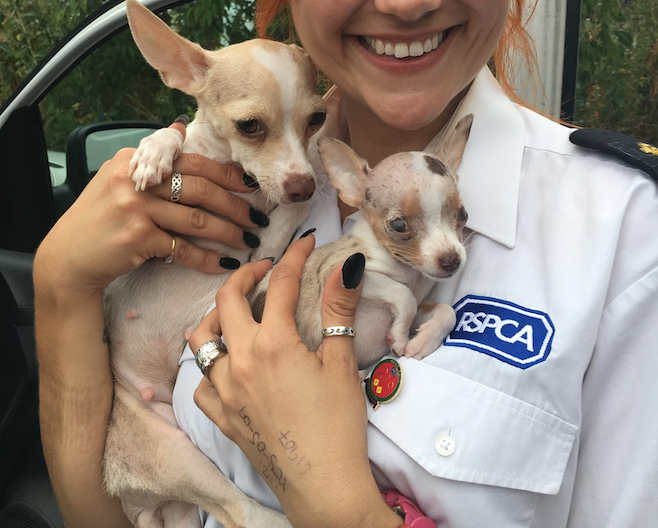 These two Chihuahuas were found having been dumped on 31 August on the A217 in Basildon, Essex, UK. They are a mother and a six-week-old pup; Mum is missing a foot, and the puppy is nearly blind, and is suffering from suspected Hydrocephalus (fluid on the brain), a condition commonly found in poorly-bred miniature breeds.

Could it be that the mum can’t produce anymore puppies, and the last of the litter, being in such poor health couldn’t be sold? Are these dogs a backstreet breeder’s ‘wastage’? Where is the rest of the litter? These are the real victims of buying puppies without the proper research and care.

Peggy and Pip Squeak, as they are now called, are now in the care of the RSPCA’S Essex South, Southend & District branch.

RSPCA inspector Marie Hammerton said: “We’d like to hear from anyone with any information about how these poor little dogs came to be abandoned by the side of a busy road.

“If anyone knows who may have dumped Peggy and Pip Squeak, or thinks they know where this pair may have come from, please get in touch by calling the RSPCA inspectorate appeal line on 0300 123 8018.”